Now that the coronavirus pandemic has started to spread across the globe at an alarming speed and is accelerating every day, with infected clusters emerging in South Korea, Japan, Italy and Iran… 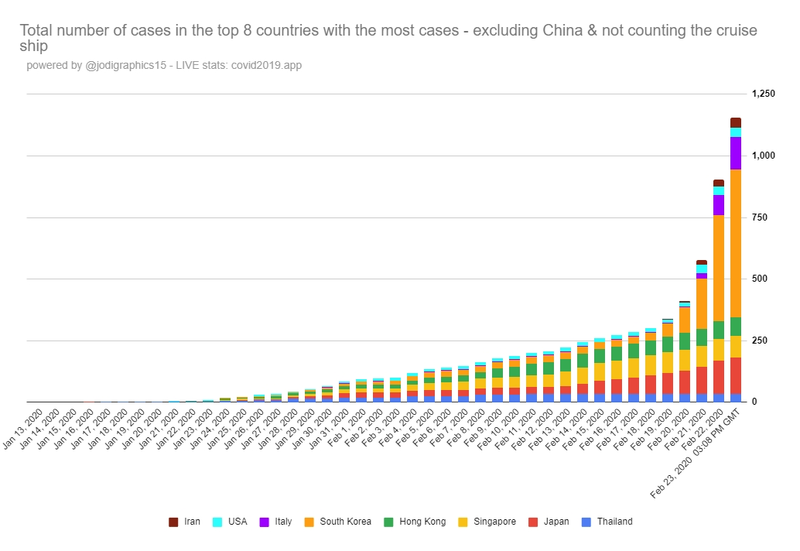 … and with more people dying from covid-19 outside of China, questions are again swirling what the real source of the pandemic was, and this time – with countless lives at stake – China will no longer be able to give a vague, undefined response like “oh, someone ate a bat at the primitive food market in Wuhan“, especially if Beijing has decided that it will soon need a scapegoat to distract the increasingly furious population from its own disastrous handling of, and ongoing lies about, the viral pandemic.

In that vein, we found it fascinating that none other than China’s nationalist propaganda mouthpiece, the Global Times, published a report overnight which dramatically changes the narrative, namely that a “New Chinese study indicates novel coronavirus did not originate in Huanan seafood market.”

According to the brand new study by Chinese researchers published on Feb 21,  the novel coronavirus may have begun human-to-human transmission in late November from a place other than the Huanan seafood market in Wuhan. Of course, we already knew that, but what is critical is that until now, Beijing was adamant in sticking to the official narrative that it was the Huanan seafood market in Wuhan where the disease emerged, despite not providing any information on what animal was the vector, or who was patient zero. 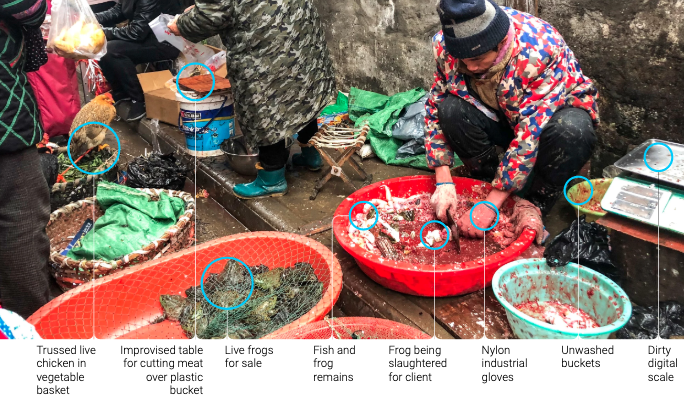 However, now that this narrative has been officially questioned and challenged in a media outlet of the communist party, it is safe to say that the theory of the Huanan food market being the source of the pandemic, is officially dead.

The study published on ChinaXiv, a Chinese open repository for scientific researchers, reveals the new coronavirus was  introduced to the seafood market from another location, and then spread rapidly from market to market. The findings were the result of analyses of genome-wide data, sources of infection and the route of spread of 93 samples of the novel coronavirus collected from 12 countries across four continents.

The study believes that patient zero – who has not yet been identified, and whose identity holds the key to unraveling the mystery of the coronavirus source – transmitted the virus to workers or sellers at the Huanan seafood market. The crowded market facilitated the further transmission of the virus to buyers, which caused a wider spread in early December 2019. According to the researchers, the new coronavirus experienced two sudden population expansions, including one on January 6, 2020, which was related to the Chinese New Year’s Day holiday. 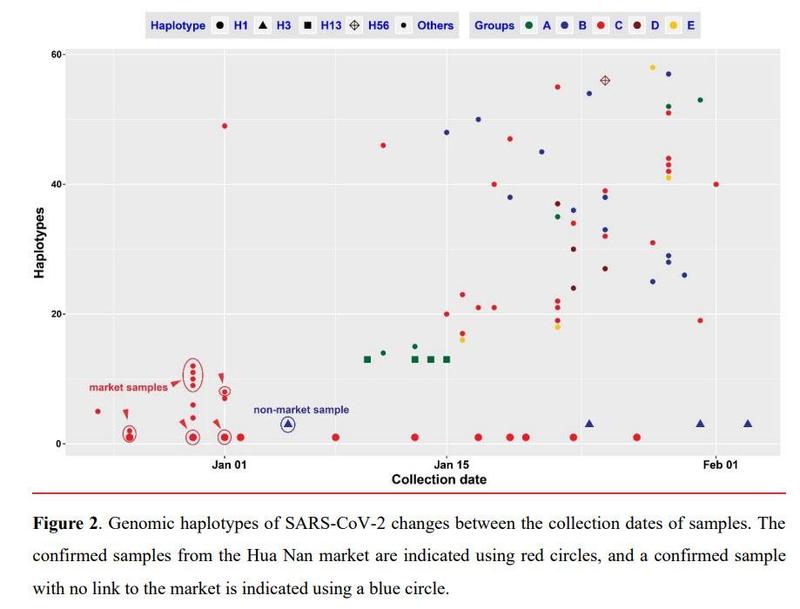 An earlier expansion occurred on December 8, implying human-to-human transmission may have started in early December or late November, and then accelerated when it reached the Huanan seafood market. Patients from Australia, France, Japan and the US – countries with wider samples – have had at least two sources of infection, and the US in particular has reported five sources, the study said.

However, based upon limited samples in other countries, the source of most infections is deemed to be the same. In addition to their contact history with Wuhan, some may have been infected in South China’s Guangdong Province and Singapore, according to the report. 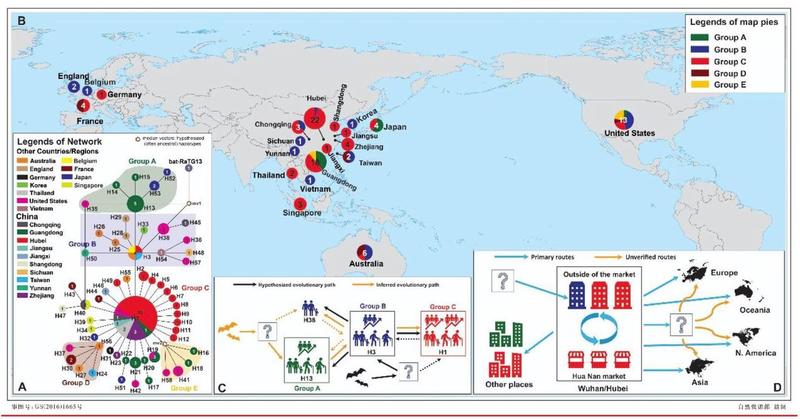 On January 6, the National Center for Disease Control and Prevention (CDC) issued a second-level emergency response, which the researchers said served as a warning against mass public activity and travel.

And in a surprising rebuke of Beijing’s handling of the epidemic, one which was implicitly endorsed by the Global Times, the researchers writes that if the warnings had received wider public attention, the number of cases spreading nationally and globally in mid-to-late January would have been lower.

While the Chinese report did not go so far as to offer alternative theories where the virus may have originated, we find it amusing that the very first comment to the Global Times article is rather tongue-in-cheek suggestion of what the real answer may be.

It is also worth noting that at the same time that even China was questioning the official narrative, the NY Post published an article which sound vaguely familiar: “Don’t buy China’s story: The coronavirus may have leaked from a lab” in which the author writes “the evidence points to SARS-CoV-2 research being carried out at the Wuhan Institute of Virology. The virus may have been carried out of the lab by an infected worker or crossed over into humans when they unknowingly dined on a lab animal. Whatever the vector, Beijing authorities are now clearly scrambling to correct the serious problems with the way their labs handle deadly pathogens.”

The conclusion: “China has unleashed a plague on its own people. It’s too early to say how many in China and other countries will ultimately die for the failures of their country’s state-run microbiology labs, but the human cost will be high.”

While that conclusion is most likely accurate, the question now is who gets the blame, and why the sudden change in the official Chinese narrative. If, indeed, it is now Xi Jinping’s intention to shift attention away from Beijing’s disastrous handling of the pandemic and pin the blame on someone else, there is only one entity that he can choose: the Level 4 microbiology lab that is equipped to handle deadly coronaviruses, called the National Biosafety Laboratory, which – as we first pointed out several weeks ago – is part of the Wuhan Institute of Virology.

And speaking of genetically engineered viruses, it is worth reminding that none other than Nature in 2015 described an “experiment that created a hybrid version of a bat coronavirus” which has “triggered renewed debate over whether engineering lab variants of viruses with possible pandemic potential is worth the risks.”

In an article published in Nature Medicine on 9 November 2015, titled “A SARS-like cluster of circulating bat coronaviruses shows potential for human emergence” and one of whose authors was Shi Zhengli, the top researcher at the Wuhan Institute of Virology, we read how researchers created a chimaeric virus, made up of a surface protein of SHC014 and the backbone of a SARS virus that had been adapted to grow in mice and to mimic human disease. The chimaera infected human airway cells — proving that the surface protein of SHC014 has the necessary structure to bind to a key receptor on the cells and to infect them.

Although almost all coronaviruses isolated from bats have not been able to bind to the key human receptor, SHC014 is not the first that can do so. In 2013, researchers reported this ability for the first time in a different coronavirus isolated from the same bat population2.

The findings reinforce suspicions that bat coronaviruses capable of directly infecting humans (rather than first needing to evolve in an intermediate animal host) may be more common than previously thought, the researchers say.

But other virologists question whether the information gleaned from the experiment justifies the potential risk. Although the extent of any risk is difficult to assess, Simon Wain-Hobson, a virologist at the Pasteur Institute in Paris, points out that the researchers have created a novel virus that “grows remarkably well” in human cells. “If the virus escaped, nobody could predict the trajectory,” he says.

A little over 4 years later, we now know exactly what the trajectory is, if indeed the coronavirus is the outcome of the same experiments Nature described back in 2015.

And in this context, we wonder if once Beijing does flip and points the finger to the Wuhan Institute Of Virology, especially now that the CDC is on the ground and doing its own analysis where the virus originated as per White House guidance, whether Twitter, which has decided to emerge as the arbiter of absolute truths related to the coronavirus epidemic, will also be forced to revise its own history of banning those who dared to speak up and predict the shape of the narrative ahead of time?

The full Chinese report published on ChinaXiv is here.