Cop arrested in prostitution sting is set to get $10,579 a month in paid leave

By Arin Mikailian / http://mistressnayomi.tumblr.com
A  Glendale police sergeant arrested last month for allegedly soliciting a prostitute will make more than $10,000 a month on paid leave until he retires at the end of 2015, records show.

The arrangement was reached months before Sgt. Vahak Mardikian’s arrest during an investigation of a Nevada prostitution ring, the Glendale News-Press reported. 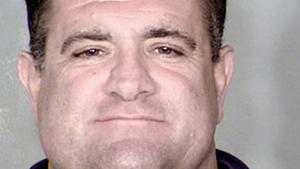 Las Vegas Metropolitan Police Department
Glendale police Sgt. Vahak Mardoun Mardikian was charged with soliciting an undercover Las Vegas police detective at the Flamingo casino. (Las Vegas Metropolitan Police Department)
Mardikian was one of five officers who filed a lawsuit in 2010 against the Glendale Police Department alleging discrimination, retaliation and harassment because they’re Armenian.
He was demoted in early 2012 following claims that he was pressuring fellow officers to join the lawsuit, but he successfully appealed and was reinstated last year.
Under the settlement deal, Mardikian will receive $10,579 a month in paid leave through Dec. 29, 2015, after which he will be required to retire from the police department, according to settlement documents.
“There is always a risk of a bigger payout if a case proceeds to trial,” Glendale City Atty. Mike Garcia said in an email. “In this case, there was also a risk of attorneys’ fees if Mardikian recovered any amount of money.”
The 49-year-old will be eligible for his retirement through the California Public Employees’ Retirement System. The city will also pay Mardikian an additional $24,792 to be distributed over a one-year period, while the city’s insurance company, AIG, will pay $250,000 to his attorneys, according to the settlement.
Meanwhile, Mardikian is due in a Nevada courtroom on Oct. 22 after he was booked in the Clark County jail for allegedly offering an undercover vice detective $250 — plus $25 in gas money — for sex.
Garcia would not comment on whether Mardikian’s arrest in Nevada would have any effect on his settlement, saying it was a personnel matter.
Glendale police Chief Rob Castro said that once Mardikian’s misdemeanor case in Nevada was over, there would be an internal police department investigation, but he did not say what sanctions Mardikian might face, if any.