As Europe struggles with a “third wave” of COVID infections that’s forcing more governments to reimpose at least some lockdown measures, the US is finding that the number of newly confirmed cases is climbing again, with some of the biggest week-over-week increases seen in states that had been praised for their vaccination diligence. 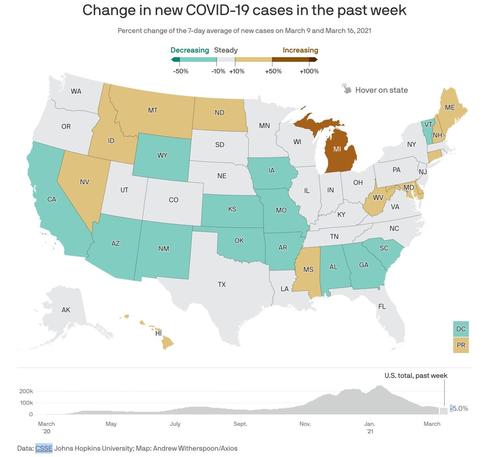 The US is adding roughly 55K new cases per day, a level that it has plateaued over the past months (though deaths have continued to move lower). Yesterday, health authorities counted 56.9K new case, and 1,052 deaths. 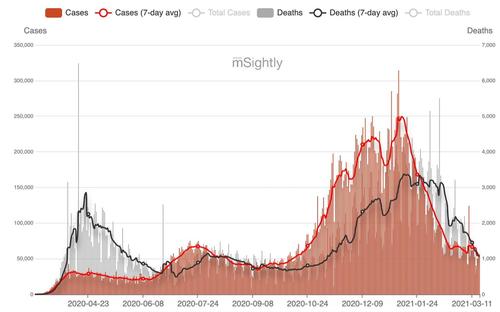 COVID cases are spiking in 13 states over the past week. The rebound in new cases in states like Michigan (which is leading the country over the past week with a 53% spike in new cases) Nevada, Maryland and Connecticut are raising concerns about whether new variants discovered in New York State, along with other variants like the Kent Strain (B117) and other international strains.

Notably, Michigan is above the US average in terms of its vaccination rate according to Johns Hopkins Data. State officials are blaming variants for the surge, citing a similar dynamic seen recently in Florida and New York. Other states among the highest in vaccination rates—including West Virginia, Maine and Montana—are also dealing with case spikes. Of the 13 states with rising cases, only two – Mississippi and New Hampshire – have below-average vaccination rates.

New data from the CDC indicate that the California strain accounted for 13% of all new coronavirus cases that were genetically sequenced as part of a new federal program in late February. An additional 7% of the samples were the strain from the UK.

As the US tops 115MM vaccine doses given, here’s a look at how close each US state is to vaccinating 100% of its population. 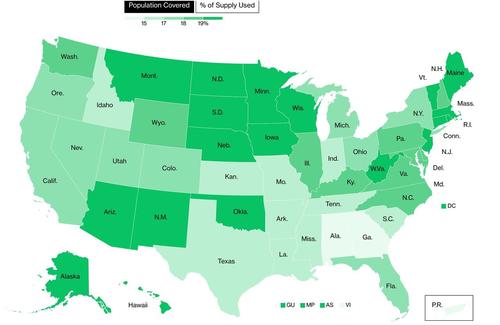 In other news, NY and NJ have continued to ease restrictions on restaurants and indoor dining as restrictions are expected to loosen further heading into next month.

Circling back to these new strains, scientists and health officials are on edge because both the UK and Cali strains spread more easily than their predecessors and seem to be more resilient to some of the medicines used to treat COVID-19. The California strain has also shown signs of resistance to the current crop of COVID-19 vaccines, which is just a reminder that a second generation of jabs is already being designed. Studies have found that the California strain, which is one of two new strains first sequenced in the US, is 20% more infectious than other strains.

It’s just a reminder that while President Joe Biden keeps talking about families and friends gathering to celebrate July 4 without masks, there’s reason enough to worry about another surge in new cases.