Most of the Empire State’s residents probably see the delta variant as a nuisance – but we suspect Gov Andrew Cuomo sees it as an exciting opportunity. Because in a press conference that carried the whiff of his daily briefings from the depths of the crisis last spring and summer, Gov. Cuomo asked private businesses in the state to enter “vaccine only admission”.

“Private businessess…I am asking them, and suggesting to them…go to vaccine only admission,” Gov. Cuomo said. “I believe it’s in your business interest to run a vaccine-only establishment.”

In another obviously political calculation, Cuomo made the statement hours after the local press reported that Mayor Bill de Blasio is reluctant to impose another mask mandate on the people of NYC (though the CDC has already imposed a mandate of its own). Clearly, Cuomo – who managed to survive twin scandals involving lying about the number of deaths in NY State’s nursing homes and sexually harassing a platoon of aids (and wedding guests) – sees delta as an opportunity to burnish his reputation as a leader. Though we doubt the legislature will return to him the unilateral powers that enabled Cuomo to choke the state’s economy with some of the most restrictive rules in the country.

Perhaps he didn’t consider the ramifications of this approach, but if all private businesses adopted this policy many unvaccinated people might have trouble buying food. One in eight black New Yorkers would be unable to shop, per NYC’s own data. 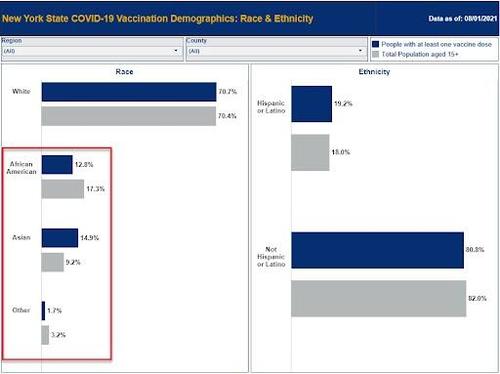 Cuomo held the press conference as the number of daily COVID cases topped 2K for the first time in months.

GOV. CUOMO: “Private businesses… I am asking them, and suggesting to them, go to ‘vaccine only’ admission.”

So far, most New Yorkers haven’t had a reason to carry around their vaccination cards (which, remember, they were warned not to lose). But pretty soon, that’s about to change – in keeping with Cuomo’s strategy to deflect blame for the most onerous delta-inspired measures.

Make the people hate the companies, not those in charge

Cuomo also added that New York is the first state in the country to require hospital personnel to get vaccinated (they must get vaccinated, they aren’t allowed to simply be tested on a regular basis).

Beginning Labor Day, all @MTA employees & NY employees of the Port Authority will be required to either be vaccinated or get tested weekly.

Amid the growing threat of the #DeltaVariant, this precaution will help ensure the health & safety of these dedicated workforces.

He offered some insight into his reasoning.

“If you’re a nurse…and you’re dealing with hundreds of people…you should be vaccinated,” Cuomo said. Legally, Cuomo can only impose this on state-run hospitals. He loudly proclaimed the policy should be spread to all hospital workers (including those run by NYC).

Cuomo added that he believes all teachers and health-care workers should be required to be vaccinated, but he acknowledged the decision is up to local authorities. At one point, he said that even masking might not be enough to protect school children, hinting at the possibility of another year of hybrid education.

The government openly pressuring corporations to engage in widespread segregation and discriminate against millions of law-abiding American citizens. https://t.co/4femVtBCH6

On another note, Cuomo was asked during the press conference about the investigation with employees from NY AG Letitia James’ office. Cuomo said only that he would cooperate “at the appropriate time”.

We imagine we’ll be hearing more about that shortly (unless James’ and Cuomo’s Democratic peers have decided to spare him now that the intense public scrutiny has faded).