While Dr.Seuss is now demoted to “offensive material”, eBay, in all its virtue-signaling wisdom, appears to have no problem with Mein Kampf… 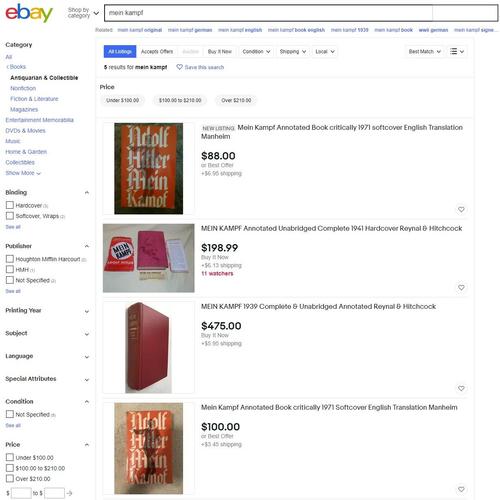 You really can’t make this shit up!

As Summit News’ Paul Joseph Watson noted earlier, Digital Fahrenheit 451 now a reality. The purge of Dr. Seuss books continues after it was revealed that eBay has banned sales of the books, labeling them “offensive material.”

Adam Townsend posted a screenshot from an eBay listing showing that sales of the books have been suspended because they violate the company’s “Offensive Materials” policy.

“Listings that promote or glorify hatred, violence, or discrimination aren’t allowed,” the message said, adding, “As a courtesy, we have ended your item and refunded your selling fees, and as long as you do not relist the item, there will be no negative impact to your account.”

Look at this from eBay pic.twitter.com/rqoIoeQ8bi

The controversy surrounding the books began last week when a far-left group called Learning for Justice claimed that the books, which were written by progressive liberal author Theodor Seuss Geisel, contained “orientalism, anti-blackness, and white supremacy,” according to a study.

The study asserted, “Of the 2,240 (identified) human characters, there are 45 of color representing two percent of the total number of human characters. Of the 45 characters of color, 43 “exhibited behaviors and appearances that align with harmful and stereotypical Orientalist tropes.”

This prompted Dr. Seuss Enterprises to announce it would cease publishing six of the author’s books because they “portray people in ways that are hurtful and wrong.”

Despite this, sales for one of the books on Amazon surged by a staggering 5.7 million percent, meaning the company was basically rewarded for caving in to the woke mob.

“If outdated political ideas are now banned, the list of books eBay refuses to list will be miles long,” writes Cassandra Fairbanks.

Meanwhile, Fahrenheit 451 moves closer to being a reality with each passing day.