Last week, after British online newspaper The Independent published a scathing op-ed piece about comedian Russell Brand, Elon Musk took to Twitter to defend the standup comedian and offer his thoughts on the mainstream media.

The exchange started when The Independent took a swipe at Brand, who has been gaining popularity online, namely for avoiding groupthink while discussing current events and politics.

Responding to a Tweet that claimed Brand had turned into a conspiracy theorist, Musk responded: “With so many mainstream media companies saying [Brand] is crazy/dangerous, I watched some of his videos. Ironically, he seemed more balanced & insightful than those condemning him!” 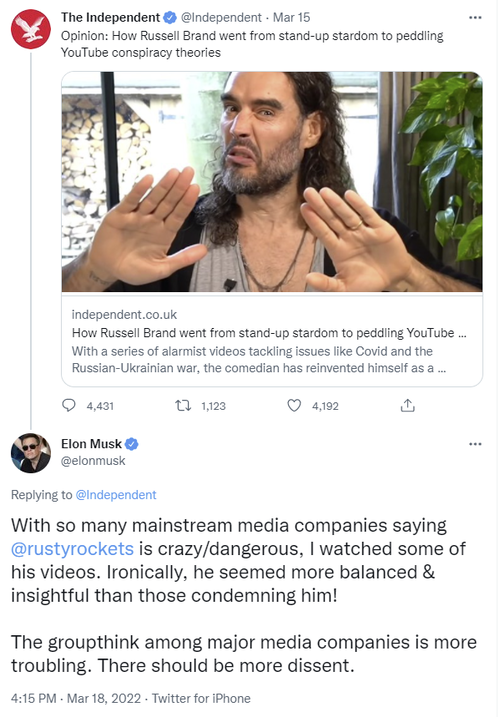 After sticking up for Brand, Musk then turned his ire toward the mainstream media: “The groupthink among major media companies is more troubling. There should be more dissent” the Tesla CEO wrote.

The Independent’s piece was titled “How did Russell Brand go from stand-up stardom to peddling YouTube conspiracy theories?” and it focused on the online resurgence of Brand, who has tackled topics like Covid and the Russian-Ukrainian war by daring to think for himself and now carrying the mainstream media’s narrative.

“Brand has reinvented himself as an outspoken YouTube personality, amassing over 5 million followers,” the article read. “Maybe he truly wants to awaken his followers to the world’s ugly realities. Maybe he just likes the attention. Or maybe a sceptical viewer might watch one of his videos and question why he advertises his stand-up tour just seconds into the start of each clip.”