An Italian study tracking discharged coronavirus patients revealed that nearly 90% of 143 people tracked still have symptoms two months after falling ill, according to the Daily Mail.

Almost half reported a worsened quality of life compared to before they were struck with the virus. Experts described the results as ‘extremely worrying’.

It follows a study this week which suggested almost 10 per cent of patients who lose their sense of taste or smell during Covid-19 don’t get it back within a month. –Daily Mail

The most common symptoms among those surveyed were shortness of breath, joint pain, chest pain, coughing and loss of smell. 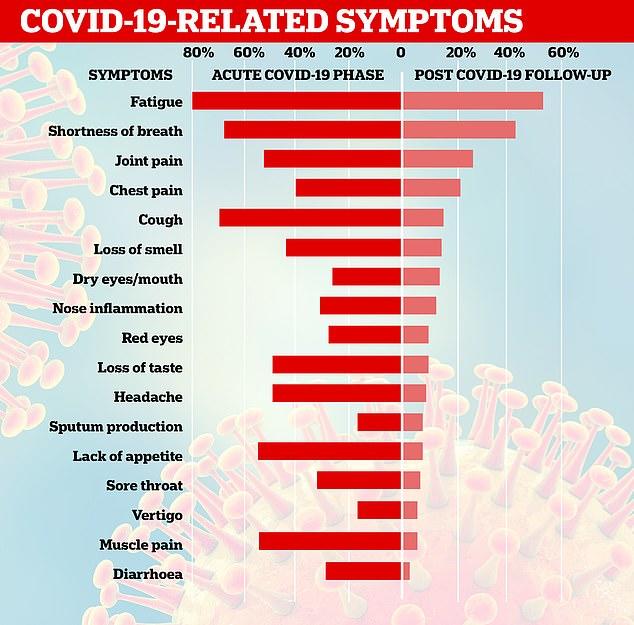 Keep in mind that these are people who were sick enough to require hospitalization, while most people who contract coronavirus do not.

The study revealed that just 12.6% of discharged patients were completely free of COVID-19 symptoms, while 32% had one or two symptoms and 55% had more than two.

Patients who continue to exhibit symptoms are often referred to as “long haulers,” and have taken to internet forums to describe their frustrating ‘waves’ of COVID-19 symptoms that just won’t go away months later.

The study was led by Dr. Angelo Carfi of the Fondazione Policlinico Universitario Agostino Gemelli IRCCS hospital in Rome, who surveyed patients on the two month anniversary of when they reported feeling ill. The patients had been out of the hospital an average of 36 days, with an average time in the hospital of 14 days.

According to Epidemiologist Gideon Meyerowitz-Katz of New South Wales, Australia, the findings are “extremely worrying,” though noted on Twitter that many of these symptoms are typical for those recovering from pneumonia – which coronavirus causes in many of those who display symptoms form the disease.

If their score dropped by 10 points it was described as ‘worsened quality of life’ – which was seen in 44.1 per cent of patients.

The researchers noted that their study can’t rule out the symptoms experienced by people post-Covid were not typical for them beforehand.

They also couldn’t decipher if those who had worse symptoms when they were ill were more likely to have persistent ones afterwards.

Dr Bharat Pankhania, a senior clinical lecturer at the University of Exeter, said the results of the study are ‘inconclusive’ due to the small size.

However, he agreed with the study’s authors that ‘there may be a Covid-19 disease syndrome and that we must follow it up’, The Telegraph reports.

It follows a study which suggested one in ten people who lose their sense of taste and smell with the coronavirus may not get it back within a month.

A change in smell or taste is now recognised as a tell-tale sign of Covid-19, alongside a continuous cough and fever. –Daily Mail

You can read about people’s experiences with COVID-19, including many ‘long haulers,’ here.