“As the Nazis worked to consolidate their power and build a cohesive “national community,” suppression of dissent played a key role. In 1933, the Nazis issued a decree that required Germans to turn in anyone who spoke against the party, its leaders, or the government…” –Facing History

The FBI issued an ominous tweet on Sunday which encourages “family members and peers” to “learn how to spot suspicious behaviors and report them to the FBI” in the name of national security.

The broadly-worded tweet from the same agency that confiscated an unassembled Lego model of the US Capitol as evidence against a Jan. 6 protester – suggests that family members are “often best positioned to witness signs of mobilization to violence.” For example, your radicalized Antifa nephew is being encouraged tell the FBI that you might be a domestic terror threat because you own guns and told the family at Thanksgiving you don’t like illegal immigration.

Family members and peers are often best positioned to witness signs of mobilization to violence. Help prevent homegrown violent extremism. Visit https://t.co/bql36iSbig to learn how to spot suspicious behaviors and report them to the #FBI. #NatSec pic.twitter.com/ZwJp5h5bWD

The FBI’s tweet goes hand-in-hand with a campaign dating back to at least September of 2020, when FBI Director Chris Wray told Congress that the greatest threat facing America comes from domestic extremists (and not the thousands of ‘protesters’ who spent much of last year looting, murdering and setting fires across American cities), which quickly morphed into ‘angry white men’ who disagree with Democratic policies.

The #FBI cares more about impeaching trump and finding legos in Republicans homes rather than investigating the Las Vegas shooting https://t.co/s1EyFIf5tA

Combine that with President Biden framing the Capitol rioters as ‘white supremacists,’ which he said is ‘he most lethal terrorist threat to our homeland today’, and Gen. Mark Milley, the highest-ranking military officer in the U.S. as Chairman of the Joint Chiefs of Staff, testifying last month that he wants to understand where ‘white rage’ comes from, and it couldn’t be more clear that this is a coordinated propaganda campaign to demonize an entire race to solve a problem that largely doesn’t exist, while actual domestic terrorism is excused as ‘mostly peaceful’ protests.

The American Stasi is urging people to report their family members for thoughtcrime. https://t.co/WvzRmJeBAk

Know the signs. See something, say something pic.twitter.com/NV1AnOGLfX

The #FBI cares more about impeaching trump and finding legos in Republicans homes rather than investigating the Las Vegas shooting https://t.co/s1EyFIf5tA

Chicago’s 400 homicides year-to-date (black rage?) apparently don’t register on the radar, but if your indoctrinated leftist family member thinks you’re on the path to ‘extremism’, you may receive a knock on the door. 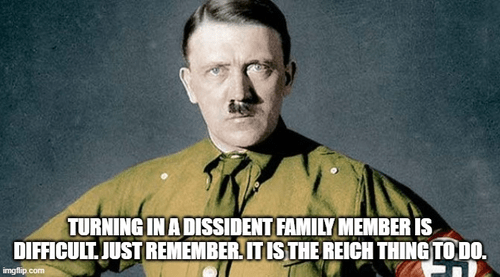