Hours after the House passed a bill allowing for unlimited delays for FBI background checks, and Senate Majority Leader Chuck Schumer revived a House-passed bill requiring background checks for private firearms sales, Sen. Dianne Feinstein (D-CA) announced that she would soon ‘work with her Senate colleagues’ to pass other reforms – including an assault weapons ban – in the coming weeks.

I look forward to working with my colleagues to pass this bill and other reforms, including the assault weapons ban I will reintroduce in the coming weeks. With a new administration in the White House, it’s time to take action to end gun violence. pic.twitter.com/SRSJ7BSDs0

It’s unclear which features on scary black rifles that are functionally equivalent to any hunting rifle will be off-limits.

“Universal background checks are a commonsense approach to address the gun violence epidemic plaguing our country. I’m proud to support the Background Check Expansion Act and look forward to passing it and other much-needed reforms.

“This bill would require background checks on all gun sales and transfers, including for private and unlicensed sales for which they are not currently required. This is one of the best ways to ensure guns won’t fall into the hands of dangerous people.

“*I look forward to working with my Senate colleagues to pass this bill and other reforms, including the assault weapons ban that I plan to introduce in the coming weeks*. Commonsense bills to combat gun violence have been introduced in the House and with a new administration in the White House, it’s time to take action to end gun violence.”

“No more hopes and prayers, thoughts and prayers—a vote is what we need,” said Schumer, vowing to bring a bill, H.R. 8, out of former Majority Leader Mitch McConnell’s ‘legislative graveyard’ after it stalled in the Senate in early 2019 after passing through the Democrat-controlled House of Representatives.

Currently, any gun purchased at a retail store, or online, must go through a background check and involved a licensed firearms dealer (FFL). H.R.8 requires background checks for private sales.

“The idea that this is going to make us safer is laughable,” said Rep. Mary Miller (R-IL). “Criminals looking to get their hands on firearms to use in crimes are not going to submit to background checks. Only law-abiding citizens will follow the law. This is a back door means of setting up a national registry of firearms – something I completely oppose.”

“The problem with gun violence is not that we don’t have enough gun laws,” Miller continued. “We have enough gun laws. What we need is to make sure the laws we have are enforced. Look at what happened in 2019 in Aurora when five people were shot and killed. The shooter had moved to Illinois from another state and because his background information was not updated – he was allowed to get a FOID card in Illinois and purchase firearms. Then when he applied for a conceal carry permit, his criminal background was discovered and his FOID card was revoked but his guns were never surrendered as required by law. If the gun laws had been enforced – a terrible tragedy could have been avoided. We need better enforcement – not more laws. Instead of passing terrible legislation like H.R. 8, we need to do a better job of providing law enforcement agencies with the resources they need to enforce existing gun laws.”

According to a summary of the bill, its goal is to “utilize the current background checks process in the United States to ensure individuals prohibited from gun possession are not able to obtain firearms.”

I introduced #HR8, my bill to help keep our communities safe from gun violence. This bill expands background checks to be universal, the fastest and most effective way to save lives. Watch my message on the Bipartisan Background Checks Act here: pic.twitter.com/GEwXhc5vCQ

Meanwhile, the House just passed H.R. 1446, which would allow for indefinite delays for FBI background checks, as opposed to the three-day default transfer window. Introduced by Democratic Rep. Jim Clyburn (SC), the Enhanced Background Checks Act of 2021 would close down the so-called “Charleston Loophole” which allowed some gun sales to go through before the required background check is complete.

Of note, there’s been a 22.8% increase in FBI background checks y/y. 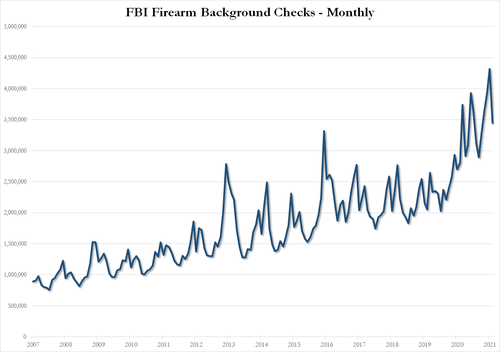