How is it that California enacted draconian COVID lockdown measures, yet had nearly identical results to Florida – a state which went out of its way to avoid shackling residents with small business-killing prohibitions and mentally unhealthy isolation?

Not only that, both states followed roughly the same trajectories for various COVID-19 metrics – with Florida looking better by virtually every measure when adjusted for population, and California looking like Orwellian overlords save for multiple judges which have tossed Newsom’s edicts because the state failed to provide a scientific basis for their decisions – and has concealed their ‘methodology’ that has driven business-killing decisions. 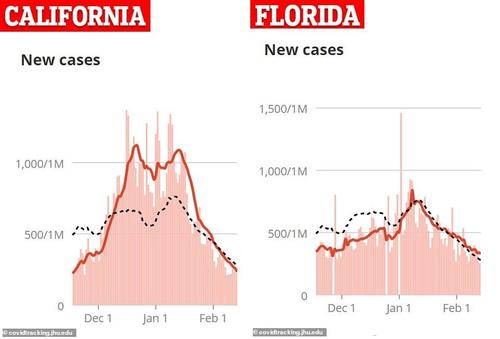 All illustrations via the Daily Mail 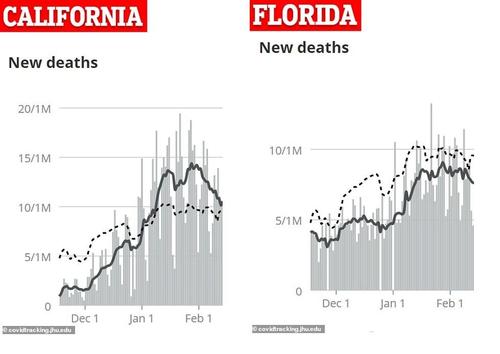 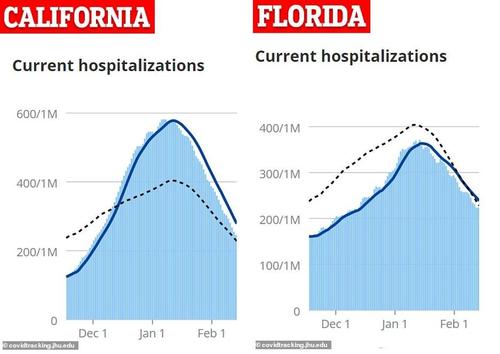 “So were lockdowns necessary and did they work? The answer is a complicated one, but researchers say that they were beneficial in the early months due to our lack of knowledge about how COVID-19 spread and how to treat it.

Studies have shown that stay-at-home orders and restrictions saved numerous lives, but that they might be less useful now as more of the population gains natural immunity through infection or immunity via vaccination – but that social distancing and masks are still necessary to continue driving down case and death rates.” – Daily Mail

Florida notably did not shut down schools, nor impose statewide mask mandates. As the Mail notes, however, the Sunshine State had historically higher COVID-19 rates until recently. 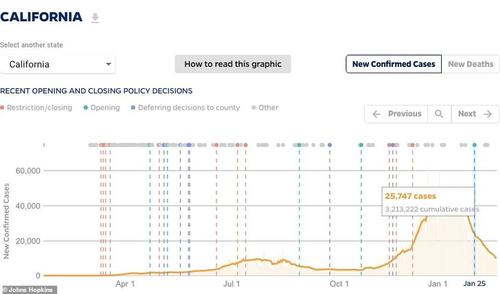 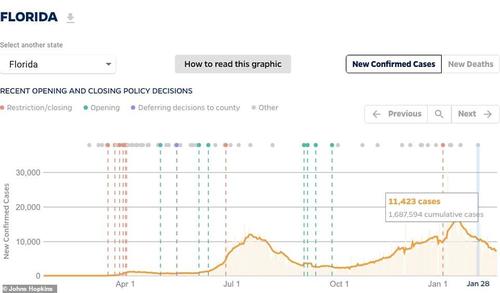 “For example, in late July, Florida was reporting about 44 hospitalizations per 100,000 while California had about 22 per 100,000 before peaking again in late December and early January.

Worth noting when it comes to hospitalizations is age.

More than one-fifth, or 21 percent, of Florida’s population is at least 65 years old with at least 4.6 million out of the state’s 22 million identifying as senior citizens.

Comparatively, just 15 percent of California’s population is elderly with six million out of 40 million aged 65 and up.

This means more residents in Florida are susceptible to a virus that preys on the elderly.” – Daily Mail

Totally true, except for the fact that FL has the second-oldest population in America and CA has the fifth-youngest, FL's unemployment rate is 6.1 percent and CA's is 9.0, and FL is free and wonderful, and CA has become an authoritarian hellhole pic.twitter.com/bTCLO0OGZs

On Sunday, DeSantis told Fox News Business that he focused on “lifting people up” during the pandmic, vs. lockdown states which are “putting people out of business.”

“There’s a whole bunch of things we’ve been doing for COVID, but at the same time, we’ve lifted our state up, we’ve saved our economy and I think we’re going to be first out of gate once we are able to put COVID behind the country,” he told host Maria Bartiromo.

Which is the greatest state in the union right now?
Has to be #Florida…#DeSantis: "Biden is a lockdowdower, his advisors are lockdowners. Lockdowns don't work." pic.twitter.com/ASnQP2LdxI

Perhaps Governor Newsom and his crisis management team can discuss damage control over a nice indoor dinner at the French Laundry.