Update (1125ET): France and Italy (once again) are the latest EU heavyweights to halt the use of the AstraZeneca-Oxford COVID jab, following in the footsteps of Germany and a dozen other nations.

Like the Netherlands and Ireland, Germany’s health ministry said the decision to suspend vaccinations was a “precaution.”

Just last week, the mainstream media was dismissing the suspensions as another example of endemic and irrational anti-vax sentiment in Europe, which has been blamed for the slow vaccine rollout on the continent.

But who could have seen this coming?

After saying earlier that there is no evidence the jabs increase the risk of deadly blood clots, Germany’s PEI said Monday that the accumulation of a very rare form of blood clots in patients is being seen in patients with low blood platelet counts and/or those who bleed after vaccination.

Facebook "factcheckers": will you allow the terrorists at the PEI to spread malicious facts

Of course, Twitter is still advertising a story claiming no link found between the vaccine and blood clots. Somebody call the factcheckers.

In other news, Reuters reported that a batch of the vaccines containing some 393.6K shots has been seized by Italian prosecutors.

Update (1045ET): Despite insistence from AstraZeneca, the WHO and other entities that the AstraZeneca jab is safe and that there’s no evidence linking vaccines to dangerous blood clots observed in dozens of patients, Germany has just joined the growing list of countries that have suspended vaccinations using the AZ jab.

As Europe’s biggest economy, Germany’s decision carries outsize weight. This isn’t the first time Berlin has embraced a cautious approach to vaccines. It initially only approved the AZ jab for use on people under the age of 65, which angered critics who claimed the country was denying jabs to the population that is most vulnerable to vaccinations.

Meanwhile, the UK continues to mock EU nations for their cautious approach.

EU: but how do we know the AstraZeneca jab is safe???

Germany’s decision to suspend followed advice from its national regulator, which said the jabs should be suspended out of an abundance of caution – language used by other EU governments to justify the decision.

Like the Netherlands and Ireland, Germany said the suspension was a

Given the overwhelming wave of criticism from the WHO, Brussels and the UK, which have lambasted governments that suspended the jab for feeding into fears about vaccines, we’re surprised Twitter and Facebook haven’t censored reports about the suspensions already. More than a dozen countries have now suspended the jab, though Thailand has reinstated it Monday.

Despite the best efforts of Brussels and AstraZeneca to convince Europeans that there is no heightened risk of deadly blood clots associate with the COVID vaccine developed by AstraZeneca and Oxford, more countries have banned the jabs, adding another massive obstacle to Europe’s already faltering vaccination effort.

Even as regulators from Europe to Asia insist that they have found no fault with the AZ jabs, the Netherlands has announced plans to join a growing list of about a dozen places, including northern Italy, Ireland and Thailand, moving to suspend the shot over concerns about possible side effects from two batches.

About a dozen countries have banned the jabs, although Thailand allowed AZ jabs to proceed on Monday, four days after halting them. Prime Minister Prayuth Chan-Ocha and some of his cabinet members will be receiving it on Tuesday after a medical panel said there was no sign the vaccine contributed to blood clots.

AstraZeneca said a “careful” review of all available data of the more than 17MM people in the EU and the UK that have received the AZ jab showed no evidence of an increased risk of pulmonary embolism, deep vein thrombosis or thrombocytopenia. Yet, more reports of deadly blood clots in post-vaccine patients have emerged. Marco Cavaleri, European Medicines Agency’s chair of the vaccine evaluation team, insisted in an interview with France24 on Monday, that there is no causal link right now between AstraZeneca shots and deaths. The WHO has called the jab “excellent”, and insisted there is no reason to delay inoculations.

AstraZeneca’s Chief Medical Officer Ann Taylor said the number of events are lower than what would be expected to occur naturally in a general population of that size. In studies, participants getting the vaccine had fewer clots than those given placebo. Others warned that the world can’t halt vaccination campaigns every time somebody who receives the vaccine gets sick.

More deaths have been potentially linked to the vaccine, as Denmark’s Medicines Agency said a 60-year-old woman died after receiving the AstraZeneca shot, suffering from an “unusual” combination of symptoms that raised suspicions.

For the bureaucrat-kings in Brussels, questions about the AstraZeneca vaccine’s safety is only the latest problem with the vaccination rollout. Production of the vaccine has been slower than expected. One plant in the Netherlands is still awaiting regulatory approval to deploy doses.

The site, owned by the manufacturer Halix, is making the vaccine drug substance for Astra, and forms part of both the EU and UK supply chains, Bloomberg reported.

These issues mean Astra will only be able to deliver about 100MM doses to the EU in the first half of the year, only 1/3rd the number originally touted by Brussels. 30MM doses are due to be delivered by the end of this quarter, with the rest coming in the next three months. 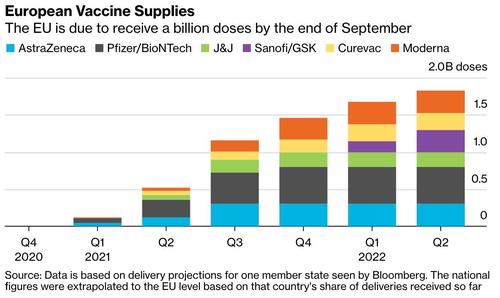 The suspensions may further embed negative views, despite the guidance from the European Medicines Agency. The EMA guidance wasn’t enough to convince Ireland to continue with the vaccine and its Health Minister on Sunday recommended temporarily halting the shot.

The reputational damage has been done. A high number of Europeans are saying they would prefer an alternative. 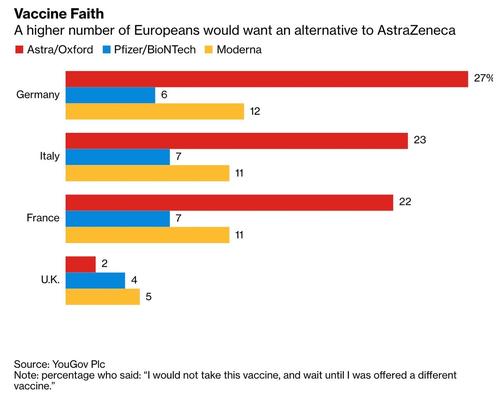 After the Italian government barred vaccinations from a batch of AstraZeneca jabs late last week, officials from the northern region of Piedmont said on Sunday it would stop using a batch of AstraZeneca coronavirus shots after a teacher died following his vaccination on Saturday. Italian newspapers reported it was batch ABV5811 and a source close to the regional government confirmed it.

“It is an act of extreme prudence, while we verify whether there is a connection. There have been no critical issues with the administration of vaccines to date,” said Luigi Genesio Icardi, head of regional health services, said in the statement.

The region, around the northern city of Turin, had initially suspended all AstraZeneca vaccines in order to identify and isolate the batch from which the jab administered to the teacher, from the town of Biella, came. The decision, following similar moves elsewhere in Europe, was precautionary and the region is awaiting the results of checks which will verify whether there is a connection between the death and the vaccination.

AstraZeneca’s “European nightmare”, as Bloomberg called it, comes as fears about spreading COVID variants intensify. Dr. Fauci warned about it over the weekend, and Dr. Scott Gottlieb dedicated his morning update on CNBC to the B117 variant and its conquest of NYC.

"Now I think the tables have turned where I think we are ahead of Europe," says @ScottGottliebMD. "We have much more immunity in our population both prior infection– but also now from vaccinations." pic.twitter.com/YfhXOBSdyj

Meanwhile, Denmark’s Medicines Agency says a 60-year-old woman who died after receiving an AstraZeneca vaccine shot against Covid suffered from an “unusual” combination of symptoms as the number of suspicious deaths suspected of links to the jab is nearly a dozen. That comes after the most alarming report over the weekend: Three health workers in Norway who had recently received thevaccine were being treated in hospital for bleeding, blood clots and a low count of blood platelets, Norwegian health authorities said on Saturday.

The woman had a low blood platelet count, blood clots in large and small vessels as well as bleeding, according to sources cited in Bloomberg’s report. These symptoms are “highly unusual” and are being thoroughly investigated by the EMA.

While Thailand’s decision to restart vaccinations is certainly a welcome sign, it doesn’t change the fact that the UK’s AstraZeneca jab – what was supposed to be the European champion – is now facing such intense resistance and doubt means the EU will almost certainly continue to lag behind the US and Briton.

Pretty soon, Brussels might be forced to finally acknowledge that Russia built a more effective, and more reliable jab by approving “Sputnik V” for use in the EU as a growing number of countries (most recently, Italy) move to unilaterally accept the jabs.