German Chancellor Olaf Scholz has issued an order to halt the process of certifying the Nord Stream 2 gas pipeline. Well. Welcome to the brave new world where Europeans are very soon going to pay €2.000 for 1.000 cubic meters of natural gas!

German Chancellor Olaf Scholz has issued an order to halt the process of certifying the Nord Stream 2 gas pipeline. Well. Welcome to the brave new world where Europeans are very soon going to pay €2.000 for 1.000 cubic meters of natural gas!

Based on Medvedev’s tweet, translating MWh to cubic meters, it appears gas prices for Europe could be headed back to crisis levels not seen since late 2021. 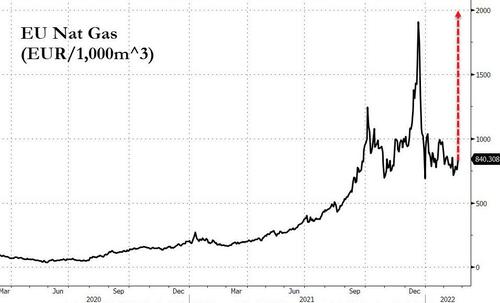 Europe is heavily reliant on Russia for its gas needs, and to block the Nord Stream 2’s certification will only create havoc in European energy markets. 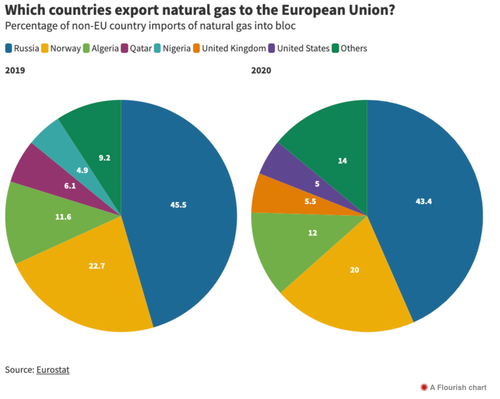 Europe’s ultra-low gas storage levels for this time of year will keep the market very tight even beyond the winter season.

At a moment the United States and Europe are busy mulling over what sanctions to impose on Moscow for Putin’s independence recognition for Ukraine’s separatist republics – on the one hand wanting Russia to feel the pain as a warning against moving further into Ukraine (beyond what the Kremlin is dubbing “peacekeeping” troops in Donetsk and Luhansk, which entered the republics overnight), and on the other wanting to avoid severe enough economic measures that would almost guarantee immediate escalation – Germany on Tuesday has announced it has halted the certification process for the Nord Stream 2 pipeline.

As European Union leaders prepare to sanction Moscow, Bloomberg quoted German Chancellor Olaf Scholz as saying the Nord Stream 2 pipeline certification can’t happen right now. He explained to reporters that he contacted the Economic Ministry to withdraw a report on the security of supply required for the certification process of pipeline to move forward. Without it, NS2 “cannot go into operation” – he told reporters. 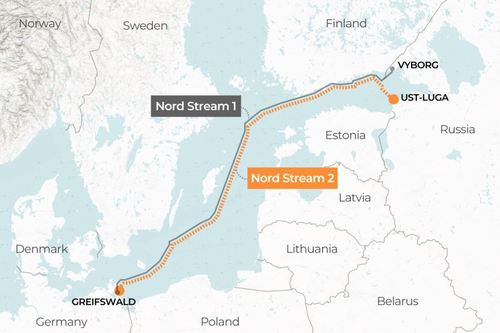 In essence as Bloomberg put it, the controversial Russia-to-Germany natural gas pipeline appears to be the first major Russian project to fall victim to Putin’s independence declaration for the breakaway Ukraine republics.

“That sounds technical, but it’s the necessary administrative step so that no certification of the pipeline can happen right now,” Scholz said of the move, adding that “without the certification, Nord Stream 2 cannot go into operation.”

Concerning the first wave of sanctions reportedly now being prepared targeting Russia, Scholz said, “I expect a very strong and focused package.” What’s expected to be in the package has been revealed and summarized as follows by Bloomberg:

European natural gas jumped 13% today – hours after Russian troops began entering Donetsk and Luhansk. Brent prices nearing $100 a barrel, and German power and coal prices advanced. This all comes as Europe is dealing with one of the worst energy crisis in years.

That's a huge step after refusing to be drawn on it in public for months. It'll have major consequences for European energy security and suggests the western sanctions against Moscow will be tough. https://t.co/hQknCtBEpG

The Russia-to-Germany gas pipeline was completed on Sept. 11 and has been ready to supply Europe for months. Even before this week’s geopolitical turmoil in Ukraine, Germany’s federal network agency, Bundesnetzagentur, halted the pipeline’s certification process in mid-November.

By December, Bundesnetzagentur President Jochen Homann said, “a decision won’t be made in the first half of 2022.” The latest developments to halt the certification process suggest Nord Stream 2 pipeline won’t supply energy crisis-stricken Europe with natural gas anytime soon.

Likely this first wave is only the very beginning of multiple waves of sanctions to come; however, hawks are already decrying these as too softened and easy for Moscow to endure…

????Boris Johnson: we are preparing ourselves for a prolonged crisis over Ukraine.