After a one-two punch of disappointing news for Gilead out of China, where as we reported yesterday a trial of remdesivir in Covid-19 patients with mild or moderate symptoms was suspended as no eligible patients could be recruited according to an update on ClinicalTrials.gov, which in turn followed a trial of the drug in severely ill Covid-19 patients which was also terminated for similar reasons, it felt like one or more hedge funds would seek to manipulate public sentiment – and the market – and get out of an underwater position.

They did just that at 430pm today when the low profile Statnews published a report by Adam Feuerstein, best known for doing the bidding of one or more hedge fund clients, according to which a “Chicago hospital treating severe Covid-19 patients with Gilead Sciences’ antiviral medicine remdesivir in a closely watched clinical trial is seeing rapid recoveries in fever and respiratory symptoms, with nearly all patients discharged in less than a week, STAT has learned.”

“Learned” from whom? A hedge fund or two who were long GILD and needed a fake news catalyst to get out? Because last time we checked, double blind, secret drug trials are, er… secret.

The report went on: “patients using Gilead’s remdesivir were “seeing rapid recoveries in fever and respiratory symptoms”, which is odd considering the two previous incomplete/failed trials in China. According to the report, “almost all patients were discharged in under than a week, and only two patients died.”

Which actually is very bad news because as the FT reported later – this time using facts not sources – “none of the patients on the Chicago trial had been on invasive ventilation“, so is it possible that the drug killed them? Maybe Feuerstein can ask his hedge fund source.

In any case, at the time the data hit Bloomberg around 4:21pm, it barely registered among the institutional audience, or even the algos, as most serious players were well aware of Feuerstein’s “tactical” reputation.

It wasn’t until the news was reported by CNBC about 30 minutes later – and hit the retail investing audience – that GILD stock soared 16 and the entire market took off as if someone had suddenly discovered not only a cure but also a vaccine for coronavirus.

Alas, neither happened, and as it has done on numerous occasions previously, about three hours after the news broke conveniently providing one or more hedge funds ample opportunity to offload their position in the thin after hours market, Gilead issued a statement which suggested that STAT was pumping the stock based on nothing more than “anecdotal reports” to wit:

“We understand the urgent need for a Covid-19 treatment and the resulting interest in data on our investigational antiviral drug remdesivir. The totality of the data need to be analysed in order to draw any conclusions from the trial.”

“Anecdotal reports, while encouraging, do not provide the statistical power necessary to determine the safety and efficacy profile of remdesivir as a treatment for Covid-19. We expect the data from our Phase 3 study in patients with severe Covid-19 infection to be available at the end of this month, and additional data from other studies to become available in May.”

And so, one more attempt to ramp the market using fake news of an imminent drug has failed, with some observing that a Phase 1 drug trial is now the functional equivalent of a Phase 1 trade deal – both meaningless on their own, but with the power to send stocks surging when used tactically by unknown players.

Experts had high hopes for remdesivir because it had shown it was effective in stopping the Ebola virus replicating. Ebola shares a similar mechanism of replication with Sars-CoV-2, the virus that causes the Covid-19 disease. However, there has been no definitive statistic evidence yet that that is the case.

As a result, the drug has not been approved to treat any disease and scientists are waiting for the results of large trials with control arms for proof that it works and that the benefits outweigh any risks of side-effects. Umer Raffat, a biotech analyst at Evercore, said that he was “cautiously optimistic” about remdesivir but warned it was not a “silver bullet”.

He said it was important to note that none of the patients on the Chicago trial had been on invasive ventilation, which tends to be an indication of a more serious condition and worse outcomes. In short, the observed response could have been nothing more than a placebo effect.

And while stocks soared to new one month highs on the initial overhyped news of a trial that has not yet even concluded amid the latest powerful short squeeze, the rally has since reversed even if the drop has a long way to go before it fills the gap. Meanwhile, stocks are now the most overvalued ever, ever on the basis of forward multiples. 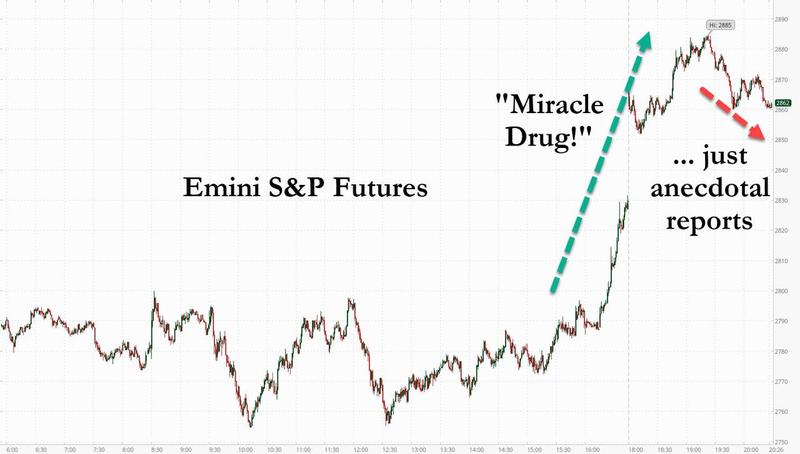 In short, we just observed another marketwide pump and dump, in which whales used gullible, CNBC-watching Joe Sixpack retail investors for “distribution”