Half of the Pandemic’s Unemployment Money May Have Been Stolen: Axios

As much as half of the unemployment benefits paid by the US government over the past year may have been stolen through fraud, with the bulk ultimately ending up outside the country – likely into the hands of foreign crime syndicates in China, Nigeria, Russia and elsewhere, according to Axios‘ Felix Salmon.

According to some estimates, unemployment fraud during the pandemic could ‘easily reach $400 billion,’ as states weren’t prepared for the unprecedented wave of unemployment claims. 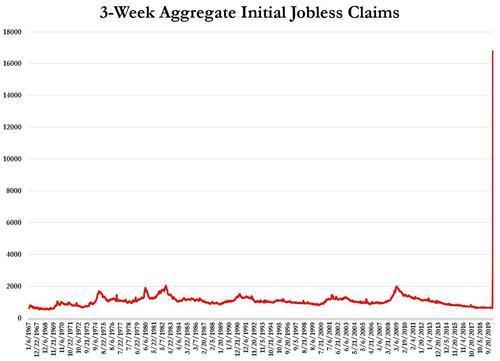 States knew that fraud was inevitable, but opted to rush money out to people with minimal oversight, as opposed to laboriously vetting each application.

According to Blake Hall, CEO of ID.me – a fraud prevention service, America has lost over $400 billion to fraudulent claims, with as much as 50% of all unemployment payments possibly being stolen.

Of that, up to 70% of the money stolen by impostors ultimately left the country according to Haywood Talcove, CEO of LexisNexis Risk Solutions, who ways “These groups are definitely backed by the state.”

The rest of the money was likely stolen by street gangs domestically, who have made up a greater share of the fraud in recent months.

The big picture: Before the pandemic, unemployment claims were relatively rare, and generally lasted for such short amounts of time that international criminal syndicates didn’t view them as a lucrative target. -Axios

What’s more, unemployment fraud can now be obtained on the dark web on a software-as-a-service (SAAS) basis – similar to ransomware. Naturally, states without fraud-detection services in place are the top targets, however several states are beginning to employ more sophisticated measures to prevent fraud.

As Axios’ Salmon notes, however, “It’s far too late.”