The dumbing down of America was explained in the 2006 movie Idiocracy, where Private Joe Bauers (played by Luke Wilson), is the definition of an “average American,” takes part in a top-secret hibernation program via the Pentagon, wakes up five centuries later to only discovery just how dumb society has become.

Bauers wakes up in the year 2500, and he’s immediately declared the smartest person in the world. Here’s a snippet from the film:

A new study suggests this is possible through today’s eating trends in western countries that could severely impair brain functions.

Researchers discovered that volunteers in the study performed with high cognitive processes when they did not consume high fat and high added sugar diets, commonly found in many western-style meals.

Richard Stevenson, professor of Psychology at Macquarie University in Sydney and one of the co-authors of the study, said eating a western-style diet causes some disruption in the hippocampus region of the brain, the part involving memory and appetite control.

“After a week on a western-style diet, palatable food such as snacks and chocolate becomes more desirable when you are full,” Stevenson told The Guardian. “This will make it harder to resist, leading you to eat more, which in turn generates more damage to the hippocampus and a vicious cycle of overeating.

On a long enough timeline, impairments caused by western-style diets could lead to the long-term decline of brain function in America’s future generations. Here are 18 statistics that prove America has become an “Idiocracy”…

#1 One recent survey found that 74 percent of Americans don’t even know how many amendments are in the Bill of Rights.

#2 An earlier survey discovered that 37 percent of Americans cannot name a single right protected by the First Amendment.

#3 Shockingly, only 26 percent of Americans can name all three branches of government.

#4 During the 2016 election, more than 40 percent of Americans did not know who was running for vice-president from either of the major parties.

#5 North Carolina is considering passing a law which would “mean only scores lower than 39 percent would qualify for an F grade” in North Carolina public schools.

#6 30 years ago, the United States awarded more high school diplomas than anyone in the world.  Today, we have fallen to 36th place.

#7 According to the Pentagon, 71 percent of our young adults are ineligible to serve in the U.S. military because they are either too dumb, too fat or have a criminal background.

#8 For the very first time, Americans are more likely to die from an opioid overdose than they are in a car accident.

#9 One study discovered that one-third of all American teenagers haven’t read a single book in the past year.

#10 A recent survey found that 45 percent of U.S. teenagers are online “almost constantly”.

#13 In more than half of all U.S. states, the highest paid public employee in the state is a football coach.

#14 During one seven day period last summer, a total of 16,000 official complaints about human feces were submitted to the city of San Francisco.  And apparently the problem is very real because one investigation found 300 piles of human feces on the streets of downtown San Francisco.

#15 Every 24 hours, more than a third of all Americans eat fast food.

#16 Less than half of all Americans know which country used atomic bombs at the end of World War II.

#18 Today, the average college freshman in the United States reads at a 7th grade level.

We’ve outlined that it’s not just dieting that has played a major role in dumbing down America or in other western countries, but also the proliferation of smartphones and other devices, which have worn away the ability to focus. Combine less-nutritious food and technology, and it’s producing an “Idiocracy” apocalypse of stupid people.

Norwegian researchers in 2018 analyzed the IQ scores of people from western countries between 1962 and 1991 and discovered scores increased by almost 3 percentage points each decade for those born between 1962 to 1975 – but then, in nearly the same year the term “junk food” was popularized in 1976, IQ scores started to plunge.

Junk food has plagued many western countries for the last four decades, suggesting a cognition crisis has developed as society becomes stupider by the day. And if it’s by design or just an accident, that remains an open discussion among the tinfoil hat community.

One thing remains certain: As the West becomes dumber, the East is rising. 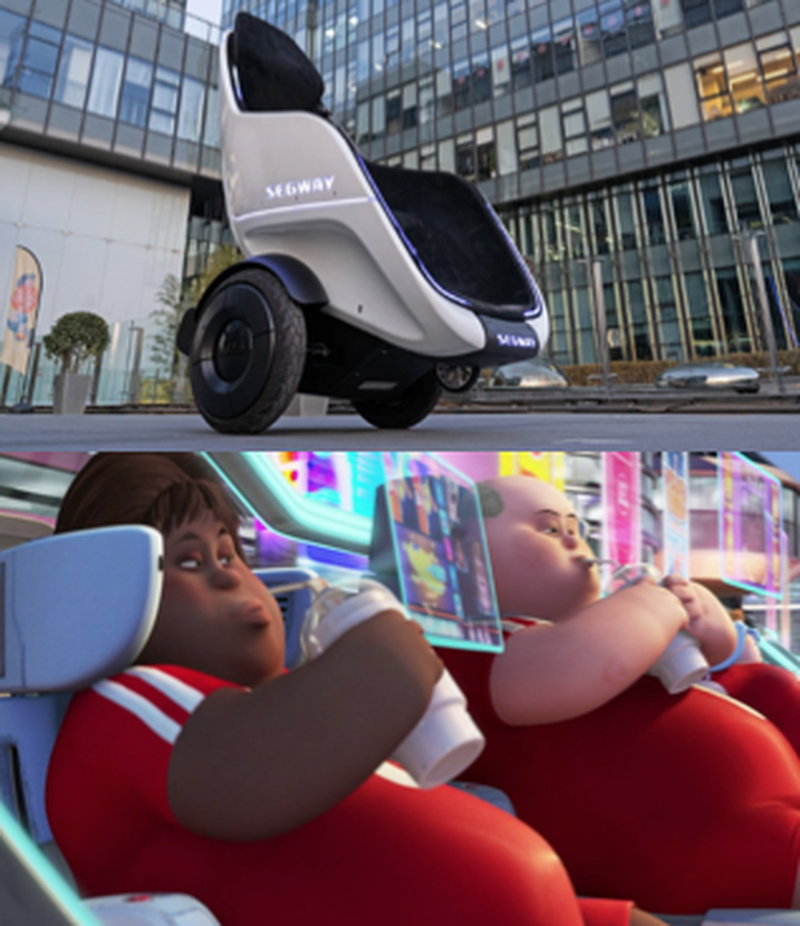 Before you know it, the East will be producing self-driving Segway chairs for fat stupid Americans.