As Bitcoin Magazine’s Casey Carillo writes, “there’s seemingly few people who arouse such polarized responses in the Bitcoin community as Peter Thiel. Love him or hate him, he’s an exceptionally influential individual in modern finance and tech, and when it was announced that he would be speaking at Bitcoin 2022 in Miami, many were curious what he would say.”

Previously, Thiel – who was the highlight of the Miami Bitcoin summit along with Michael Saylor and Cathy Wood, has said “You’re supposed to just buy Bitcoin,” and “I feel like I’ve been underinvested in it.” He even went as far as to say, “Bitcoin at $66,000. Is it going to go up? Maybe … But it surely tells us that we are at a complete bankruptcy moment for the central banks.”

This of course is what Bitcoiners have been shouting from the rooftops for years — the price action, in the short term does not matter (and indeed it went down after that quote), but regardless, the decentralized currency’s rise is testament to falling trust in the monetary status quo, especially now that as part of the Bretton Woods 3 world, the US Dollar has been weaponized against Russia prompting many countries, including China, to contemplate a shift away from the reserve currency.

At Bitcoin 2022, Thiel started his speech with a video from him in the past, talking about the future of digital infrastructure. His predictions regarding cell phone usage, which may have sounded odd at the time, were quite accurate.

He also mentioned the dollar hegemony and even the potential for digitalization of the dollar, all of which we are seeing today.

The speech that followed was, in the words of Bitcoin Mag, “quite incredible” – he started by pulling out a wad of $100 bills, and presenting them to the crowd. He said, “It’s a mysterious thing, what is money?” He followed by offering the money to a random person in the crowd, a gesture to which many people responded.

“It’s kind of crazy that this still works,” Thiel said. While he is a billionaire, he had a point. He went on about how PayPal began, bitcoin’s placement in terms of velocity and more — and then he began talking about enemies of Bitcoin.

“If bitcoin is going to replace gold, the question is, why is it so undervalued?” he said. “Bitcoin is always the most honest market in the world, the most efficient market and it was the canary in the coal mine.” 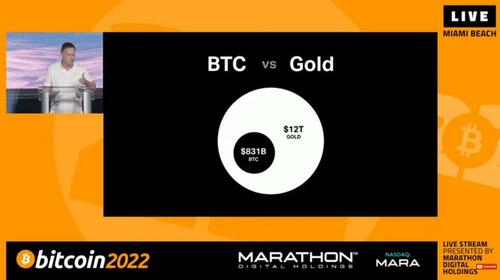 And so, while in the 1970s, equities were a bad investment, the great moderation that started in 1980 after Volcker killed galloping inflation, made equities the best investment of the past 40 years. However, now that inflation is as high as it was in the late 1970s, equities are the enemy and bitcoin is the right investment, according to Thiel. 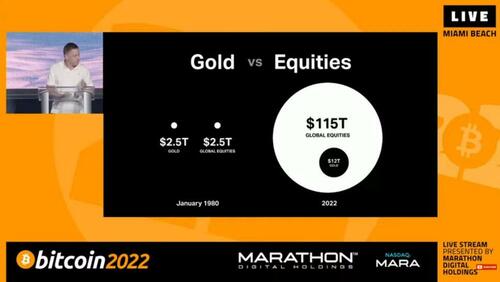 Concluding his musing on valuation, Thiel says that the competitor for bitcoin is not ethereum which is a payment system, nor gold, but equities and asks why shouldn’t there be parity between the $115 trillion value of global equities and the ~$830BN value of bitcoin. 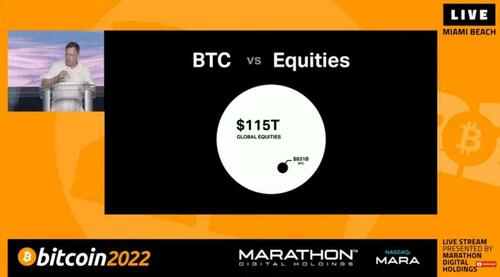 “I am still hopeful that bitcoin goes up by a factor of 100x” he said.

The Paypal founder then also makes a mockery of all those who say that bitcoin is not an inflation hedge with just one chart – the chart showing how anyone who had a sense of the inflationary tsunami that is coming, made a killing in early 2020 when the could have bought bitcoin at a far lower price.

Peter Thiel at @TheBitcoinConf: "Bitcoin is the most honest and most efficient market in the world." pic.twitter.com/P2QnjBS1ga

Thiel then moved on the truly shocking part of his speech where he put up pictures of Warren Buffet, Bill Gates, Larry Fink and Jamie Dimon… 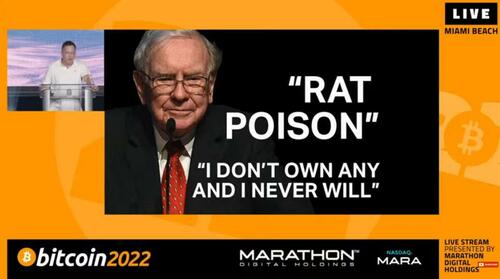 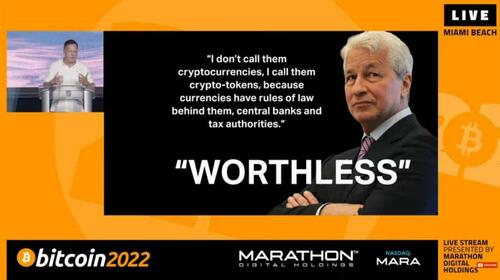 … whom he referred to as the “finance gerontocracy“… 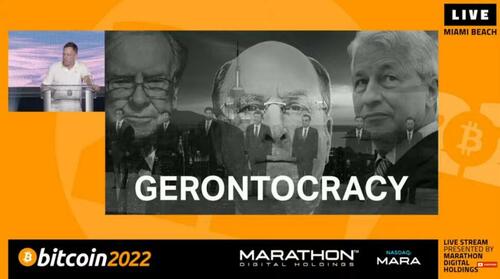 … and which he opposed to a “revolutionary youth movement” which embraces bitcoin. 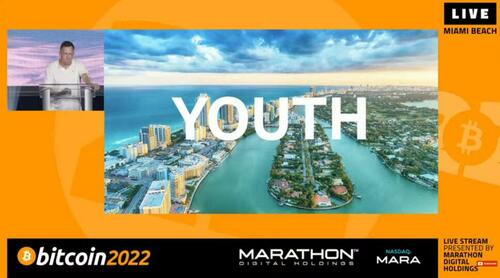 Thiel blamed the “gerontocrats” for Bitcoin’s failure to reach $100,000 pinning blame on Warren Buffett, whom he called a “sociopathic grandpa,” as well as Dimon, the 66-year-old chief executive officer of JPMorgan who called bitcoin a “fraud” on multiple occasions, and BlackRock’s Larry Fink, 69, who recently ran the Fed’s direct corporate bond and ETF monetization program. Thiel accused all three “gerontocrats” – who have frequently said they’re skeptical of Bitcoin or digital currencies in general – of using investing ESH practices as a “hate factory” to undermine Bitcoin and other businesses.

Extending on this, Thiel defined the conflict between the the old and new money, or the gerontocracy and the youth, simply as “BTC vs ESG.” 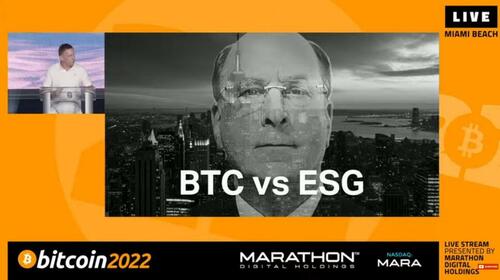 “Perhaps the real enemy is ESG,” he said to widespread to applause, explaining that ESG is just a “vast umbrella” term providing cover to various state and “gerontocracy” extensions, adding that ESG has been harnessed and weaponized against Bitcoin right now.

“If you have these sort of large institutional investors, they need to be allocating some of their money to Bitcoin. When they chose not to allocate to Bitcoin, that is a deeply political choice, and we need to be pushing back against them” Thiel said before explaining that the true enemy that is ESG – which we have repeatedly mocked over the years (here, here and here and here) for being the most hypocritical financial construct of the past generation – “is just a hate factory. It’s a factory for naming enemies, and we should not be allowing them to do that. When you think ESG, you should be thinking Chinese Communist Party.”

“Mr. Powell – people like that – should be extremely grateful to Bitcoin because it’s the last warning they are going to get,” Thiel said. “They’ve chosen to ignore it, and they will have to pay the consequences for that in the years ahead.”

Without missing a beat Thiel said that “bitcoin is not a company. It does not have a board. We do not know who Satoshi is” and laid out the war raging at the heart of modern finance as one between “the finance gerontocracy that runs the country through whatever silly virtue signaling/hate factory term like ESG they have versus what I would call a revolutionary youth movement… And we have just to go out and take over the world.”

Peter Thiel at @TheBitcoinConf: "Bitcoin is not a company. We don't know who Satoshi is. It's the finance gerontocracy running the country through whatever virtue signalling/hate factory term like ESG versus a revolutionary youth movement. We have to take over the world." pic.twitter.com/m5mlTtjF85

His full speech is below.