With China refusing to bend the knee to Washington’s “denounce Putin” demands, it appears the Biden administration’s narrative that the world is united against Russia is creaking at the seams as Bloomberg reports that cheap Russian Urals crude is finding willing buyers in India.

And why wouldn’t they… With Urals Crude trading at a stunning $30 discount to Brent, who can blame India for snapping it up.

“Russia is offering oil and other commodities at a heavy discount. We will be happy to take that,” one of the Indian government officials said.

The official added that such trade required preparatory work including transportation, insurance cover and getting the right blend of crude, but once that was done India would take Russia up on its offer.

Hindustan Petroleum Corp. recently bought 2 million barrels of the grade for delivery in June, and other processors are also seeking cargoes, according to people familiar with the matter. Mangalore Refinery and Petrochemicals Ltd. and Bharat Petroleum Corp. are looking to buy Urals crude for delivery in May and June, the people familiar with the plans said. 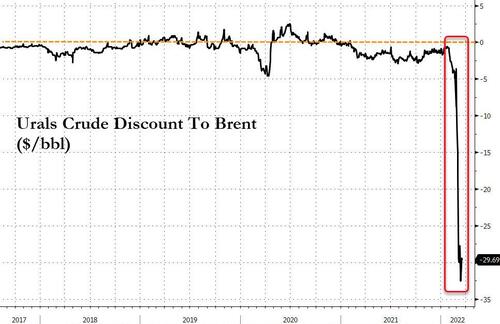 Oil Minister Hardeep Singh Puri told lawmakers on Monday that Indian buyers have contracted the equivalent of about three days’ worth of the nation’s oil needs from Russia, which will be supplied over the next three to four months. That works out at about 15 million barrels of Russian oil, given India’s daily oil requirement of five million barrels.

“Even if we were to scale this up considerably, it would still be literally a drop in a larger bucket,” the minister said in India’s parliament.

Bloomberg does note that, as many western and Asian banks have stopped issuing letters of credit for Russian shipments, it remains to be seen just how much Urals – which mostly loads at Baltic Sea ports – will flow to Asia.

The India (and China) buying comes as Russian Deputy Prime Minister Alexander Novak reiterated his warning that if Europe bans Russian oil, prices could jump to between $300 and $500 per barrel. His comments echo what he said last week:

“It is absolutely clear that a rejection of Russian oil would lead to catastrophic consequences for the global market,” adding that “the surge in prices would be unpredictable. It would be $300 per barrel if not more.”

Additionally, as we detailed previously, India is considering workarounds including rupee payments benchmarked to the U.S. dollar for buying the crude, government officials said recently.

While U.S. officials have said in recent weeks they would like India to distance itself from Russia as much as possible, they recognize its heavy reliance on Moscow for everything from arms and ammunitions to missiles and fighter jets. In other words, India quietly gets a carte blanche to continue trading with Russia in violation of western sanctions.

In other words, all sanctions are created equal, but some are more equal – and can ignore the sanctions – than others.

India is not only the biggest arms importer in the world, but, as Statista’s Katharina Buchholz details below, it is also the biggest customer to the Russian defense industry, data from the Stockholm International Peace Research Institute shows. 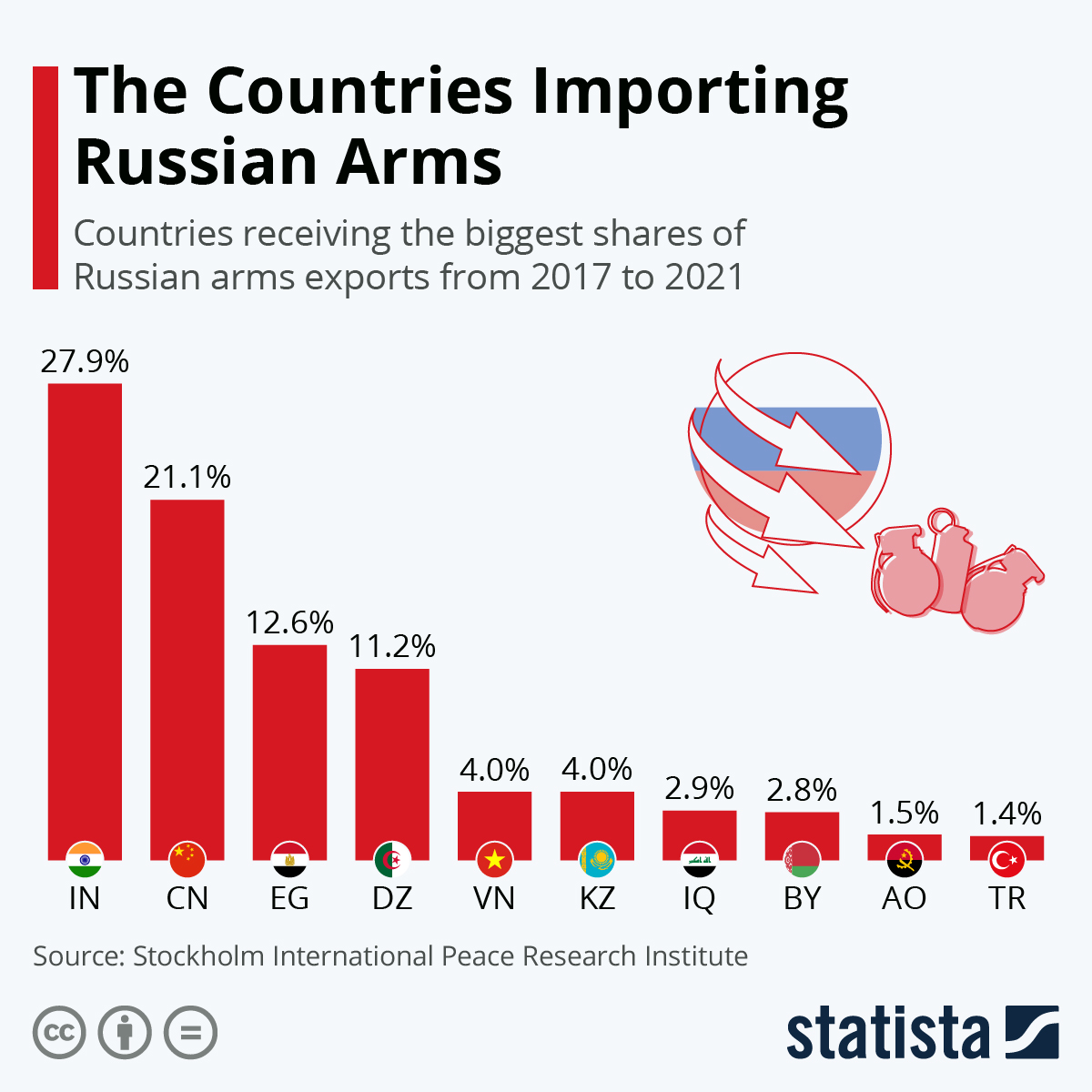 India’s dependence on Russian defense technology has been identified as one of the main reasons why the country did not speak out against Russia after the country invaded Ukraine at the end of last month and instead has attempted to remain neutral.

As a reminder, ‘Chindia’ represents 2.7 billion humans – not a small segment of the global population that appears comfortable dealing with one of the the world’s major producers of energy, food, and arms.