Is Apple About to Announce a $5 Billion Bitcoin Purchase? One Bank Thinks So

Over a month ago, we correctly predicted today’s “shock” announcement by Tesla, in which Elon Musk’s company decided to pivot once again, this time into the word of cryptocurrencies, by purchasing $1.5 billion in bitcoin (an amount which will give it tremendous leeway in non-GAAP financial when accounting for XBT Mark-to-Market moves, giving it even more buffer to beat estimates).

Discussing the major US companies which we expected would announce shifts away from dollar-based cash into bitcoin, we said “one such company which we are convinced will announce it is converting billions of its existing cash into bitcoin, is none other than Tesla, whose CEO Elon Musk was urged by MSTR CEO Saylor to make a similar move with Tesla’s money. And since Musk, already the world’s richest man thanks to the most aggressive financial engineering on the planet, has never been one to shy away from a challenge, we are absolutely confident that it is only a matter of time before Tesla announces that it has purchased a few billion bitcoin.”

While as of this morning, this prediction has clearly come true, we’ll remind readers that our January forecast had a follow-on component: once Tesla breaks the seal on major companies converting cash (and equivalents, including buybacks) into bitcoin, other companies would quickly follow suit. This prompted us to inquire the general public which company would be next.

Conveniently, just as we were scratching out heads over this critical question – which also answers how Bitcoin will hit $100,000 next – RBC published an initiating coverage report on AAPL (with a street-high price target of $171), in which analyst Mitch Steves explained why he believes that AAPL should focus on developing an “Apple Wallet” concept first (and leave the Apple car for later), in order to leverage its 1.5 billion installed user base and to unveil a Coinbase-like Apple Exchange later which allows bitcoin transactions and which would add about $50 billion in value.

More importantly, the RBC analyst then says that should Apple purchase just $1 billion in bitcoin, or “4 days of cash flow”, it would send even more users to “Apple Exchange”. To be sure, in the aftermath of Tesla’s announcement today, which validates the so-called “use case” and confirms that rising adoption of bitcoin among some of the most advanced companies is just a matter of time, such an outcome is even more likely.

Below we lay out some of the key highlights from Steves’ note, in which he first discusses the “low risk, high reward” Apple Wallet opportunity…

When we think of the Apple Wallet, there is a clear opportunity in our view to create a buying and selling mechanism for crypto currencies (in addition to standard payment processing – although not necessary). To be clear, we do not believe Apple needs to hold bitcoin as a balance sheet asset (although it would likely help – more on this later), but rather allow users to buy and sell crypto assets.

Taking a big picture view of this, if we look at recent articles from The Block, which suggest Coinbase will be valued at ~$50B (at $200/share), this means Apple could potentially generate a similar or higher amount of value. Why? The firm already has a robust software ecosystem and install base to take significant and sudden market share from crypto currency exchanges (others include Binance, Kraken, and Gemini – all private companies but would be competitors in this situation). Looking at PayPal, for example, the firm now allows for buying and selling of crypto assets but does not allow for crypto assets to be sent off the system to a hardware wallet (individual custody). While many users/customers would not like this aspect, it has not stopped PayPal from generating additional revenue in a closed ecosystem.

In fact, if we think about a closed ecosystem, it removes the risk of the asset being removed from an exchange. According to  Glassnode, exchange balances are falling and this would disrupt the exchange business model as there would be no assets to buy and sell for a fee. 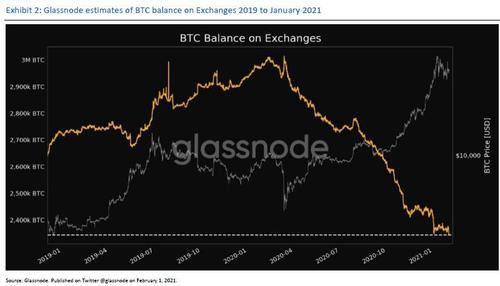 And while Apple expanding into a market currently dominated by Coinbase and to a lesser extent Paypal, is quite likely, a more controversial thesis proposed by the RBC analyst is that Apple could outright add bitcoin to its balance sheet… just as Tesla has now done. Consider:

While the bigger business is likely in the exchange of assets, we think the firm could also fund its own initiative by adding a small amount of Bitcoin (or another crypto asset) to its balance sheet. If we assume that the firm can add $1B to its balance sheet (only ~4-5 days of cash flow) we think the price of the underlying asset would then go up in a substantial manner. Looking at it from another angle, if we assume that the cost of developing a crypto wallet/exchange on the Apple ecosystem would cost $500M, they could synthetically pay for the development cost by acquiring the underlying asset. For example, if the firm purchased $5B of Bitcoin (20-25 days of cash flow), the price of the underlying asset would need to rise by 10% for the firm to fully fund the entire project in the first place! This is a solid value proposition in our view as the business would be funded without diluting any other projects at the firm (iPhones, potential cars, etc.)

And while our readers are all too aware of MicroStrategy’s ongoing accumulation of bitcoin as the company has pivoted from its legacy business model to becoming one of the market’s key proxies for bitcoin exposure, Steves then brings up the MSTR case study to those who are unaware.

The stock price of MSTR is now almost $1000, a 10x-return in six months. The real question should be not who will, but who won’t convert some of their cash to bitcoin.

Steves then also points out the PayPal bitcoin announcement, when on October 21, 2020, PayPal announced that it would allow users to buy/sell/hold crypto currencies in a closed ecosystem. Meaning that individuals cannot send their crypto assets to a hardware/digital wallet and must hold the assets on the PayPal network.

Steves’s conclusion is obvious: “if Apple were to announce that the firm is entering into the crypto exchange business and purchasing the assets as a reserve asset ($5B would only represent ~20 days of cash flow), this would likely send the price of the  underlying asset up and fund the project entirely”, and – judging by the TSLA experience – it would also send AAPL stock to new all time highs, in what is clearly a win-win outcome for everyone. The only question is when will Apple pursue such a strategy.

Actually there is another question: with virtually no market participants in the crypto “proxy” space, what we wonder is how many other companies will follow in Tesla’s footsteps and convert some of their cash into a currency which unlike the dollar, has a hard dilution ceiling (only 21mm will ever be created) and thus will preserve its value far, far better than the world’s (fading) reserve currency is long forgotten.