“It Was a Non-Event”: MSM Forced to Admit Nationwide Pro-Trump Protest Panic Was Overblown

“It was a non-event today and we are glad it was.”

That’s how Troy Thompson, spokesman for the Department of General Services – the agency that protects the Pennsylvania Capitol in Harrisburg, described yesterday’s mass national armed protest “domestic terrorism” event that the mainstream media (and various government agencies) has been “warning” ‘good’ Americans about all week.

As we reported in detail yesterday – avoiding the mainstream media’s jump to a pre-conceived narrative conclusion – armed protesters did indeed appear at multiple state capitol complexes across the country Sunday morning.

This followed a special bulletin from the FBI last week that warned: “armed protests” were being planned at 50 state capitols and the US Capitol in Washington, DC, ahead of President-elect Joe Biden’s inauguration on Jan. 20. This was immediately picked up by the media and amplified dramatically… 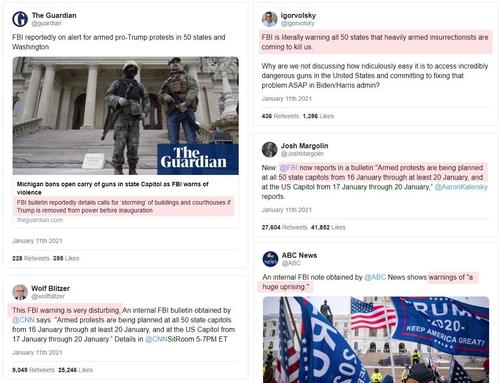 However, as Reuters reports, only small gatherings of demonstrators had taken to the streets alongside much larger crowds of law-enforcement officers and media personnel.

“I am not here to be violent and I hope no one shows up to be violent,” said one man standing on the lawn in front of the capitol.

The man, who refused to give his name, wore a “Make America Great Again” hat and waving a “Don’t tread on me” flag.

And furthermore, as we detailed previously, while the protesters are being identified across various platforms as members of a so-called “boogaloo” movement, they largely appear to be generic anti-government anarchists – some of whom call themselves “liberty boys,” and others who oppose the conservative Proud Boys. Their sudden emergence surrounding the inauguration is curious, to say the least.

Even The Guardian was forced to admit:

“At heavily fortified state capitals across USA on Sunday, law enforcement & media outnumbered protesters, with only a handful of armed men showing up to planned demonstrations.”

Some local news agencies flipped the narrative, proclaiming that the lack of turnout of “domestic terrorists” was due to the outsize presence of National Guardsmen nationwide.

We suspect otherwise, as we have already seen numerous walkbacks of hyperbolic headlines and statements from various deep-state-loyal agencies:

So who could blame Americans for not trusting the media or the government?

As Jordan Schachtel concludes, the FBI seems to be grossly exaggerating the capabilities of a fringe network of activists that does not have the capacity to mobilize significant numbers of people. Certainly, they do not present a threat of “insurrection,” or anything close. In leaking these bulletins to the media, it appears that the Bureau is once again, after four years of “Trump-Russia” madness, engaged in unsavory activism and attempts to manufacture a political narrative. 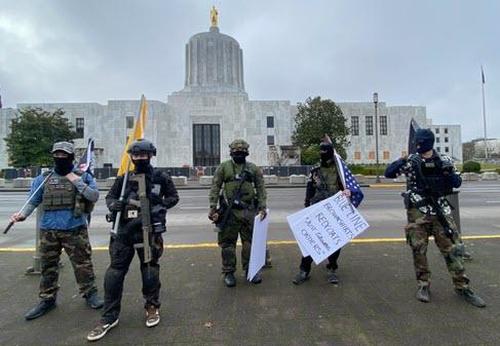 However, given this embarrassing propaganda-rife exaggeration of threats, and the FBI ‘lies’ and these local prosecutors’ ‘lies’, the chances of a ‘false-flag’ event are rising rapidly as one might just get the impression that fear is being ratcheted up for political gain and to enable Patriot Act II’s crackdown on “domestic terrorism” to more easily slide between the cheeks of an anxious American public desperate to be saved from this terror – to hell with liberty, just do something!