“It’s a War Zone”: South Africa to Deploy 25,000 Troops as Country on Brink of Civil War

In the past seven days, South Africa has never come closer to becoming a failed state. The riotous looting has reduced Gauteng and KwaZulu-Natal, the two provinces hit hard by the social unrest into what resembles warzones. The country quickly descended into what could be the beginning innings of a civil war, prompting the government to call up military reserves and seek deployment of up to 25,000 troops to quell the violence.

“It is a war zone . . . towns deserted, shops looted, bodies lying on the road,” John Steenhuisen, leader of the main opposition Democratic Alliance, in the province, told Financial Times. “We have an internal African National Congress battle that has spilled over on to the streets of KwaZulu-Natal . . . the initiative has been completely lost by the security services. They need urgent reinforcement.”

Gauteng and KwaZulu-Natal have been overwhelmed by black rioters, many of whom are supporters of former President Jacob Zuma, who was arrested earlier this month and sentenced to prison for corruption charges.

The arrest of Zuma sparked black unrest across the country, more specifically in the two provinces mentioned above.

President Cyril Ramaphosa has been unable to stifle the social unrest as local police and military troops have been outnumbered. The nation remains totally lawless.

Defence Minister Nosiviwe Mapisa-Nqakula told parliament Thursday she had “submitted a request for deployment of plus-minus 25,000” soldiers. There was no word on when the additional troops would hit the streets.

Readers may recall, Wednesday evening, we reported South African Army Reserve has ordered “all Reserve Members” for duty on Thursday morning. There were no exact figures on how many reserves would be deployed.

So far, more than 70 people have died in the mayhem and more than one thousand arrested. The nation’s supply chains have collapsed as major oil refiners shuttered, ports closed, infrastructure damaged, and warehouses looted.

Some figures estimate 45,000 businesses in Durban, a coastal city in KwaZulu-Natal, have been destroyed. This has resulted in gun stores, grocery stores, pharmacies, and shopping malls either being entirely looted or ran out of supplies as massive shortages begin.

“With no help in sight, racial minorities such as whites and Indians are taking up arms to defend their homes and families,” said National Justice.

Johannesburg resident Nhlanhla Lux told FT he defended local businesses with a handful of police and soldiers on Wednesday.

“We can’t sit back while the township economy dilapidates further,” said Lux. “The biggest mall, that employs the biggest number of people, is the one left standing. If it falls, it’s the last elephant.”

For Lux, he is prepared to die” to halt the unrest, he said. “We are on the verge of eating each other.”

So, is it a civil war, a coup d’état, or instigation toward a Rwanda-type situation? Or, simply the poor eating the rich? The major question is why did the state security apparatus not see this coming? Or did they? And further, where is the state of emergency? Where is the tear gas to disperse crowds? Where is the sound cannon and where is the water cannon? Why are the crowds not being dispersed? At this moment, it could be a first force, a second force or a third force, some combination or some weird conflation, in charge of the lawlessness.

According to the “Unrest Map” via PolicyLab, the unrest is beginning to fizzle out in Gauteng and KwaZulu-Natal. The concerns are if riots spread to other provinces. 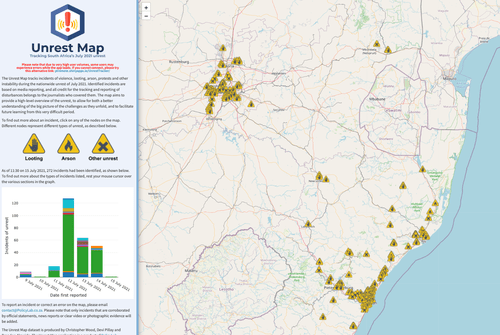 The government is preparing to reduce further riots by activating thousands of more troops and reserves. The rand strengthened against the dollar for the second day on this positive news. 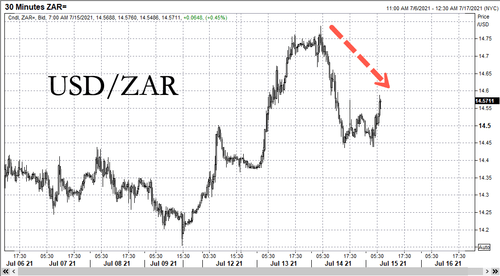 However, emerging from the smoke is a nation that could be close to civil war, the economy destroyed, supply chains crippled, ports closed, infrastructure ablaze, and there’s no telling on how long it would take to rebuild.

Residents of towns are setting up checkpoints since police and military are non-existent.

The reality in Durban today. Long lines for basic essentials since shortages of ammo, food, and fuel begin. Next, humanitarian crisis?

????? Such is the reality in Durban most shops don't even hv essentials #KZNViolence pic.twitter.com/JAVx6ZMmq2

And if you a black resident in the area
This applies to you too ??ask me
Experienced it… We were only allowed to our R500 worth of petrol#KZNshutdown #KZNViolence #WhiteSupremacy pic.twitter.com/3vGf7LLKAl

Huge lines for food as supply chains crippled. People are beginning to starve. No one was prepared.

People waiting for food, leave family at home and most shops are closed or empty now.#SouthAfrica #SouthAfricaBurningpic.twitter.com/HNO75oIdGZ 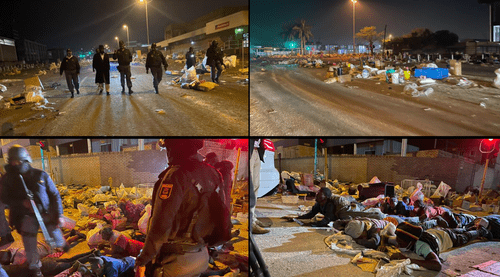 I love to see it!! Now people are queueing to buy!! How does it feel? Does it feel good like it felt when y'all were looting? Where is Duduzane, Duduzile and Malema? Are they queueing with you? See it! Here!!#PhoenixMassacre #malema #ShutdownSA #ShutDownGauteng #KZNshutdown pic.twitter.com/b97lZpEDi4

What happens next in a country that is collapsing remains unknown.