Britain’s largest supermarket chain warned “the worst is yet to come” on food inflation as the cost-of-living crisis pulverizes the working poor.

Paul Hawkins discusses Tesco Chairman John Allan has saying the ‘worst is yet to come’ in the cost of living crisis.

He said food and energy inflation would change consumer spending patterns, buying fewer luxury goods and big-ticket items and going out less to eat. Food inflation comes as households experience one of the most significant jumps in annual energy costs in years.

“It troubles us, and I’m sure troubles many people, that people may have to struggle to choose between heating their homes and feeding their families,” he said. “And that’s clearly not a situation that any of us should tolerate.” 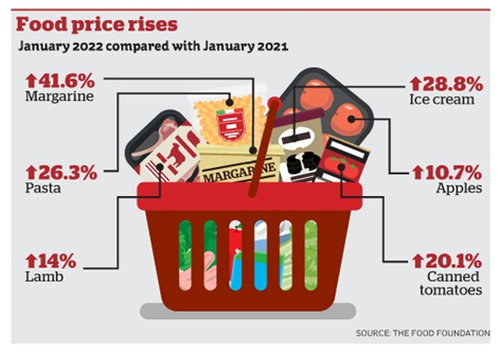 For some context for our international readers, Tesco controls about 28% of the UK grocery market. So when Allan speaks about the worst of the food inflation has yet to come — it’s very concerning that food price hikes might continue well through spring. It’s still unknown the social ramifications of high inflation.

In December, inflation was the highest in three decades had put tremendous pressure on the Bank of England (BoE) to raise key interest rates to quell inflationary forces. For the second time in three months, BoE raised interest rates to 50bps. Implied rates suggest rate traders believe more hikes are coming down the pipe.

While the BoE tries to mitigate pain on already-struggling households, especially those of low income, rising interest rates are already producing volatility in fixed income markets and spreading to equities. Investors owning companies that can deal with price shocks could be a safe haven to navigate this rocky period.