Nevada’s leisure and hospitality sector—which made up around a quarter of the state’s total labor market before lockdowns—has been one of the hardest hit by the virus-induced downturn. The labor market recovery in the state, nevertheless, Las Vegas, could take between 18 and 36 months to recover.

With no quick “V” shaped recovery expected in Vegas, rather one that could resemble a “U” or “L” – households are expected to remain severely pressured as job opportunity remains scarce. And due to months of stimulus checks earlier this year, deleveraging among households could be nearing thanks to a fiscal cliff (read: here). Only another stimulus check can delay the inevitable.

Bloomberg reports tourism on the Las Vegas Strip remains depressed. Now all those workers who were recently laid off can’t afford rent.

RealPage, Inc., who develops multifamily property management software, revealed as of September, an alarming 10.6% of Vegas apartment tenants were unable to pay rent, up from 4.1% a year earlier, the most significant increase of any other metro area in the US. 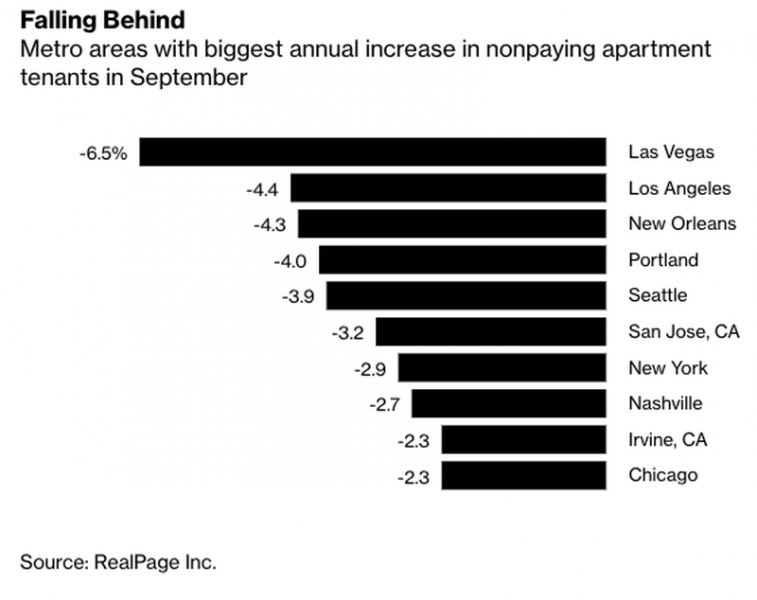 Los Angeles, New Orleans, Portland, and Seattle were other metro areas where the biggest annual increase in non-paying apartment tenants for the month of September.

The ongoing rent crisis is a national issue. The CDC announced in early September that it was establishing a temporary ban on evictions across the country. As many as 40 million Americans could be booted from their rentals as the virus-induced downturn continues.