The CDC is clearly concerned that it’s losing the PR war to convince Americans that they must mask up and get vaccinated. Because less than a week after declaring that it would revive its mask mandate, the CDC has just pulled a classic media trick: turning the fearmongering nob up to ’11’ by leaking an “internal report” that supports the official narrative (even making it look like the more moderate of two options) while laundering the source of the information by allowing a reputable news org to market the story as an “exclusive”.

A slide deck apparently shared widely inside the agency in the weeks after it first lifted the original mask mandate in May shows that the delta variant appears to cause more severe illness in younger patients, while spreading as easily as “chickenpox.” What’s more, it warns that the vaccine’s ability to spread via infecting the already vaccinated means the CDC should impose even more stringent guidance – the presentation called for “universal masking.” The document “strikes an urgent note, revealing the agency knows it must revamp its public message to emphasize vaccination as the best defense against a variant so contagious that it acts almost like a different novel virus.”

Most critically, the slide deck includes “still-unpublished data” from studies showing that even the vaccinated might be able to transmit the virus as easily as the unvaccinated.

According to the Washington Post, the material in the report was “so alarming” that it prompted the CDC to reconsider its masking guidance, and President Biden to impose his federal employee vaccination mandate (with a few notable exceptions) despite his earlier promises not to do so.

Not only does the presentation include “new science”, it also suggests “a new strategy” for communicating the urgency of the situation to the public, noting that “public trust in vaccines might be undermined” when people hear about breakthrough infections. At one point, the deck declared that “the war has changed,” describing delta as if it were a totally new virus.

Well, maybe Pfizer and the government should have thought about that before they published obviously inflated efficacy numbers of +90%.

Despite that obvious blunder, WaPo was still able to fund a talking head to praise the government’s vaccine strategy.

Matthew Seeger, a risk communication expert at Wayne State University in Detroit, said a lack of communication about breakthrough infections has proved problematic. Because public health officials had emphasized the great efficacy of the vaccines, the realization that they aren’t perfect may feel like a betrayal.

“We’ve done a great job of telling the public these are miracle vaccines,” Seeger said. “We have probably fallen a little into the trap of over-reassurance, which is one of the challenges of any crisis communication circumstance.”

The thing to remember here is that this data is already dated. The story readily admits the presentation was circulated months ago.

Former FDA head Dr. Scott Gottlieb has highlighted data suggesting that the US outbreak will follow a similar trajectory as delta-driven outbreaks in the UK and Europe. The pattern is already most obvious in states like Missouri, one of the original hotbeds for the delta outbreak. 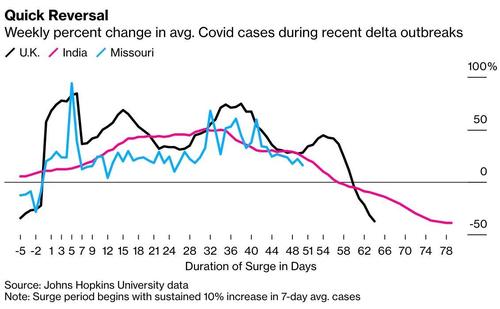 The key to understanding this is a rate known as Rt, a representation of how many people are being infected by each new case. When it falls below 1, that means the rate of viral spread is slowing. And the data suggest that it’s already on that trajectory.