Finally, after a handful of organizations tried suing Dr. Anthony Fauci in order to have them released, the good doctor’s financials – along with those of his wife, who is the NIH’s top bioethicist – have been disclosed in detail. And they were leaked by the same Senator who Fauci called a “moron” last week during a hot-mic moment.

We already knew that Dr. Fauci is the highest-paid federal government employee, earning an annual salary of more than $400K. His wife, Christine Grady, earns $176K as Chief of the Department of Bioethics at the NIH.

The records, published by Republican Roger Marshall, himself a doctor and also the junior US senator from Kansas, showed that the Faucis’ have a combined net worth of more than $10 million.

?? BREAKING! I obtained Dr. Fauci’s previously unpublished financial disclosures. Dr. Fauci was completely dishonest about his disclosures being readily accessible to the public which is why I am releasing them now.

As the Daily Mail explains, Fauci, 80, has led the National Institute of Allergy and Infectious Diseases since 1984 and, if he continues until the end of Biden’s term in 2024, will have made roughly $2.5MM as the president’s chief medical advisor. When he retires, Fauci’s pension will be the largest in US history, exceeding $350,000 per year.

As a reminder, Dr. Fauci lied to Congress yet again by insisting that his financials were public, when they very much weren’t (before being leaked by the Senator from Kansas, that is).

While the doctor has insisted he hasn’t profited from the pandemic, his paperwork showed that he and his wife were paid $14,000 to “virtually” attend a series of galas directly related to his position as the nation’s de facto COVID czar.

Perhaps the most entertaining disclosure from Dr. Fauci’s financials is the revelation that the couple owns a restaurant in tony San Francisco. It’s called Jackson Fillmore Trattoria. Unfortunately for them, the restaurant didn’t make any money last year.

Sen. Marshall clashed with the 80-year-old doctor on Tuesday when Marshall wanted to see Fauci’s financial information. Fauci replied that the documents were public, and appeared to take umbrage at even being asked. “Yes or no, would you be willing to submit to Congress and the public a financial disclosure that includes your past and current investments?” Marshall asked. “Our office cannot find them.” Fauci replied: “I don’t understand why you’re asking me that question…my financial disclosure is public knowledge and has been so for the last 37 years or so.”

According to the Center for Public Integrity, Fauci’s financial statements were indeed publicly available, however, obtaining them was a lengthy procedure: they requested the document in May 2020 didn’t receive it until three months later. 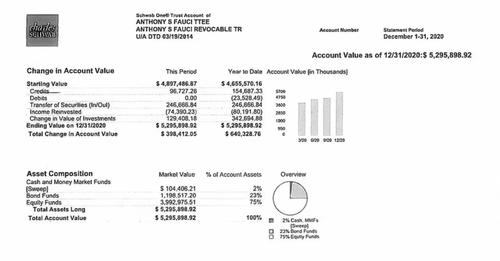 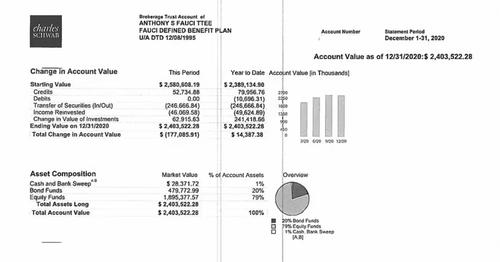 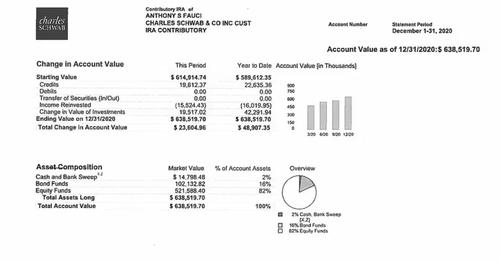 Most of Dr. Fauci’s wealth comes from his government salary, but he has also made a substantial portion from books and appearances. Sen. Marshall is pushing for a new law called the “FAUCI Act” that would require unelected bureaucrats like Dr. Fauci to produce more thorough financial disclosures so that they can be appropriately scrutinized by the American public.

Readers can find more disclosures on Sen. Marshall’s website, which features a more comprehensive breakdown of the doctor’s financials, along with copies of all the associated paperwork.