During the first months of quarantine, when nobody really had any idea whether they’d be seeing their colleagues again next week, next month, or next year, reporters churned out stories about people walking, jogging or otherwise exercising to try and squeeze out a little endorphin boost while also helping to prepare one’s body for the worst-case scenario (after all the stories we have published about COVID “long haulers”, those risks, however slight, should be widely understood).

But as the months dragged on, it appears Americans turned instead to a quick buzz as rates of drinking alcohol, using drugs and, now, smoking cigarettes climbed. As WSJ reports, 2020 was the first year in decades that cigarette use among Americans increased, instead of declining.

Even though the “vaping illness” has been largely attributed to an additive in illegal marijuana vaping products, sales of nicotine vaping products never rebounded from the paranoia it caused. A sense of pervasive skepticism lingers, as several of the WSJ’s sources pointed out. In the US, cigarette sales topped sales from five years’ ago when many consumers switched back to cigarettes after trying first-generation vaping devices.

Before the pandemic, cigarette sales had been falling at an accelerating rate. Sales declined by 5.5% in 2019. But in 2020, the trend suddenly reversed, and sales were flat.

The reasons for the spike in cigarette sales aren’t too difficult to deduce: Being stuck at home all the time gave people more opportunities to smoke, while the inability to go out and see and meet people essentially forced them to save money on gas, travel and entertainment, which they could then spend on cigarettes). The Virginia-based company posted EPS of $1.03 (or 99 cents per share on an adjusted basis). That’s a couple cents shy of what Wall Street had expected. Still, cigarettes outperformed many other consumer products, and sales in 2020 were even stronger than in 2015, when a drop in gas prices gave consumers more discretionary money to play around with.

Despite the success in cigarette sales during the prior 12 months, Altria didn’t offer a projection for cigarette sales in 2021, saying Thursday that it would depend in part on the rollout of the COVID-19 vaccine, an excuse that has been offered by pretty much every publicly-traded US company.

E-cigarette sales were booming by the fall of 2019 as the popularity of the Juul vaporizer, which caught on among teens and got a whole new generation of Americans addicted to nicotine and tobacco, were blamed for reviving the practice, especially in the US. But many of those same users have apparently now made the switch to cigarettes. 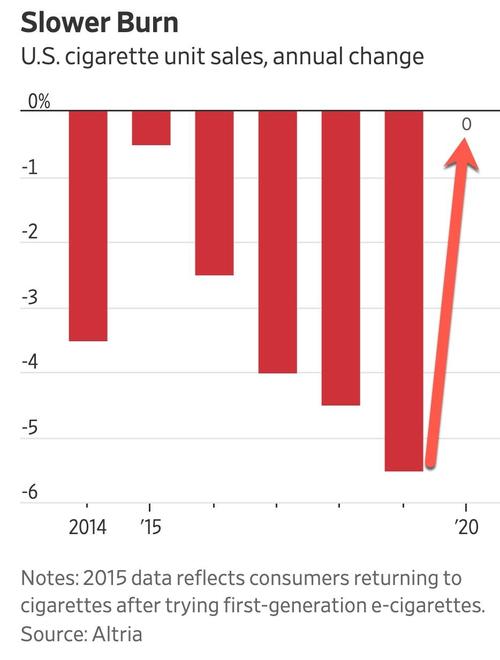 Recognizing this, ederal regulators under Dr. Scott Gottlieb, who ran the FDA before Dr. Stephen Hahn, moved to crush cigarette sales when they raised the federal age for legal tobacco purchases to 21, while pushing President Trump to bar flavored vapes and menthol cigarettes, though the president ultimately demurred.

And if the COVID-19 vaccination process takes even longer than Dr. Anthony Fauci & Co. are saying, we imagine next year might be another big year for tobacco sales as well, especially as the Biden Administration roles out the stimulus checks and unemployment benefits.