Now in its second week, Julian Assange’s extradition hearing at the Old Baily in London just heard explosive testimony based on previously reported revelations that the CIA had actively plotted to assassinate him, by either poisoning or via a kidnapping plot.

The testimony is part of the defense team’s attempt to frame the US extradition case as entirely political in nature, and not based on breaking US law, but also toward convincing the judge that the WikiLeaks founder would certainly face extreme and excessive punishment, which would be cause for Britain to block the extradition.

Though mainstream media has by and large ignored much of the bombshell testimony from the hearing since last week, this latest cloak-and-dagger type information detailing just how far US intelligence was willing to go is impossible to ignore.

Even The Guardian is now belatedly reporting on it:

Plans to poison or kidnap Julian Assange from the Ecuadorian embassy were discussed between sources in US intelligence and a private security firm that spied extensively on the WikiLeaks co-founder, a court has been told.

Details of the alleged spying operation against Assange and anyone who visited him at the embassy were laid out on Wednesday at his extradition case, in evidence by a former employee of a Spanish security company, UC Global.

Outrageously, the US used the Spanish front company to plant “intrusive and sophisticated” secret surveillance devices in the Ecuadorian Embassy in London where Assange had been living under asylum for seven years.

While officially the firm was in charge of protecting the Ecuadorian embassy, it was simultaneously acting on behalf of the US authorities, which was engaged in eavesdropping on Assange and his visitors who entered the diplomatic building to meet privately with him. Plotting by US intelligence even involved scenarios wherein a “kidnapping” or killing could be made to look like an “accident.” 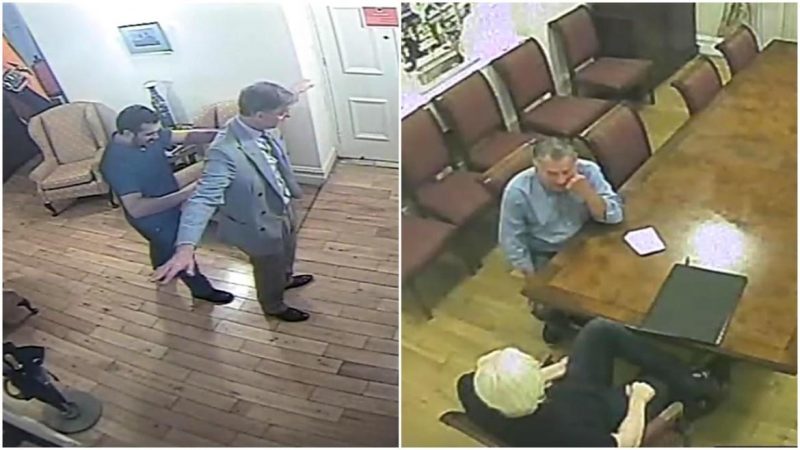 Via The GrayZone–Left: A UC Global spy pats Lowell Bergman down at the entrance to Ecuador’s embassy in London. Right: Footage secretly recorded by UC Global of Bergman’s meeting with Assange.

And even more shocking and outrageous, biometric information was taken or sought even centered on family members and close acquaintances of Assange as they visited the embassy.

This even involved plans to lift a DNA sample from his baby’s dirty diaper, as The Guardian details further of Wednesday’s testimony:

Microphones were concealed to monitor Assange’s meetings with lawyers, his fingerprint was obtained from a glass and there was even a plot to obtain a nappy from a baby who had been brought on regular visits to the embassy, according to the witness, whose evidence took the form of a written statement.

The testimony was so explosive that two key eyewitnesses who previously worked for UC Global were allowed to issue their statements under anonymity.

This legal protection was granted because they believe the private security firm’s director, David Morales, or even US intelligence officials he works with could seek to harm or kill them. The Guardian continues with the following:

The founder and director of UC Global, David Morales, had said that “the Americans” had wanted to establish paternity but the plan was foiled when the then employee alerted the child’s mother. Anonymity was granted on Tuesday to the former employee and another person who had been involved with UC Global, after the hearing was told they feared that Morales, or others connected to him in the US, could seek to harm them. Details of their written evidence were read out at the Old Bailey in London on Wednesday by Mark Summers QC, one of the lawyers for Assange, who is fighting extradition to the US on charges relating to leaks of classified documents allegedly exposing US war crimes and abuse.

The below leaked image was previously described by El País: “Julian Assange’s friend Stephen Hoo walking into the Ecuadorian embassy in London with one of the cyberactivist’s babies in 2017.”

#8: As part of espionage operation against WikiLeaks founder Julian Assange, the owner of Spanish security company obsessed over whether Assange was father of child who was brought into Ecuador embassy. He ordered diaper to be stolen for DNA testing. https://t.co/iHcI2pNdhL

Again, the defense is hoping the testimony is a damning enough indictment of the CIA and its partners’ massive intrusion on Assange’s basic legal rights and protections as to prevent the US requested extradition.

US wanted to kill WikiLeaks founder and make it look like accident:https://t.co/HsR7DebDxx

Indeed considering two star eyewitnesses for the defense (who themselves essentially were involved in the prior invasive surveillance of Assange) are fearful enough about what they have to offer as to essentially seek a form of temporary ‘witness protection’ by the London court, this should make it glaringly obvious that the whole thing is a political witch hunt of a whistleblower who exposed American war crimes abroad.

Should the UK deem that Assange is at risk of cruel punishment or even death if extradited to US custody, it must strike down the request based on existing laws.