Are the Ukrainians escalating their attacks on Russian territory?

Two days after Ukrainian forces blew up a fuel depot during the first cross-border attack on Russian territory, yet another attack has been reported in Belgorod.

During the previous strike, two helicopters purportedly belonging to the Ukrainian air force destroyed a Rosneft fuel depot in an attempt to cripple Russian logistics. To be sure, the Ukrainian high command has denied any involvement in the attack, insinuating instead that it was a ‘false flag’ operation planned by Moscow to justify further brutality in Ukraine. 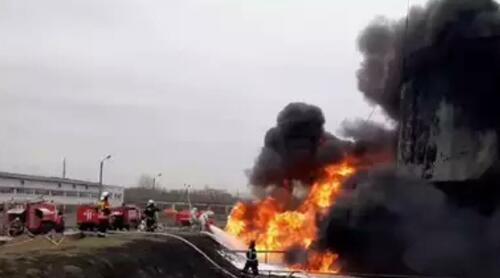 According to Reuters, which cited two witnesses, explosions were heard in the Russian city border city. The source of the blasts wasn’t immediately clear.

Two blasts were heard in the Russian city of Belgorod near the border with Ukraine on Sunday, two witnesses told Reuters, days after Russian authorities accused Ukrainian forces of striking a fuel depot there.

The cause of the blasts was not immediately clear. One witness said the blasts were so powerful that they rattled the windows of her home in Belgorod.

The blasts come days after Russia’s defence ministry said two Ukrainian helicopters struck a fuel depot in the city, some 35 km (22 miles) from the border with Ukraine, after entering Russia at extremely low altitude in the early hours of Friday.

Locals also reported another blast in a nearby village (although they claimed nobody was hurt).

A local official from the region around Belgorod said there had been a blast in the village of Tomarovka on Sunday but that no one had been hurt and no property damaged.

“There was a bang, debris fell onto the ground,” Oleg Medvedev, head of the Yakovlevsky city district outside Belgorod, wrote on the Telegram messenger application.

He did not elaborate on the nature of the debris nor on the cause of the blast. It was unclear if the blast described by Medvedev was one of the blasts heard by the witnesses.

Western military analysts were quick to parse the original strike in Belgorod in a manner that celebrated the Ukrainian’s tactical achievements (per @MarkHertling):

Ukraine's strike of the fuel depot at Belgorod was MUCH more than a bold tactical move.

While 1.5 M gallons of fuel is certainly a critical target & will be significant in this logistics war…there's more.

This is what's called a "deep strike" in US military parlance. 1/6

Ukraine’s strike of the fuel depot at Belgorod was MUCH more than a bold tactical move.

While 1.5 M gallons of fuel is certainly a critical target & will be significant in this logistics war…there’s more.

This is what’s called a “deep strike” in US military parlance.

A deep strike is meant to cause physical damage to the enemy, but it’s also designed to cause increased fear, a feeling that no where is safe, & it sends the message ” we will come after you everywhere, especially when you’re not expecting it.”

The Russians believed Belorus and RU territory were safe havens. They’re now less confident of that.

The RUs believed they could return to bases in Belarus – to the motor pools they once occupied – and reconsolidate and they would be untouched. No more.

A deep strike doesn’t directly or immediately affect the front line troops …but it does have a significant effect on the troops in the rear (the logistics folks, and those returning from the fight).

That’s a big deal, and it has huge psychological implications.

Beyond being bold & audacious, this UKR strike into Belgorod required more than just 2 helicopters striking a target…

It required analysis of target set, planning of the mission, preparation of the routes, jamming of the enemy radars, and a precise strike ability.

The fact that the UKR leaders will not “confirm or deny” they did the strike is also – to me – an exclamation point.

That’s panache. Ukraines got it going on.

Of course, that presumes that the Ukrainians were indeed behind the strikes.

Here is what the map of the area of operations looks like today: 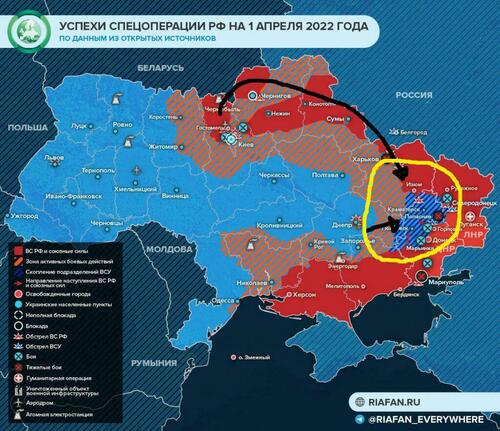 But, as The Saker clarifies, while the maps do, more or less, show the military reality on the ground, they do not show the political realities the same way.  The truth is that there are plenty of towns and cities which are blocked/surrounded by Russian forces, but which are still run by the “old” authorities.

The Saker believes this means the following:

Still, we need to remember that all wars are political in nature and that while the military “pain dial” is turned up quite high for the Ukrainians, the US PSYOPs are still telling the Ukrainians that they are winning and soon the first Ukie tanks will enter Moscow.  The de facto fall of Mariupol (as evidenced by the desperate attempts to evacuate the Azov leaders by helicopter) is already a major blow for the Ukrainian narrative.  But this blow pales in comparison to what will happen when the best forces the Ukraine has will simply disappear from the maps of the Donbass.  At that point, no amount of hot air, grand statements or other lies will make a difference – such a defeat is impossible to conceal, it will make the news.