Ukraine’s Presidential Office has said the second round of talks with Russia are moving forward, after there were prior doubts on whether they would happen. “Now it’s official. The second round of talks between Ukraine and the occupier will take place today,” a statement said. “The delegations will be in the same composition,” it added, while stressing Ukraine will “hold its ground“.

The West has ratcheted up the pressure on Russia as heavy fighting and bombardment is still centered on Ukraine’s second largest city of Kharkiv. City authorities have said a Russian cruise missile hit and destroyed the city council building – though there were no immediate reports of casualties. Feeling the pressure of the US and EU-led economic war which seeks to severely punish Moscow short of actual military intervention, the Kremlin issued a statement Wednesday saying it “hopes NATO has the good sense to avoid conflict” as reported by state-run TASS.???????

Reportedly the main police security headquarters in Kharkiv has been hit in a Russian missile strike pic.twitter.com/pX35qfZqgQ

As of Tuesday, a UN report cited at least 536 civilians killed, among these 13 children. Refugees have continued fleeing, mostly across borders leading West, with the UN’s High Commissioner for Refugees announcing that since last Thursday’s (Feb.24) start of the invasion, it’s counted 835,928 refugees who have fled. “More than half of them (453,982) fled via Poland. Another 116,348 went to Hungary, according to the UNHCR,” CNN cites a new report as saying.

Additionally the organization counted 96,000 refugees who fled into the Russian Federation from the breakaway republics Donetsk and Luhansk. This occurred between February 18 and 23rd. Though the New York Times and others have opted to label anyone escaping the fighting into Russia as “migrants” – this makes almost one million total refugees who fled the war-torn chaos by the first week’s close.

According to the latest broad update on where the bulk of the fighting is taking place, CNN describes:

Russia’s military appears to be steadily advancing on key southern cities. Russia’s Ministry of Defense said its forces now fully held Kherson, though Ukrainian authorities denied it, saying “some parts are under our control.”

Fighting also continues in nearby Mariupol, where heavy shelling left dozens injured, its mayor said. Russian troops and Russian-backed separatist have surrounded the city on three sides. The Kremlin hopes to take Mariupol to complete a land corridor that would link the Crimea, which Russia illegally annexed Crimea in 2014 from Ukraine, with southern Russia. 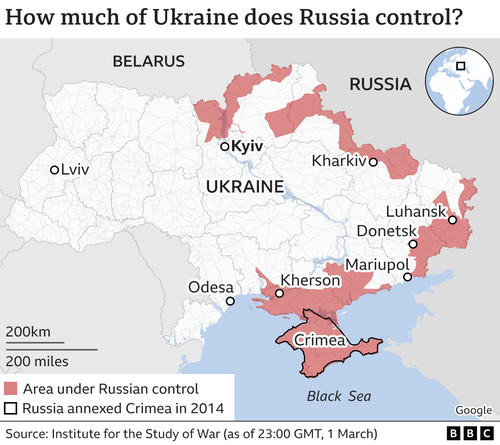 At the completion of one full week since the invasion kicked off, BBC summarizes the latest big ground-level developments as follows:

Addressing the crisis, President Biden devoted about the first 12 minutes of his State of the Union address Tuesday night to warning Russia and outlining what the US would and wouldn’t do. Importantly, he emphasized that he would not send American troops to enter conflict with Russia, but is committed to defending current NATO territory and allies.

“Throughout our history we’ve learned this lesson — when dictators do not pay a price for their aggression, they cause more chaos,” Biden said. “They keep moving. And the costs and threats to America and the world keep rising.”

Russian forces said they had captured the Black Sea port of Kherson on Wednesday as Russian and Ukrainian troops battled for Kharkiv, the country's second-biggest city, and #Ukraine's president said Moscow wanted to "erase" his country – latest
?? https://t.co/n7RrPSlFaF pic.twitter.com/1obek7jKBV

“Let me be clear. Our forces are not engaged and will not engage in the conflict with Russian forces in Ukraine. Our forces are not going to Europe to fight Ukraine, but to defend our NATO allies in the event that Putin decides to keep moving west.” He said this of additional thousands of troops recently deployed to Germany as well as NATO ‘Eastern flank’ countries.

Among the new US punitive measures unveiled in the speech included joining European countries in closing airspace to Russian flights. “Today I’m announcing that we are joining our allies and closing off the American airspace to all Russian flights,” he said. The White House has also since said that targeting oil exports is “not off the table”.

Also notable was this bizarre moment, when the president referred to Ukrainians as “Iranians”…

WATCH: Kamala corrects Biden under her breath when Biden refers to “Ukrainians” as “Iranians.” pic.twitter.com/wkXcUpRu53

It's kind of important for an American president not get these things mixed up, especially when it involves those two countries. If it had been Trump, it would've been two weeks of nonstop whining about how such ignorance is a threat to national security. https://t.co/hn2Us3qtr3

At the same time the West has continued ratcheting the economic war to further isolate and punish Russia, with on Wednesday the EU disconnecting seven Russian banks from the SWIFT international payment settlement system.

While the countries largest bank, Sberbank, has been spared from this latest action, the following major lenders were given 10 days to halt all SWIFT operations: VTB, Rossiya, Otkritie, Novikombank, Promsvyazbank, Sovcombank, and VEB.RF – according to the list confirmed in Russian media. Notably VTB is Russia’s second largest bank.

“All these banks that we have listed under SWIFT… are all [included] based on their connection to the state and the implicit connection to the war effort. We have not gone for a blanket ban across the whole banking system,” a European Union official told Reuters.