For the first time, a team of researchers from China, the US, Norway, and the UK, have spotted an eye-catching phenomenon above the North Pole, in what they’re calling a “space hurricane.”

The new study said a 600-mile-wide swirling mass of plasma “rained” electrons down on the North Pole. It was only until now that the existence of space hurricanes has been confirmed. 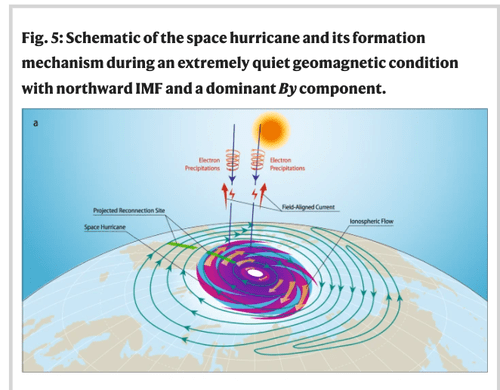 Mike Lockwood, a space scientist at the University of Reading in the UK and the co-author of the study titled “A space hurricane over the Earth’s polar ionosphere,” which was recently published in Nature, said observations made by satellites in August 2014 confirm the existence of “space hurricanes” above Earth.

Lockwood said this particular swirling mass of plasma spun counterclockwise hundreds of miles above the North Pole before eventually fizzling.

“Tropical storms are associated with huge amounts of energy, and these space hurricanes must be created by unusually large and rapid transfer of solar wind energy and charged particles into the Earth’s upper atmosphere,” Lockwood said.

Because plasma and magnetic fields are typical on planets – the researchers assume this space anomaly is more widespread than previously thought.

“Plasma and magnetic fields in the atmosphere of planets exist throughout the universe, so the findings suggest space hurricanes should be a widespread phenomenon,” Lockwood said.

Researchers still need to study the space hurricane in more depth to see if its geomagnetic activity can disrupt GPS satellites and or land-based power grids.