Hospital officials in Finland are grappling with a surge in COVID-19 cases, as the spread of new and more contagious strains spread throughout the country – including one new variant which may not show up on tests, according to the Helsinki Times.

According to Veli-Matti Ulander, the chief administrator for the Hospital District of Helsinki and Uusimaa (HUS), the number of COVID-19 patients has nearly doubled in one week – forcing the transfer of patients to other parts oft he country, as an “attempt to try to spread out the burden placed by the coronavirus on HUS,” Ulander told Finnish media. Chief HUS physician Asko Järvinen added that pressure to transfer patients comes primarily from staffing shortages.

The new strain, discovered by the Helsinki-based Vita Laboratories, is unlikely to have emerged in Finland given the country’s low rate of infection, according to the Evening Standard, however it is unclear whether it’s any more infectious – or deadly – than other strains currently in circulation.

“Vita Laboratoriot Oy and the Institute of Biotechnology at the University of Helsinki have detected a previously unknown variant of the coronavirus in a sample from southern Finland,” said the lab, which named the new strain Fin-769H. “Mutations in this variant make it difficult to detect in at least one of the WHO-recommended PCR tests. This discovery could have a significant impact on determining the spread of the disease.”

Since the mutant strain was only discovered last week, it’s unclear what impact it’s having on the country’s outbreak, though the timing is certainly curious.

“The variant was discovered in a patient last week, so details about the infectivity and potential resistance of this strain to vaccines are not yet known,” said Taru Meri, a researcher at Vita Laboratories.

Finland has bucked the trend of falling COVID cases globally. Instead, the country has seen daily numbers remain steady since the start of the new year. 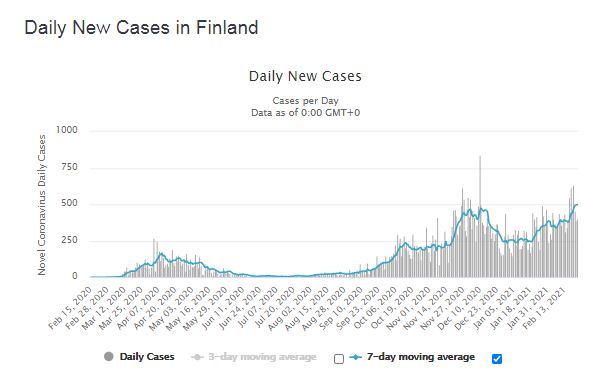 As of Thursday, 450 new cases of various COVID-19 mutations have been reported in Finland, according to THL infectious disease control head Taneli Puumalainen. Of these, nearly all were of the British variant, 22 South African and one of the Brazilian strain.

That said, virology professor at the University of Turku explained the evidence of the new strain – despite its apparent ability to evade certain PCR tests – shouldn’t prompt panic.

“I would not be hugely worried yet because we do not have clear information that this new strain would be more easily transmitted or that it would affect the immune protection brought about by already having had the virus or having received a vaccination,” said Julkunen. Meanwhile, Petri Auvinen, research director of the University of Helsinki’s Institute of Biotechnology, said the discovery of new coronavirus variants was inevitable.

Finland has had 51,595 cases and 723 deaths since the beginning of the pandemic out of a population of 5.5 million.