With Australia’s lockdown spreading to Canberra and the surrounding capital area after the discovery of just one case, the entirety of New Zealand – which supposedly eradicated COVID months ago – will now enter lockdown after the country just discovered its first case in six months.

The three day “snap” lockdown, which hasn’t exactly proven effective in Australia, where health officials recorded the worst day of new infections earlier this week even as the country’s biggest cities have been on lockdown for weeks…

The results of seven weeks of lockdown in Sydney (NSW cases) pic.twitter.com/zQCdXzNy7q

… was ordered by PM Jacinda Ardern, and marked the country’s harshest shutdown in more than a year, given the “strong possibility” that the case was caused by the delta variant.

She asked New Zealanders not to go outside for any reason unless absolutely necessary. The case was recorded in New Zealand’s most populous city, Auckland.  Because of the risk that the case is a delta case, New Zealand is justified in going “hard and fast” with a snap lockdown to try and contain the spread.

“While we know that Delta is a more dangerous enemy to combat, the same actions that overcome the virus last year can be applied to beat it again.”

Under the country’s toughest level 4 lockdown rules, schools, offices and all businesses will be shut down and only essential services will be operational. The infection also represents New Zealand’s first “community” case in six months. Additionally, vaccinations will also be suspended for 48 hours to ensure vaccines can be administered in a safe environment.

She said the lockdown was urgently needed because the world has already seen how, in Sydney, “unnecessary trips outdoors” allowed delta to slip through authorities’ grasp.

New Zealand Health Chief Executive Ashley Bloomfield said the case was a 58-year-old man who became symptomatic on Saturday. The man’s wife has been tested and since returned a negative result.

Under level 4 restrictions, New Zealanders will only be able to leave their homes for:

All must be undertaken with a mask on at all times.

Thanks to the lockdown news, the kiwi was the worst G-10 performer and slid as much to 69.07 cents while the benchmark NZ 10-year bond yield dropped as much as 10 basis points to 1.72%, the steepest decline since March. 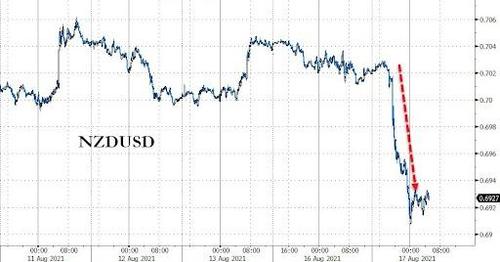 Before the lockdown, the Reserve Bank of New Zealand was expected to raise the Official Cash Rate by 25bps to 0.50%, making it the first major central bank to lift rates now that Australia’s lockdown has forced the RBA to also go on hold. But now, OIS markets are seeing the odds of an imminent hike from the RBNZ as less likely, though still high, with an 85% probability according to markets, while many research houses are cutting their forecasts to just a 25 bps hike, rather than a 50 bps hike, and some are outright pushing off the date of the hike until there is more clarity on the lockdown front.

Since the pandemic began in New Zealand, COVID has recorded 2,570 COVID-19 cases and just 26 deaths. Most countries would kill to have those numbers, but for some reason, New Zealand and Australia have decided to instead kill their economies.