Update (1400ET): The situation is becoming even more tenuous for Dr. Fauci as the day wears on. In a detailed tweet thread released this afternoon, Jeremy Redfern exposes the NIH – run by Fauci – for changing the definition of “gain of function” in the last few days as this shitstorm of reality struck.

For those that don’t know – this is how the NIH defined “gain-of-function” on their website until at least October 19th, 2021. Just 3 days ago… 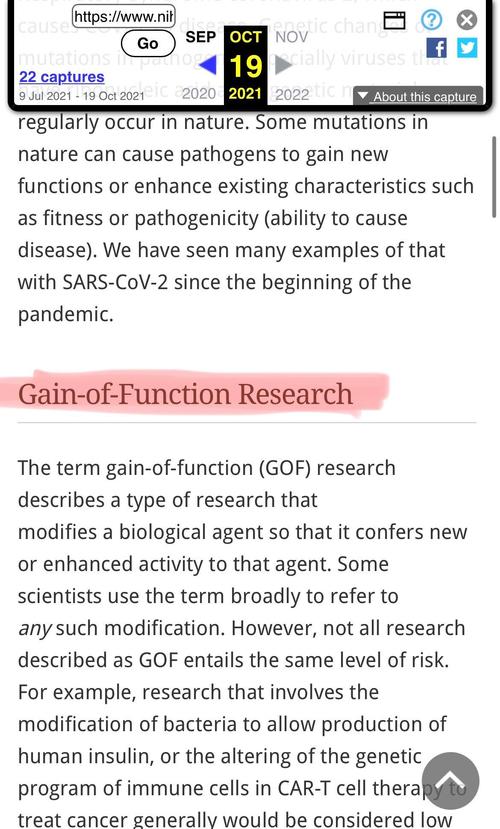 Now, it looks like this section was deleted, and the page was edited, within the last 2-3 days… 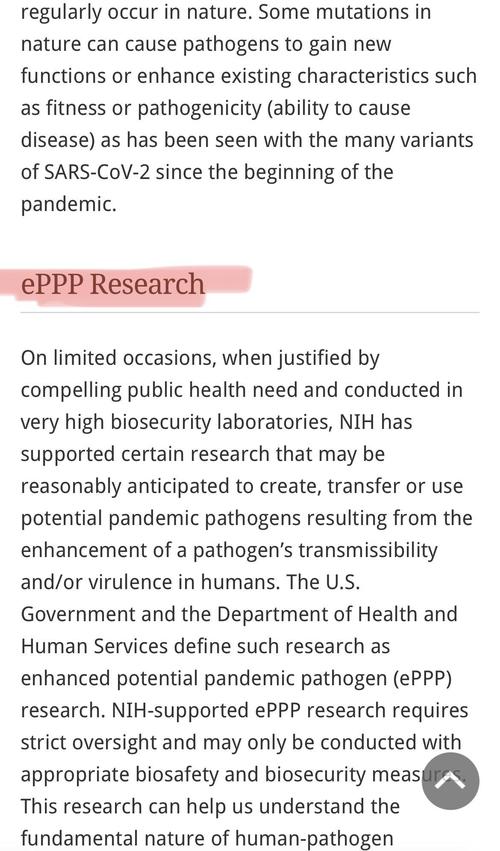 This is the problem with trying to argue with someone who can literally change the definitions of words.

Will any of these ‘omnipotent’ ‘scientists’ ever be held accountable?

As Steve Watson detailed earlier, Senator Rand Paul, who was again proven right after the National Institutes of Health admitted it did fund gain of function experiments on bat coronaviruses in Wuhan, has blasted Anthony Fauci for lying for a year and a half about research that “could destroy civilization.”

Appearing on Fox News Thursday, Paul urged that Fauci has intentionally “been parsing words” as a way of never admitting that gain of function took place in NIH funded Chinese labs.

“They still to this day are trying to get around the truth,” Paul said, adding “They say ‘well it was unexpected that it gained function’.”

The Senator continued, noting that Fauci’s “declination is this: it’s inadvertent, we didn’t know they were going to gain function. That is what a gain of function experiment is,’” Paul explained.

The Senator also noted that while he has referred Fauci to the Justice Department for investigation, Attorney General Merrick B. Garland is more concerned with targeting “moms complaining about what they are teaching in school.”

Earlier Paul had tweeted “I told you so doesn’t even begin to cover it here,” after NIH Principal Deputy Director Lawrence A. Tabak admitted in a letter to Rep. James Comer (R-KY) that a “limited experiment” was conducted to determine whether “spike proteins from naturally occurring bat coronaviruses circulating in China were capable of binding to the human ACE2 receptor in a mouse model.”

Paul also warned that the NIH is still funding the research:

Realize that NIH is still funding Ecohealth collaboration with Wuhan thru 2025.  Fauci has publicly stated his support for Continuing US taxpayer funding of Wuhan. https://t.co/Aq7n8JUst0

So, if this type of experiment created a virus that had 50% mortality (like MERS which they have experimented with in Wuhan), that result would be “unknown" before the experiment but not “unexpected.” pic.twitter.com/WmJsjSaCh1

HHS Deputy admits Fauci’s NIH funded gain-of-function research in Wuhan but says it was “an unexpected result.” If the experiment combines unknown viruses and tests their ability to infect and damage humanized cells, of course the result is ‘unknown' before the experiment.

Earlier in the year Fauci had the gall to accuse Senator Paul of being the liar:

“This is a pattern that Senator Paul has been doing now at multiple hearings, based on no reality … I have never lied, certainly not before Congress. Case closed.”

In a further interview with ABC News, Paul urged “I’ve been asking my counterparts, Democrats across the aisle, to investigate this. Not for partisan reasons, but because both sides should want to prevent another pandemic from occurring.”

“Right now we have a virus where the whole world has been turned on its head, it has a 1% mortality. Can you imagine if they create something in a lab that has a 15% mortality or 50% mortality?” Paul warned, adding “Some of the viruses they have been experimenting with in Wuhan have 50% mortality.”

The Senator added “This isn’t just about Dr. Fauci lying, this is about trying to make sure that we don’t get an even worse plague or pandemic that comes out of a lab. We do this research in our country, it needs to be looked at.”

Paul further emphasised that Fauci “is the world’s biggest supporter of gain-of-function,” and that “he should accept responsibility and immediately resign and step down from government.”

During a Department of Justice oversight hearing Thursday, Representative Andy Biggs questioned Merrick Garland about Fauci’s lies, noting that they constitute perjury, asking whether Garland would be opening an investigation.

Garland responded “Again, I’ll refer to the long standing departmental norm that we don’t comment about investigations pending or unpending, the general point that you’re making normally  would come with a referral from the relevant committee.”