Mich. Gov Gretchen Wilmer is clearly seriously uncomfortable with Michigan’s newfound status as one of the epicenter’s of the US COVID outbreak, and while colleagues like Gov. Andrew Cuomo insist on moving ahead with reopening plans, the Wolverine State is now directing residents as young as two years old to mask up.

The Michigan Department of Health and Human Services said in a press release on Friday that the state planned to expand its COVID-19 restrictions — what Michigan’s DHHS calls “the strongest public health order in the Midwest” — and require masks be worn by “children ages 2 to 4” in order to “further protect the state’s residents.”

In the press release, the state said that “expanding the mask rule to children ages 2 to 4 requires a good faith effort to ensure that these children wear masks while in gatherings at childcare facilities or camps,” the announcement says, adding that the order “follows recommendations from the American Academy of Pediatrics and Centers for Disease Control and Prevention guidance.”

State public health officials also pointed out that while several key COVID metrics have been slowing – the share of COVID patients without hospital beds, the COVID case rates and the percent positive of tests coming back positive (although the speed of the declines has slowed somewhat) – the head of one of the state’s biggest nursing organizations warned that “Nurses are exhausted. Many hospitals are close to 100% capacity. RNs around the state are being put in the impossible situation of having to decide which patient to attend to. Nurses are working up to 18 hours at a time, often without breaks,” said Jamie Brown, president of the Michigan Nurses Association.

“We are begging for everyone in the community to do their part. Stay home. Wear a mask. Get a vaccine when you are able. We are barely able to keep our heads above water. We are in crisis. We need our communities’ help.”

While cases have climbed back in Michigan (driven in part – according to the press release – by variants like B.1.1.7) deaths have crept higher, but only slightly. 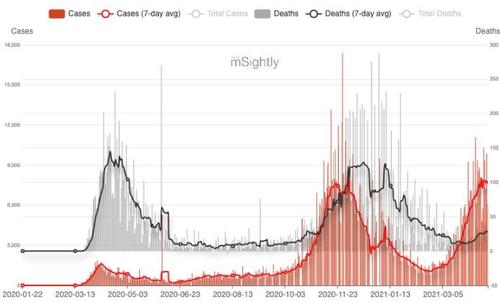 The order in its current form is set to last through May 24. As Michigander parents scramble to mask their rambunctious toddlers, Dr. Marc Siegel took to Fox News over the weekend to remind the world that there’s “no medical science” behind the order to mask two-year-olds.

“There’s no advantage, no medical science behind it…children as young as two are very unlikely to be spreading the virus,” Dr. Siegel said.

After passing 200MM vaccine doses administered last week, more than half of US adults have now received at least one dose of the vaccine. While the percentage who are fully vaccinated sits just below 35%.