Abnormally dry to exceptional drought conditions are expected to persist across 60% of the continental U.S. as spring in the Northern Hemisphere begins. Forecasters expect little to no rain for certain parts of the western U.S. through June.

From April to June, above-average temperatures are expected from Southwest to the East Coast and north through the Midwest, according to a new outlook published by the National Oceanic and Atmospheric Administration (NOAA).

NOAA’s map shows a greater than 50% chance of drought persistence for nearly 60% of the continental U.S. 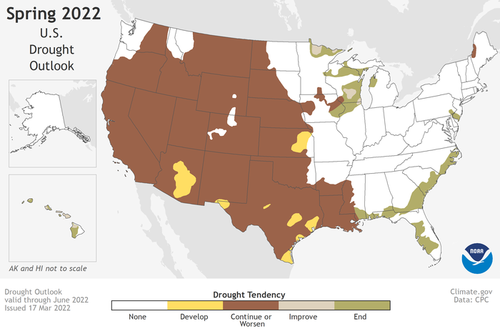 “Severe to exceptional drought has persisted in some areas of the West since the summer of 2020, and drought has expanded to the southern Plains and Lower Mississippi Valley,” said Jon Gottschalck, chief, Operational Prediction Branch, NOAA’s Climate Prediction Center.

“With nearly 60% of the continental U.S. experiencing minor to exceptional drought conditions, this is the largest drought coverage we’ve seen in the U.S. since 2013,” Gottschalck said.

The outlook also noted more than 50% of the U.S. will experience above-average temperatures this spring, with the greatest chances in the Southern Rockies and Southern Plains.

According to the U.S. Drought Monitor, at least 90% of nine western states are plagued with dry conditions, including all of California, Nevada, and Utah, and 99% of New Mexico. 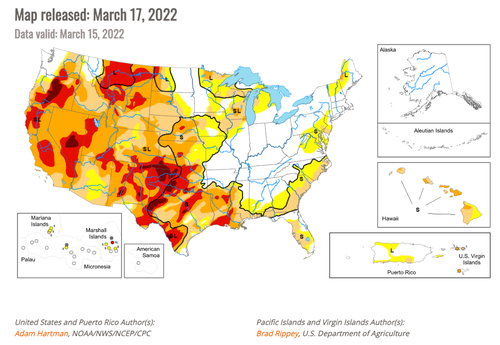 NOAA’s latest forecast doesn’t bode well for the western U.S. farm industry as it could very well suggest the multiyear mega-drought (one of the worst in 1,200 years) could begin to impact the U.S. food supply and comes at a very inopportune time as the Russian invasion of Ukraine has choked the world of natural resources.

The U.S. and world are careening towards a food crisis. Perhaps it’s time to plant a garden and become independent as national and global food supply chains may begin to breakdown.