“Not at All Funny”: Rattled Liberals “Terrified” of Elon Musk’s Big Stake in Twitter

Elon Musk’s 9.2% stake in Twitter and his newly announced board seat has sent the left into an anti-free-speech tailspin.

Musk has been an outspoken proponent of free speech – which he says that failing to adhere to “fundamentally undermines democracy.”

The consequences of this poll will be important. Please vote carefully.

“There’s interest in billionaires, there’s celebration of the Musk. There’s also fear, I think, sometimes or wariness of- okay, so here’s the richest man on the planet who just bought a big chunk of one of our most important communications tools,” said Stelter. “”He’s also one of the biggest owners of satellites in the world. So he’s incredibly powerful, incredibly, I don’t know, am I allowed to use the word strange when talking about Elon Musk?”

Except, billionaires have been controlling information for decades and nobody had a problem.

Bring back the good and benevolent oligarchs to police the internet and our political debates for us. Google loves us and knows what is best for us, not like this irreverent ruffian. https://t.co/nnwCB7DaJo

Coping is not going well for the anti-free-speech crowd.

Cassie Nick Rumbaugh, a data scientist at Twitter, is among the employees and contractors very upset that @elonmusk is now the largest stakeholder in Twitter.

"A prominent transphobe buying a large stake in Twitter is not at all funny," she says. pic.twitter.com/gFSy52YsTZ

And it’s no wonder why the left is rattled – according to Statista, their biggest problem with Twitter is ‘inaccurate or misleading information,’ while they’re least concerned about ‘Twitter banning users.’ 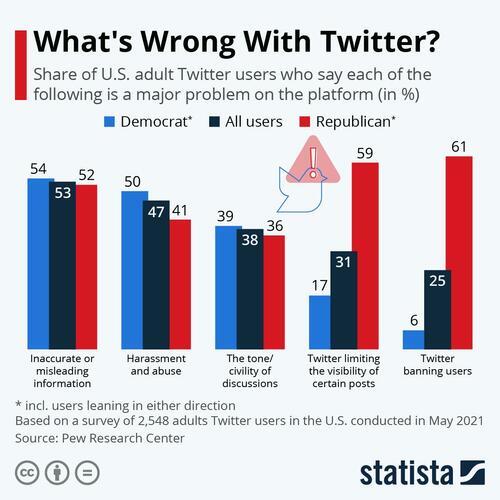 There's no need to wonder what the US liberal-left thinks about free speech. Polling data proves: they don't believe in it.

Huge majorities want not only tech oligarchs *but also the state* to censor the internet for them. Can't argue with the data. It's right here: pic.twitter.com/ulJml3MP5s

lol its funny because its truehttps://t.co/mCf9iViHIV

Elon Musk is totally unfit to run Twitter! He might not spend every waking hour thinking of new ways to control, monitor, and ban speech

"And I still dislike him [Elon Musk]."

Haraldur Thorleifsson, who directs creative services for Twitter, states his dislike for @elonmusk after the billionaire became the company's largest stakeholder. pic.twitter.com/lvSSdlTtmY

It appears the wokerati are more than happy to allow ‘free speech’ when it’s their speech but when ‘free speech’ is contemplated for all speech (even the evil ‘others’), tolerance goes out the window and tantrums dominate (until they get their way). Perhaps the real driver of this ‘fear’ of Elon goes back to his comments (paraphrased) that “wokeness… basically gives mean people a shield to be mean and cruel, armored in false virtue.”

Imagine the cognitive dissonance sweeping the nation as that reality soaks in (like there’s no need to wear a mask in a car when you’re alone).