Facing nearly a dozen separate “Freedom Convoy”-inspired protests that seemed to be springing up faster than police and his government could disperse them, Canadian Prime Minister Justin Trudeau invoked a national emergency to implement sweeping police powers late Monday.

Yet, protesters and their supporters continued, as protesters in Ottawa “dug in”, while new demonstrations sprung up in Alberta and Manitoba, but by Tuesday, Trudeau and his government had clearly had enough. They needed a new scapegoat. Enter, 13 “demonstrators” who were arrested purportedly due to their involvement with the Coutts blockade. Police claimed they seized “13 long guns and a large quantity of ammunition in an early-morning raid targeting three trailers that were part of a blockade”.

Canada’s Public Safety Minister, Marco Mendicino said as much during a press briefing on Tuesday.

“There have been those who have tried to characterize these illegal blockades [as being] about vaccines and mandates and fatigue with the pandemic. That is not what is driving this movement right now,” Marco Mendicino, Canada’s Public Safety Minister, said at a news conference Tuesday.

“What is driving this movement is a very small, organized group that is driven by an ideology to overthrow the government through whatever means they may wish to use,” he said.

In what sounded like the preamble to another “Alex Jones” moment, some “national security experts” have asked the Canadian government to provide more “clarification.”

Just remember that the “threat of violence” is integral to Trudeau’s argument for his national emergency order.

The official order published Tuesday by the Canadian government lays out the justification for invoking extraordinary measures under the Emergencies Act, and what specific powers it will be using. The order said the government would, among other things, ban protests that police believe would lead to unlawful activity, prohibit gatherings near critical infrastructure such as border crossings, and allow authorities to commandeer tow trucks to help police remove demonstrators’ vehicles.

The order said the protests in downtown Ottawa and at border crossings constitute a public-order emergency because of the threat of violence and unrest, and the disruption caused to the supply-chain network and two-way trade with the U.S.

These passages likely read as comical to anybody who was in attendance in Ottawa this weekend. But as protesters reportedly dig in, daring the Canadian government to try and break up each action individually, while new ones continuously re-emerge, sounds like a frustrating game of whack-a-mole, or a novel and convincing grass roots movement with a handful of easily communicable demands.

In reality, what appears to have happened in Coutts couldn’t be more different from this portrayal. Only a few dozen protesters remaind and were dutifully detained by police during a pre-dawn raid which we chronicled over the weekend. But sure, inform us again how this transnational movement is really the work of a handful of deranged anarchists and white supremacists. 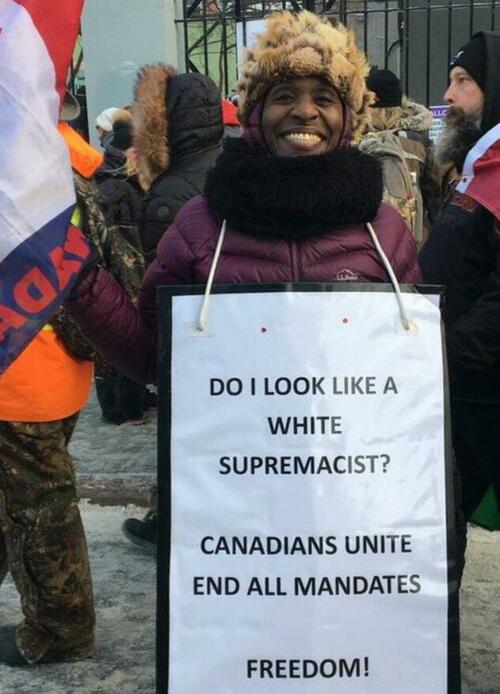 The notion that the hundreds of thousands of people who have financially contributed to, or directly participated in, the protests might be anarchists seeking to “overthrow the government” still seems ludicrous on its face. Chris Barber, an organizer for the main group behind the protests, said removing the vaccine mandates remained the movement’s primary goal: “All we want is the Covid vaccine mandates removed,” Chris Barber said. “There’s never been a case for trying to overthrow the government.”

And there’s never really been a case to link ‘the movement’ with the actions of a handful of its least-well-behaved participants. Remember what they said when certain journalists and news outlets made those same “connections” about BLM?