While the labor picture in America has greatly improved since the American Rescue Plan was passed in March, over seven million people will lose unemployment benefits today after the expiration of federal programs meant to bolster the economy during the pandemic (and which disincentivized millions from seeking work while inflation seeped into just about every facet of life).

As we noted last week, when the ARP was passed, extending pandemic-related unemployment until today, nearly 14 million Americans depended on the programs, while job openings continued to soar. 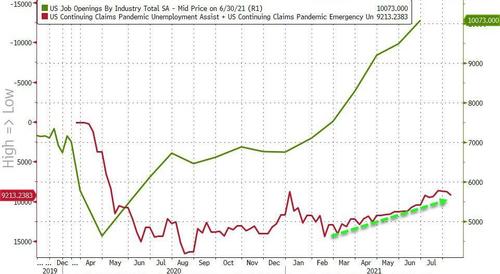 According to the Century Foundation, 7.5 million workers receiving two federal unemployment assistance programs will be cut off from aid, Axios reports. Additionally, nearly 3 million people will lose a $300 weekly boost to their state unemployment benefits.

Overall, the US Department of Labor reported last week that 12.19 million Americans still received unemployment benefits in the week ended August 14. As we reported at the time, while the number of people receiving help through regular state programs has fallen to 2.8 million, from a peak of more than 22 million in May 2020, more than 9 million Americans still relied on aid provided through either of the two aforementioned programs, as many who lost their job during the first wave of the pandemic have exhausted their regular unemployment insurance benefits or never qualified in the first place. 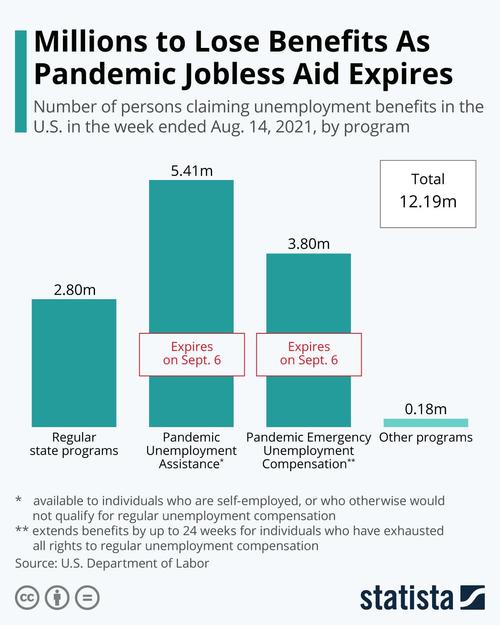 According to the US Treasury, the US government has spent over $830 billion of taxpayer funds on unemployment insurance between the beginning of the pandemic through Sept. 1.

Bloomberg on Sunday noted that jobless Americans aren’t only hurting, they’re ‘stranded in a bureaucratic nightmare, still waiting for benefits they are owed.’

Laura Ulrich, 59, was laid off in January from her job managing the distribution of coins in the Baltimore area for an armored car company. She spent the past week hoping that a summer of contacting officials in Maryland was going to bear fruit and more than $14,000 in unemployment insurance would finally land.

On Saturday, after Bloomberg News raised her case with the office of Maryland Governor Larry Hogan, $11,200 finally landed in her bank account.

Ulrich’s happy moment came after months of frustrating encounters with a vital but occasionally cruel pillar of the economic safety net, experiences shared by many of the 8.4 million Americans who remained unemployed in August. Their ordeal highlights how the debate over whether supplemental benefits have kept people home and held back the job-market recovery often misses just how difficult securing aid in the first place can be for applicants.

In a nutshell – state agencies which handle payments are overwhelmed, and suffer from ‘antiquated systems and a chronic lack of staffing,” according to Bloomberg. A flood of new recipients during the pandemic, along with massive allegations of fraud, caused states to freeze numerous claims – including Ulrich’s.

According to the Department of Labor, just 58% of claims resulted in a first payment within the required 21-day period YTD through June 30. Since then, “I’m not seeing a lot of states meeting that benchmark yet,” according to senior Labor Department adviser, Michele Evermore.

In Florida, meanwhile, 58,000 accounts were frozen during a summer data breach. As of Sept. 1, there was still a backlog of 47,288 claims. In Maryland, just 41% of claims were paid within the mandated 21-day period.

The Unemployed Workers Union, the group leading the lawsuit, has collected more than 5,000 complaints from people caught in the backlog, according to Sharon Black, one of the organizers. A spokesman for Governor Hogan, Michael Ricci, said 20,795 unemployment claims were still “pending” as of this week. He blamed delays on the state’s strict procedures to verify applications.

In Georgia, the median age of appeals filed by claimants was 322 days, or more than 11 months, at the end of June, according to researchers at the Southern Poverty Law Center. The state Department of Labor is working seven days a week processing appeals, but it will likely take months to clear the backlog, said spokeswoman Kersha Cartwright. -Bloomberg

Ulrich, frustrated from months of no traction from Maryland, started sending them emails.

“What is the update? I will kill myself and make it very public. I want my earned money now!” Ulrich emailed July 1.

“Why am I not able to get a response or my monies due me?” she said July 20. “I hope no one you know is forced into poverty by their government.”

What’s more, states are now re-examining unemployment claims approved early into the pandemic, and are reversing decisions – including sending out bills to people for “overpayments” – a bureaucratic mess that will take at least a year to clear out nationally, according to Century Foundation senior fellow Andrew Stettner, who likened the situation to an assembly line.

“If you put too many things on it, the whole thing breaks.”

And so, while millions of Americans are losing their unemployment benefits today, an untold number are still waiting for states to process them.