Update (1730ET): The White House Press Secretary’s office has released a lengthy statement setting out the reasons for pardoning Gen. Flynn. The statement read that Flynn shouldn’t require a pardon because “he is an innocent man”. 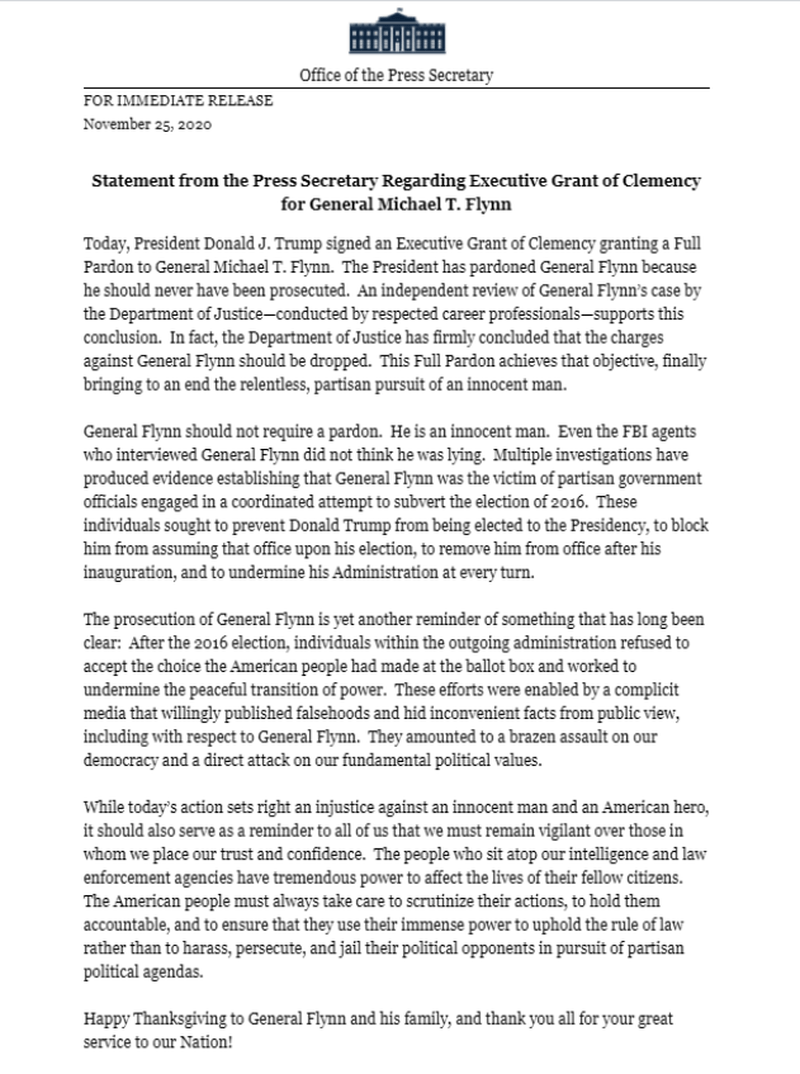 In reality, Flynn was the victim of a highly partisan campaign orchestrated by critics of the president within the FBI and the intelligence community, the WH added, while accusing the “complicit” media of perverting the facts and attacking the underpinnings of the Amerian system all because they couldn’t accept the fact that Trump won the 2016 race.

The MSM, meanwhile, is already trying to make Flynn’s pardon an “issue” for the Jan. 5 runoff Senate races in Georgia.

Sens. Loeffler and Perdue should be asked about Trump's pardon of Michael Flynn before their Georgia runoffs.

Then again, the media already has plenty of fodder for those races.

Just minutes before the market closed on the day before Thanksgiving (typically one of the slowest, lowest-volume days of the year) John Solomon reported that President Trump has pardoned Michael Flynn, the man who briefly served as his national security advisor before being taken down (and then charged and convicted of lying to investigators) in an effort that some have described as a deep state-backed setup.

Trump just confirmed the initial reports, published minutes ago by John Solomon and Just the News, and tweeted that: “It is my Great Honor to announce that retired Lieutenant General Michael T. Flynn has been granted a Full Pardon,” Trump tweeted. “Congratulations to @GenFlynn and his wonderful family, I know you will now have a truly fantastic Thanksgiving!”.

Flynn was granted a full pardon by the president, who also commuted the sentence of former advisor Roger Stone back in July.

It is my Great Honor to announce that General Michael T. Flynn has been granted a Full Pardon. Congratulations to @GenFlynn and his wonderful family, I know you will now have a truly fantastic Thanksgiving!

As the AP explains, Trump’s pardon effectively voids the criminal case against Flynn just as a federal judge was weighing, skeptically, whether to grant a Justice Department request to dismiss the prosecution despite Flynn’s own guilty plea to lying to the FBI about his Russia contacts.

Already, Trump’s partisan opponents – including House Intelligence Committee head Adam Schiff, a longtime Trump critic – are lashing out at the president over the decision.

“Well, it would send a message that at least as far as President Trump is concerned, if you lie on his behalf, if you cover up for him, he will reward you, he will protect you, but only if he thinks it’s in his interest.”

“There are others that lied for him that he’s not going to extend that kind of service to,” Schiff added. “But it just frankly reflects so ill on our democracy, on the United States. Imagine what people around the world think when we have a president who’s acting like an organized crime figure,” Schiff added.

Jerry Nadler, the New York Democrat and chairman of the House Judiciary Committee, also bashed Trump for the decision, which was hardly a surprise: Trump has been saying for months that a pardon for Flynn was likely.

Chairman Nadler Statement on the Pardon of Michael Flynn pic.twitter.com/8wO4JMgIzA

It’s a safe bet that somebody – probably James Comey – will compare Trump to a mafia boss, especially since Flynn’s pardon follows Trump’s rant during a hearing in PA today where Trump egged on Rudy Giuliani and the others who are trying to overturn PA’s presidential election result. A judge handed them a major court victory earlier.

Though Flynn pleaded guilty three years ago, his sentencing hadn’t yet been handed down as his legal team worked to dismiss the case, something that has become a cause celebre among conservatives.

Flynn initially pleaded guilty to charges of lying to investigators that were related to his conversations with a Russian diplomat. He was the second Trump ‘associate’ convicted in the Mueller probe, according to the AP, and the only White House official to be convicted during the nearly two-year investigation (for more background, see the tweet below).

Nov 1 2017: @GenFlynn attorney ask from Mueller documents that if handed over could help Flynn against a claim that he lied.

Nov 3: Mueller Thugs leak that they may charge Flynn’s son.

Flynn’s original FD-302 is so important, the Special Counsel had to leak a prosecution threat against Flynn’s son just to avoid turning it over to his original lawyers Covington

Wed Nov 1, 2017: Flynn’s original lawyers Covington ask for a copy of his FD-302: “We don’t think he has committed a felony offense”

Flynn hasnt pled guilty to anything at this point. His lawyers are adamant he’s *innocent*. And the SCO won’t even turn over the edited FD-302, never mind the original one, for them to look at

The SCO claimed they couldn’t turn over the FD-302 because it would “reveal” parts of their overall Russia interference investigation. But even the edited version of the Jan 24, 2017 interview shows Flynn wasn’t asked about Russian interference or anything remotely like Collusion

And that investigation of Flynn should never have been opened in the first place, given its laughably weak predicate lacking any articulable factual basis for believing he could have been colluding or conspiring with Russia

The general was fired just weeks after being confirmed as Trump’s first national security advisor after it came to light that he had lied about conversations Flynn had in December 2016 with the then-Russian ambassador Sergey Kislyak.

Flynn reportedly urged Moscow not to escalate in response to sanctions imposed by the departing Obama administration over allegations that Russia interfered to try and hand Trump the election.

Responding to news of the pardon, Jonathan Turley (author of the essay hyperlinked above), said “The idea of Trump pardoning a former aide still sits badly with me. However, so does the conduct of his judge and the refusal to end this saga.”

While Sidney Powell battles on in her legal effort to overturn election results in several states, some pointed out that Flynn’s pardon is a ‘win’ for her.

NEWS: Sidney Powell tells me that President Trump informed her today he has pardoned Lt. Gen. Flynn. No confirmation yet from the White House or Trump administration.

At a hearing for the Flynn case in September, Powell told the judge that she had discussed the case with President Trump but also said she did not want a pardon (presumably because she wanted Flynn to be vindicated on the merits).

The DoJ said it wasn’t consulted by President Trump ahead of the pardon, but the department approves of the decision nonetheless.

Though it wasn’t the ‘kraken’ we had come to expect from Powell, for conservatives, it’s a pleasant reminder that – for now at least – Trump is still president.

To be sure, while Flynn might be the first and possibly most high-profile individual pardoned since Election Day, he likely won’t be the last: word around Washington is that Trump could pardon Edward Snowden as a kind of last-minute middle finger to the ‘Deep State’.

This year pardon Julian Assange and Edward Snowden instead. https://t.co/dWHN4wo21S