Cities across Russia appear to be heading into lockdown again, despite the Sputnik V vaccine having been the world’s first to have rolled out last year, and with at this point an estimated one-third of the population being fully vaccinated. Yet this week has witnessed new daily record highs as confirmed coronavirus cases surge once again.

Tuesday witnessed the highest single-day death toll thus far in the pandemic, with 1,038 deaths from the virus recorded, according to the AP. President Vladimir Putin announced on Wednesday an almost unprecedented order for all workers across the nation to stay home for one week. In some hard-hit cities, the mandate could reach up to two weeks. However, authorities have stopped short of imposing a full-fledged national lockdown.

The work stoppage plan was initially proposed by Putin’s Cabinet – which the president is now backing – to take effect October 30, and going through the first week of November.

“Our task today is to protect life and health of our citizens and minimize the consequences of the dangerous infection,” Putin said in a video call with officials Wednesday, The Associated Press reported.

“To achieve that, it’s necessary to first of all slow the pace of contagion and mobilize additional reserves of the health care system, which is currently working under a high strain,” he added.

Putin further expressed frustrations with the course the pandemic is taking, after the vaccine has long been available to all seeking it: “I can’t understand what’s going on,” he said. “We have a reliable and efficient vaccine. The vaccine really reduces the risks of illness, grave complications and death.”

“There are only two ways to get over this period — to get sick or to receive a vaccine,” Putin said. “It’s better to get the vaccine, why wait for the illness and its grave consequences? Please be responsible and take the necessary measures to protect yourself, your health and your close ones.” 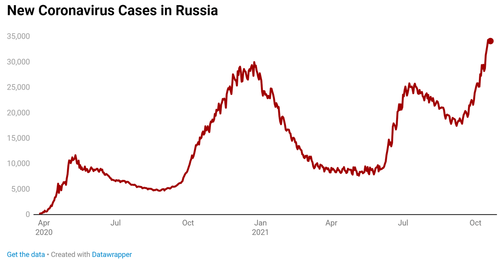 Reports estimate that about 45 million Russians are fully vaccinated, which constitutes 32% of the total population of 146 million. According to France24, there continues to be widespread hesitancy based on “mixed signals” from government authorities, akin to the kind of confusion and contradictory messaging seen in the United States and other parts of the globe:

Even though Russia in August 2020 became the first country of the world to authorize a coronavirus vaccine and vaccines are plentiful, Russians have shown hesitancy about getting the shots, a skepticism blamed on conflicting signals sent by authorities.

While extolling Sputnik V and three other domestic vaccines, state-controlled media were often critical of Western-made shots, a controversial message that many saw as feeding public doubts about vaccines in general.

Below are some further details on the recent Covid developments in Russia, via The Moscow Times:

While Putin’s nationwide one week work furlough is being described as an “order” – it’s unclear to what degree it will be legally enforced, or met with penalties should some offices and companies stay open for their workforce.