Peter Daszak, the guy who landed a lucrative NIH contract to study bat COVID in Wuhan four months before the Obama administration banned gain-of-function research on US soil, has penned yet another screed in The Lancet in an obvious attempt to put a ‘science’ bow on the natural origin theory, while once again dismissing the possibility of a lab-leak.

Recall Daszak was behind a now-infamous February 2020 Lancet letter signed by 27 authors – many of whom have since distanced themselves or retracted – which claims COVID-19 could have only evolved in nature, and that the lab-leak hypothesis was virtually impossible. Daszak has since ‘recused’ himself from the Lancet‘s COVID-19 commission due to his overwhelming conflict of interest, but has still been provided a platform to reiterate his defense.

“We believe the strongest clue from new, credible, and peer-reviewed evidence in the scientific literature is that the virus evolved in nature, while suggestions of a laboratory-leak source of the pandemic remain without scientifically validated evidence that directly supports it in peer-reviewed scientific journals,” Daszak writes. 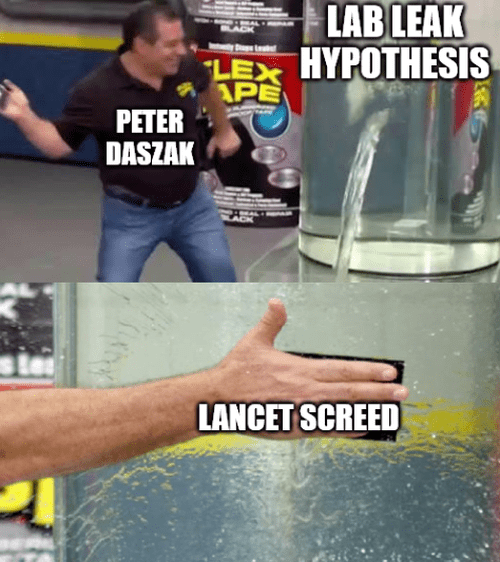 He also claims that his own compensation is “paid solely in the form of a salary from EcoHealth Alliance,” his nonprofit which received the NIH contract (among tens of millions received from the US Government), and that he, nor EcoHealth, have never received funding from the People’s Republic of China – a lie you’ll read about below.

Nothing to see here – just a regular guy genetically engineering a few bat coronaviruses to check out how they can enter cells – which Daszak says the NIH reviewed and determined didn’t warrant oversight by its Potential Pandemic Pathogen Care and Oversight (P3CO) committee – which, as the Daily Caller noted in April, was shielded from review.

The new Lancet letter by Daszak and Co can only be read as an apology.

The title "We apologize: Science, not speculation, is essential to determine how SARS-CoV-2 reached humans" was probably too long and had to be shortened, but the intent is clear. https://t.co/9Fu9YsVvMx

First, the group that "joined together"in Feb contained three more people: Peter Palese, Bernard Roizman, William Karesh. Their abesnce is not addressed, but given the outspoken retractions issued by the first two, we might have some suspicions. https://t.co/bfJLpf4UiA

Second, the intent of the letter was not to “express solidarity with our professional colleagues in China”. The thrust of that letter was the following statement: “We stand together to strongly condemn conspiracy theories suggesting that COVID-19 does not have a natural origin.”

As such, it is puzzling that when they do discuss the original letter, the only thing they reaffirm is the solidarity that nobody asked about: “The answer is clear: we reaffirm our expression of solidarity with those in China who confronted the outbreak…”

It gets better though: “The second intent of our original Correspondence was to express our working view that SARS-CoV-2 most likely originated in nature and not in a laboratory”. It’s worth wondering why an expression of solidarity had to be paired with a “working view”.

In that paragraph, they chide themselves for getting ahead of the scientific method: “Opinions, however, are neither data nor conclusions. Evidence obtained using the scientific method must inform our understanding and be the basis for interpretation of the available information”

“We believe the strongest clue from new, credible, and peer-reviewed evidence in the scientific literature is that the virus evolved in nature”. This is the only new claim, but clearly this whole letter could not have been a way to do a literature review.

If it was, leaving out the many “new, credible, and peer-reviewed evidence in the scientific literature” should have gotten this paper thrown out in said peer review. In addition, contradictory statements from the first signatory, as well as one other, deepen public confusion.

Charles Calisher, first signatory in this letter, told ABC that “there is too much coincidence” and “it is more likely that it came out of a lab”. Which is it?

Stanley Perlman told the Washington Post that “On both sides, there’s really a lack of information. That’s why we have such extensive discussions and, in some cases, vituperative discussions. There’s really no data. It’s really just opinions.” Which is it?

“Allegations and conjecture are of no help, as they do not facilitate access to information and objective assessment of the pathway from a bat virus to a human pathogen that might help to prevent a future pandemic.” – This is clearly self-criticism for publishing a “working view”

Sadly, this is out of place in an apology: "Having robust surveillance and detection systems in place across the globe is essential to detect and report new or evolving pathogens". Three signatories are in the leadership team of such a "detection system" https://t.co/j7EPBssWjd

Finally, we get to the statement of conflicts. It is a shameful piece of text that is clearly not intended to be read. This is not how honorable people write. Here's what it looks like: pic.twitter.com/qSMszH2EFh

In addition, it does not mention that 1 in every 4 signatories is affiliated with EcoHealth Alliance, which admits to having funded implicated work at Wuhan Institute of Virology:

Interestingly, the editor of the Lancet, Richard Horton, has interestingly gone back on his own statement, when he rejected a pro-lab-leak statement of experts, that they "had decided to let this go". It seems the statement holds for some but not others. https://t.co/WQ9xOkTaxA

In any case, other than highlighting for the whole world how a small cabal of deeply conflicted experts pretended that scientific consensus had been reached in 25 days, it is unclear what they point of this statement is, unless to muddle the waters further. It’s too late.