“Tens of Thousands” Received China Mystery Seeds in the Mail, and Many People Planted Them

Last month we highlighted a mysterious trend that was sweeping the U.S.: citizens were receiving unsolicited packages of seeds, with return addresses from China, for apparently no reason at all.

Official word from various government agencies, including the USDA, was to not plant the seeds and instead alert their local authorities. But plant the seeds is exactly what many people did, according to a new follow up report from Vice. They found that hundreds, if not thousands of people planted the seeds. 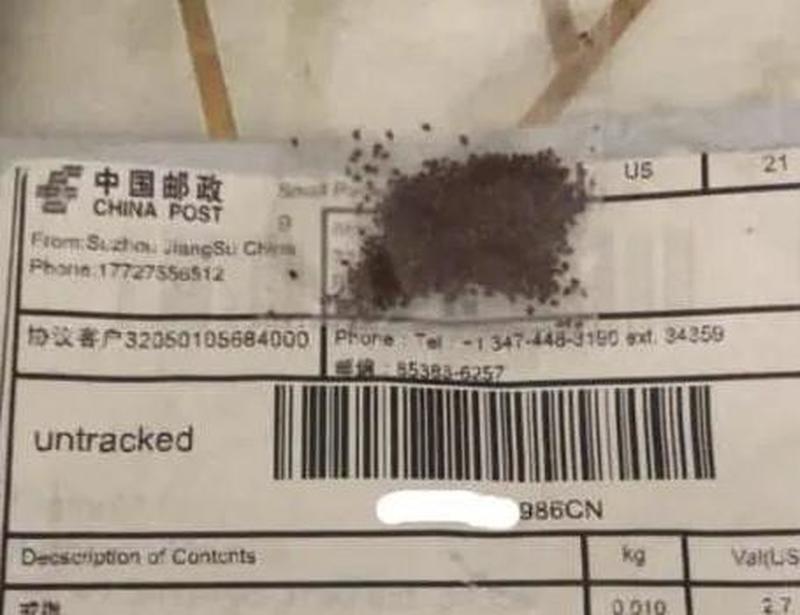 Vice filed 52 FOIA requests to obtain the information and pored through “thousands of pages” of e-mails, spreadsheets and documents to try and figure out what, exactly, what going on. They estimate from their finding that “tens of thousands” of Americans received these seeds.

States like North Carolina had more than 1,000 people contact its Department of Agriculture about the problem. About 60 people in the state planted the seeds.

One New Mexico resident left a voicemail to her local state Department of Agriculture that said: “About a month ago, I did receive seeds from China. I guess China because it looks like Chinese writing. I thought, ‘Oh cool, maybe Burgess seeds or one of the seed companies sent me some seeds.’ And, umm, like a dumbass, I planted them, not knowing there was a problem.”

One report from North Carolina said: “Received many shipments. Planted some and clover came up. She indicated that she planted the bulbs. Planted one pack and ate the oregano that grew. Has some left.”

A New Hampshire resident said: “I received this package from China. Unfortunately I through the envelope away. It said they were stud earrings. I had ordered onions from amazon and thought they got them from China. The more I looked at them they don’t even come close to onions I just figured they sent the wrong thing. No I didn’t plant or open the package. What should I do with them.”

A spokesman for the USDA’s Smuggling Interdiction and Trade Compliance said complaints were “starting to explode”.

“Look’s like it’s all across the country,” stated an Indiana resident who also received seeds in the mail unsolicited.

We had followed up on the initial report of these seeds last month, noting that the U.S. had started to identify “14 types of plants” that the seeds belonged to, revealing a “mix of ornamental, fruit and vegetable, herb and weed species,” according to the NY Times. Cabbage, hibiscus, lavender, mint, morning glory, mustard, rose, rosemary and sage have all been identified.

The Vice report confirmed that some of the seeds were found to be “noxious weeds” that exist in huge numbers in the U.S., such as oxeye daisy, and hedge bindweed.

Osama El-Lissy of the U.S. Department of Agriculture Animal and Plant Health Inspection Service said: “This is just a subset of the samples we’ve collected so far.”

Art Gover, a plant science researcher at Penn State University had previously the “risk is low” of the plants being involved in biological warfare, but that the seeds “can be troublesome because they can introduce problematic weeds and diseases”.

Lisa Delissio, a professor of biology at Salem State University in Massachusetts, said: “If any of the unidentified seeds turned out to be invasive species, they could displace native plants and compete for resources and cause harm to the environment, agriculture or human health.”

Bernd Blossey, a professor in the department of natural resources at Cornell University commented: “Obviously planting rosemary or thyme in your garden isn’t something that will endanger our environment. But there may be other things in there that have not been identified yet. Any time you gain something unknown, my suggestion is burning them, not even throwing them in the trash.”

In our initial report on the seeds, we suggested the mailings could be some sort of agricultural warfare brewing between the U.S. and China – where agriculture remains a key point of trade tensions – and where a cold war of sorts appears to be bubbling up under the surface.

After multiple reports in the U.S. media regarding the seeds, China’s Foreign Ministry responded last month by saying that China Post (the country’s state owned mail service) “has strictly followed regulations that ban the sending and receiving of seeds,” according to Bloomberg.

Further, Chinese Foreign Ministry spokesman Wang Wenbin says that the parcels were “forged” and “not from China”. China has supposedly requested that the U.S. mail the seeds back to China so they could investigate further.

We noted last month that the response is anything but re-assuring. We’re not postmaster generals but we find the idea of being able to forge mailing labels – and get products to their final destination – in this day and age where even the decrepit U.S. postal service is mostly digital, as a difficult one.

Amazon has also since said it is banning the sale of seeds on its platform.

Anyone who has received seeds in the mail can report them to the United States Department of Agriculture by visiting their website here. The site says:

If individuals are aware of the potential smuggling of prohibited exotic fruits, vegetables, or meat products into or through the USA, they can help APHIS by contacting the confidential Antismuggling Hotline number at 800-877-3835 or by sending an Email to SITC.Mail@aphis.usda.gov.

USDA will make every attempt to protect the confidentiality of any information sources during an investigation within the extent of the law.