Update (1700ET): Shortly after Gov. Abbott’s decision to follow the science and allow the people of his state to be ‘free’ to judge their own risks once again, none other than California Gov. Newsom – desperate to virtue-signal as he fights for political survival amid an imminent recall vote – had a two word response: “Absolutely reckless.”

We have two words for Mr. Newsom… can you guess?

For 30 million Texans, the lockdown nightmare is over, at least for now.

With the CDC still scrambling to find any pretext to extend draconian lockdown measures and the new CDC director explicitly urging states not to relax restrictions, on Tuesday Texas Governor Greg Abbott defied the organization whose politicization has become a stamp of humiliation, and announced that the second-largest US state will lift the mask mandate and all other anti-pandemic restrictions amid declining hospitalizations and infection rates.

Effective March 10, all businesses will be allowed to open at 100% of capacity, Abbott said during a media briefing in Lubbock on Tuesday. His executive order allows county judges to reinstate anti-virus rules should hospitalizations surge.

“Too many Texans have been sidelined from employment opportunities; too many small-business owners have struggled to pay their bills,” the Republican governor said. “It is now time to open Texas 100%.”

Abbott’s anti-pandemic measures had drawn the ire of his conservative electoral base, which saw them as government overreach, and may have crushed any presidential aspirations he harbored. Indeed, Abbott received 0% of the vote in a presidential straw poll at the Conservative Political Action Conference this past weekend according to Bloomberg.

Meanwhile, new Covid-19 cases in Texas dropped to a five-month low of 1,637 on Monday, state health department figures showed, while virus hospitalizations slipped to the smallest tally since Oct. 28. This comes as Texas is administering more than 1 million Covid-19 vaccinations weekly, according to Abbott.

And while Texans can rejoice for now that they are the only state where freedom has returned, it’s only a matter of time before the infamous circular covid chart kicks in… 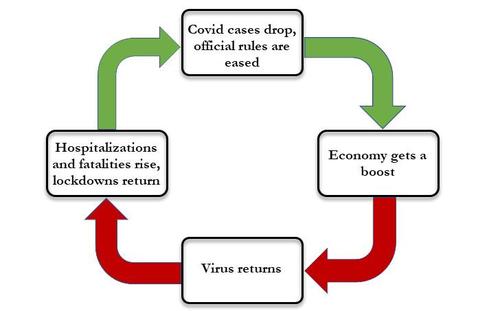 … and the spike in new cases (as determined by PCR and various government proxies no doubt) resulting as a consequence of this current easing of restrictions, forces the state to lockdown yet again.