There’s been an increasing number of incidents between law enforcement and antsy Americans eager to get back outdoors after being sick of ‘stay at home’ and state-wide lockdown measures. But often individuals’ desire for a rapid return to normal is butting up against continuing social distance measures still in place in most states, even those already opening up their economies.

A viral video showed one such recent tense encounter in Texas, when a park ranger attempted to break-up a large group of young partiers at a large city park and nature area. It happened at the Commons Ford Metropolitan Park in Austin, Texas. A group on Lake Austin was reportedly unlawfully drinking and smoking on the grounds when a ranger approached and ordered them to “disperse” also due to people were not standing six feet apart.

That’s when things got physical, resulting in the officer being pushed or thrown into the water, according to widely circulating footage:

PARK PUSHING: Video shows a park ranger trying to get a crowd at Commons Ford Park to social distance before being pushed into Lake Austin. READ THE FULL STORY: https://t.co/JW8mzICvqD pic.twitter.com/gxiUKE20ZG

Though the laughing group of what appeared to be college students took it as a prank, police later apprehended and arrested a 25-year old man for assault on the ranger. The man initially tried to run away as the ranger struggled to get out of the water.

It illustrates a rising trend of frustrated citizens coming up against local law enforcement eager to see safe distancing between patrons.

The Austin-American Statesman described the scene:

“Keep that 6 feet of distance with each other,” the ranger says.

Some in the crowd are heard saying “will do” and “I got you, man” before the ranger is pushed into the water.

Hicks could have “caused the ranger to strike his head on the dock as he was falling,” the affidavit says.

Other onlookers came to the ranger’s aid even apologized for the young man’s behavior. 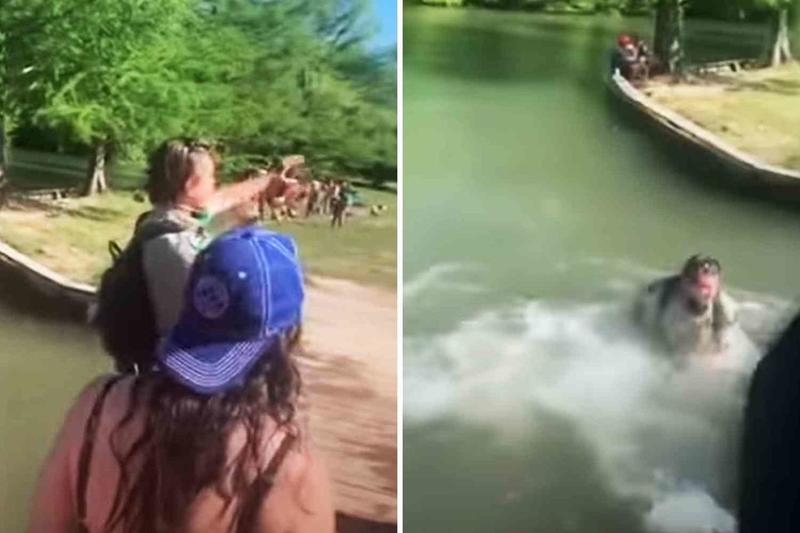 The culprit was later charged with a felony for assault on a law enforcement officer.

Likely there will be many more such encounters in various contexts across states in the coming days, as more and more Americans begin taking matters into their own hands and defying state and local distancing orders.

A park ranger who was trying to disperse a crowd on a sunny Thursday at Lake Austin says he was pushed into the water. Police say a 25-year-old has been arrested in the case.
https://t.co/aQPgDC1fid

Though we might also note that fiercely independent Texans typically lead the way when it comes to such drastic actions signaling anger and defiance.

Local reports said the park actually temporarily closed again after the incident, due to crowds failing to heed social distancing warnings in general.