The Biden Presidency — A Disaster In The Making

A video to go along with this article was released Feb 10 at 4pm EST on Telegram. Click here to watch it early.

As Joe Biden was sworn in as president on January 20th, about half of the United States — and most of the world — breathed a sigh of relief. Finally the orange buffoon has exited stage left. It can only get better from here right? Right?

Yeah… well I hate to be the bearer of bad news, but this train wreck is just getting started. The Biden Harris presidency is a disaster in the making. It will leave moderates disillusioned while fueling insurrection on the far left and right. The chaos we saw at the capitol on January 6th… that was nothing. As a country you guys are sleepwalking into very dangerous territory.

Let’s start with the elephant in the room. A large percentage of conservatives (up to 83% of Republicans according to one poll) don’t believe Joe Biden won the 2020 election. Now you might say these people are delusional. You might say that they’re crazy. But nothing you say is going to change the fact that they feel cheated. And nothing you do will increase the legitimacy of the Biden administration in their eyes. It’s worth noting that a large percentage of the police and military count themselves among conservatives, so the implications here are quite serious.

The outrage from the left on this issue rings hollow. After all they just spent the past 4 years refusing to accept the outcome of the 2016 election while peddling half baked conspiracy theories about Russian interference. Evidence? Who needs evidence? In this regard, both sides have some growing up to do.

Big tech’s current strategy of silencing and de-platforming anyone who talks about this stuff (or expresses any opinion they don’t like) is going to backfire. These policies are feeding the perception that peaceful avenues of political change have been closed, and they’re pushing moderates into the arms of extremists. You take away someone’s voice… You make them feel powerless. Where do you suppose that leads?

What many don’t seem to realize is that during the Trump administration militia and survivalist movements were largely pacified. Their man was in power, and he was going to make America great again! So most of them stopped talking about overthrowing the government or preparing for the collapse; instead focusing their attention on the antics of antifa and BLM. As of January 20th this demographic has begun to absorb some bitter realities: not only has their hero been kicked to the curb, but the Democrats now also control the house and the senate. This means new laws, and some of those laws are not going to go over very well. For example gun control. What are the chances that Biden resists the urge to kick that hornet’s nest?

And let’s not pretend that the right is the only chaotic variable in this equation. The Democrats might not believe that antifa exists, but that certainly didn’t stop them from smashing the DNC’s windows on inauguration day. These people don’t want Biden, they want revenge, and they’re not gonna go away.

One of the banners the Antifa group had while marching. Taken before the Democratic Party building in Portland was attacked. pic.twitter.com/lsVYgkwFwp

Nor is it likely that the BLM movement is going to going to stand down for the new administration (especially after being overtly snubbed once the election was over).

The fact that Biden and Harris both have a long history of supporting policies that put thousands of African Americans behind bars certainly doesn’t help matters.

The potential for an insurgency on all sides hasn’t been lost on the establishment. That’s why they’re signaling that the full force of the national security apparatus will now be pointed inward to deal with “domestic terrorists”.

Surprised? Don’t be. In Biden’s own words he practically wrote the PATRIOT act.

So clearly a train wreck on the domestic front, but what about foreign policy? Let’s take a look at Biden’s cabinet picks.

Over one-third of Biden’s Pentagon transition team list their most recent employment as organizations, corporations, or think tanks that directly receive money from the weapons industry.

Biden’s pick for Secretary of Defense, retired four star Army General Lloyd Austin Sits on the board of Ratheon. Austin is also known leading the 3rd infantry division which spearheaded the invasion into Iraq. But hey. none of that matters. The appointment is historic, because skin color.

And then there’s Kathleen Hicks, the first woman to be chosen as deputy defense secretary. Never mind the fact that Hicks is the Henry Kissinger Chair at the Center for Strategic International Studies a warmongering think tank, or that her podcast is sponsored by weapons corporations BAE, Lockheed Martin, and Northrop Grumman. Just listen to the intro.

Can't make this up. The head of the Biden transition's Pentagon team is Kathleen Hicks, "Henry Kissinger Chair" at warmongering think tank CSIS

Biden’s nominee for Secretary of State Antony Blinken supported the wars in Iraq and Libya and is currently advocating for regime change in Venezuela.

“In fact, I think it’s been written about. I was [Biden’s] national security adviser, and he didn’t agree with that course of action.” pic.twitter.com/ZyCzTLXtOP

“Maybe we need to look at how we more effectively target the sanctions we have so regime enablers really feel the pain” pic.twitter.com/qtYDm0hn0O

Blinken: “I support providing that lethal assistance [arms] to Ukraine. In fact, I had the opportunity to write exactly that in the New York Times about three years ago.” pic.twitter.com/iMDlwOgWbg

Biden is also bringing back Victoria Nuland as U.S. undersecretary of state. In case you’ve forgotten, Nuland is the one that worked with Neo-Nazi extremists in Ukraine to topple Yanukovich back in 2014. 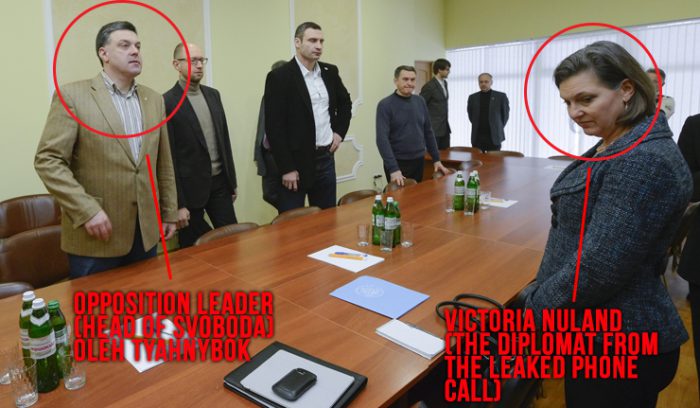 The man shown in this photo, Oleh Tyahnybok has come under fire for calling for Ukrainians to take up arms against a “Muscovite-Jewish mafia”, and writing a letter calling for the government to halt the “criminal activities” of “organised Jewry”. This is according to the BBC.

And of course we have Biden’s pick for the Head of the Office of Management and Budget Neera Tanden who has gone on record calling for Libya to pay for the privilege of being bombed. “We have a giant deficit, they have a lot of oil. Most Americans would choose not to engage in the world because of that deficit. If we want to continue to engage in the world, gestures like having oil-rich countries partially pay us back doesn’t seem crazy to me.”

At Caitlin Johnstone so eloquently put it: Biden Will Have The Most Diverse, Intersectional Cabinet Of Mass Murderers Ever Assembled. Nice.

But at least Biden will turn things around for the environment right?

On his Environmental Protection Agency Transition Team Biden installed Michael McCabe, a former Dupont Chemical executive who worked to fight regulations on the chemical industry. McCabe led Dupont’s defense against the regulation of a chemical called C8, which has been linked to cancer, liver damage, and infertility.

Biden’s pick for Agriculture Secretary Tom Vilsack, a.k.a. Mr. Monsanto is an ardent advocate for the biotech industry. During Vilsack’s previous tenure at the Agriculture Department he sped up approval of GMO crops and made policy changes to allow poultry slaughter facilities to essentially police themselves.

Now there’s no way to sugar coat this picture. Biden’s victory doesn’t represent the end of an era chaos, but merely a new chapter. Those who want to avert the worst case scenario need to be working to unify a coalition of the sane; a strain of opposition that doesn’t fall for the left / right paradigm trap; a contingent that’s not so naive to believe that they can vote their way out of this mess.

To accomplish this we need to establish networks of communication that tech companies can’t censor or shut down. It’s time to migrate from Facebook and Twitter to Telegram, and from Youtube to Odysee. Join us there now, and encourage your friends and family to make the move as well. Don’t let silicone valley silence you.

If you want to understand why all of this is happening visit StormCloudsGathering.com. The disintegration of the post World War II order is accelerating, and the powers that be have badly miscalculated. Those who see what’s coming would be well advised to move away from big cities. Time to start growing your own food. Detach from the grid and reduce dependence on fossil fuels. A great reset is in the works, but what comes next is up to you.

Republished from StormCloudsGathering.com under Creative Commons