The First Day of Ghislaine Maxwell’s Trial: Everything You Need to Know

Update (1615ET): The prosecution opened its case against Ghislaine Maxwell on Monday, beginning with a disturbing tale of how the British Socialite and convicted pedophile Jeffrey Epstein recruited underage victims for sexual predation.

As Matthew Russell Lee blogged for the Inner City Press:

AUSA Pomerantz: The man and woman were predators. Jane was not their only victim. There were other young girls. Who was that woman? It was the defendant, Ghislaine Maxwell. The defendant took these girls on shopping trips and won their trust. She talked sex

AUSA Pomerantz: There were times she was in the room when it happened. That is why we are here today. Between 1994 and 2004 the defendant sexually exploited young girls. She preyed on them and served them up to be sexually abused. She was trafficking kids for sex ..He owned a ranch in New Mexico, an apartment in Paris, a mansion in Manhattan, Palm Beach, a private island. Epstein has private planes and pilots. The defendant got to enjoy that luxury right along with Epstein.

The defendant was the lady of the house. She imposed rules. Employees were to hear nothing, see nothing, say nothing. There was a culture of silence. That was by design. The defendant’s design. They had a play book: get access, gain trust. They often targeted the daughters of single mothers, struggling to make ends meet. They made these girls feel seen. But that was a cover.

To get the girls to touch Epstein, they used the cover of massage. The defendant massaged Epstein then told the girls to do it. Epstein brought girls into his massage room every single day. It was sexual abuse. Before I describe those so-called massages, let me say: these are the facts. Epstein touched the teenage girls with equipment… He sometimes penetrated… The defendant helped Epstein find those girls, for so-called massages. They lured their victims with a promise of a brighter future then destroyed their lives. The defendant was jet-setting in private planes.

So what happened to Jane? You will hear from her. Someone from Epstein’s office invited her to Epstein’s house. He told her mother he was offering a scholarship. Jane was 14 – a kid. Epstein was in his early 40s, the defendant in her early 30s. Jane traveled to New York to Epstein’s mansion, where he abused her. She was not the only one. You will learn about multiple girls during the course of this trial. You will learn about a 16 year old girl who traveled to the ranch in New Mexico.

The defendant told the girl she was going to give her a massage. But she touched her elsewhere. The girl was 16 years old. There’s a 17 year old, spotted in a parking lot. The driver pulled over. [Maxwell puts on her glasses and jots down notes]

They moved beyond scholarships and moved on to a pyramid scheme of abuse. They encouraged girls to bring other girls, for extra cash. The defendant knew exactly what she was doing. That’s what we expect the evidence will show. You’ll hear about a fund that paid millions to the victims of Jeffrey Epstein. But you will learn that these victims would have paid anything to have this not have happened to them. You will hear from relatives. You will hear from staff members.

Maxwell’s lawyer Bobbi Sternheim then spoke – opening with: “Ever since Eve, women have been blamed for the evil deeds of men. Ghislaine Maxwell is not Jeffrey Epstein or any of the other men, moguls and media giants who abuse women.”

Sternheim: We are proud to represent Ghislaine Maxwell, me and Christian Everdell, Laura Minninger & Jeffrey Pagliuca [pronounced like "Lasagna," G silent]
Sternheim: These witnesses want a jackpot of money. There are 4 accusers. They'll say Ghislaine groomed them

Sternheim: Ghislaine is a stand-in for a man who behaved badly–
AUSA: Objection!
Judge Nathan: Let me hear from counsel at the sidebar.
[Non-public whispering]

Read the rest by clicking on any of the above tweets.

Needless to say, it appears this trial will be about claims against Epstein and Maxwell vs. Maxwell’s attorneys casting doubt while trying to frame Ghislaine as some sort of a victim herself. Stay tuned…

Update (1426ET): The jury in the sex trafficking trial of Ghislaine Maxwell has been seated for the British socialite’s trial, where six men and six women will decide if she trafficked underage girls for sexual abuse by Jeffrey Epstein and pals.

According to Bloomberg, the jury ranges in age from 27 to 70 – and most of them say they don’t follow the news closely. Several jurors who said they had closely followed the Epstein saga were excused from serving.

Here’s what we know about the 12 jurors via Bloomberg (emphasis ours):

Six alternates have also been chosen – including a 36-year-old real estate broker who studied civil engineering in the Dominican Republic, and a 54-year-old woman who lives in Westchester and works in maintenance “in a building in the city.”

Is there another giant Epstein bomb about to drop?

With the way social media blew up this weekend about the Ghislaine Maxwell trial coverage, one might think so. Over the last few days, messages on Facebook and Twitter have expressed disgust and skepticism about the fact that the Maxwell trial will not be livestreamed, similar to the way the Kyle Rittenhouse trial was.

There have been Tweets abound suggesting that press may be banned from the courtroom and that Judge Alison Nathan had issued some type of “gag order” preventing the press from being at the trial..

Tweets like these were abound, making their way across social media all weekend:

BREAKING: “Judge In Ghislaine Maxwell Trial Issues Media-Wide Gag Order: All Press & Spectators Barred From Courtroom.”
We know who they are protecting and we can’t allow it!

But these assertions look as though they may not be entirely true.

Federal trials prohibit all cameras, Newsweek reported this morning. “Cameras were allowed in Rittenhouse’s as it was a state trial, held in a Wisconsin state court,” their article said, debunking the notion that since one trial was livestreamed, the other one should be. 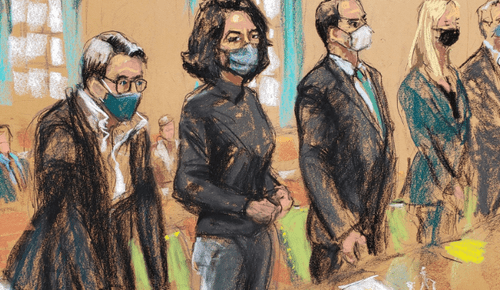 Newsweek instead reported this morning that that no gag order had been issued and that the press are being “guaranteed access” to the courtroom:

Contrary to claims made on social media, a judge has not issued a gag order, and per federal rules, only individuals inside the courthouse will be able to watch the trial. Among those being guaranteed access to the trial are members of the press, alleged victims, and members of Maxwell’s family.

“First, consistent with the District’s COVID-19 distancing requirements, a number of pool reporters and members of the public will be permitted in the courtroom proper as managed by the District’s Executive Office. Second, press will also be able to access the trial in dedicated overflow courtrooms for the press.”

Either way, we are expecting fireworks and will follow developments as they occur…