Update 1650ET: In a post with comments disabled, the editors of The Intercept have responded to Greenwald’s decision to leave – writing “The narrative Glenn presents about his departure is teeming with distortions and inaccuracies — all of them designed to make him appear as a victim, rather than a grown person throwing a tantrum.”

They suggest that Greenwald was “attempting to recycle the dubious claims of a political campaign — the Trump campaign — and launder them as journalism.”

We assume they’re referring to the undisputed contents of the Hunter Biden laptop, along with evidence from two former Biden associates, implicating Joe Biden in numerous corrupt acts involving his son Hunter.

The Intercept includes several low-blows in their response;

Perhaps allowing divergent opinions would help the beleaguered outlet’s traffic, which appears to have been cut in half over the last six months.

The Intercept co-founder Glenn Greenwald resigned from the outlet on Thursday, after ‘editors censored an article I wrote this week, refusing to publish it unless I remove all sections critical of Joe Biden, the candidate vehemently supported by all Intercept editors involved in this effort at suppression.’

"The final, precipitating cause is that The Intercept’s editors censored an article I wrote this week, refusing to publish it unless I remove all sections critical of Joe Biden, the candidate vehemently supported by all Intercept editors involved in this effort at suppression."

3) Given their claims, I'm going to publish — along with the censored article — the emails about it so people can decide for themselves if it was censored.

4) I understand TI's editors will slam my journalism as "changed"; I wish they had had the courage to do it before today.

5) Like I said in my statement, The Intercept does still have some great journalists and publishes good things. I hope they can figure out how to induce some people to read it.

6) This is the CIA-mimicking paragraph I referenced that I was shocked to see at The Intercept: pic.twitter.com/q9jILPwret

The censored article, based on recently revealed emails and witness testimony, raised critical questions about Biden’s conduct. Not content to simply prevent publication of this article at the media outlet I co-founded, these Intercept editors also demanded that I refrain from exercising a separate contractual right to publish this article with any other publication.

I had no objection to their disagreement with my views of what this Biden evidence shows: as a last-ditch attempt to avoid being censored, I encouraged them to air their disagreements with me by writing their own articles that critique my perspectives and letting readers decide who is right, the way any confident and healthy media outlet would. But modern media outlets do not air dissent; they quash it. So censorship of my article, rather than engagement with it, was the path these Biden-supporting editors chose.

Apparently he’s also blocked from publishing the article elsewhere, though he’s “asked my lawyer to get in touch with FLM to discuss how best to terminate my contract.”

What did The Intercept do in response to Greenwald leaving? They’re attempting to raise money off of it! 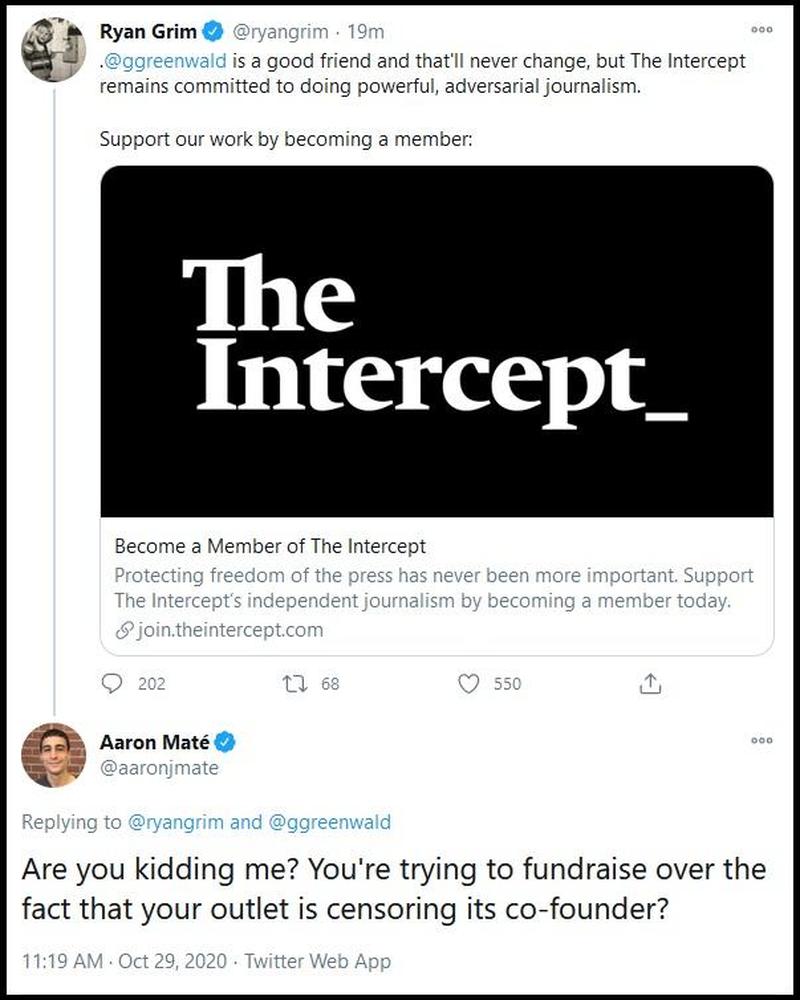 Greenwald has found support across the political spectrum for his decision to walk.

.@ggreenwald and i have disagreed about lots of things over the years — he's taken shots at me and vice versa — but i have always respected his mind, courage and voice. today, i respect him even more. https://t.co/MyWWy7W3S6

Much respect for the principled move, Glenn.

It's been a tragedy to see The Intercept increasingly abandon adversarial reporting and adopt Democratic orthodoxy, especially in its international coverage of Washington-appointed bogeymen.

I look forward to seeing your future work.

It's sad that it's come to this. As I've said, I do not always agree with you, but you are one of very few people who says exactly what they believe and can be trusted to call things exactly how you see them without fear or favor. That is rare and vital. I wish you all the best.