After his late jump into the Democratic primary and, as critics argue, purchasing his way into the primary debates, former Mayor of New York City Michael Bloomberg has received mixed coverage from corporate media, with many negative critiques of the current presidential contender’s history, conduct and connections.

Yet, despite efforts by other campaigns and more progressive-leaning media outlets to dampen Bloomberg’s chances at the nomination, one clear weakness of Bloomberg’s has thus far evaded meaningful media coverage: his ties to key players in the Epstein scandal, including Leslie Wexner, Ghislaine Maxwell and even Jeffrey Epstein himself.

Silence among outlets that largely oppose Bloomberg’s candidacy regarding his connections to Epstein and those in his close social orbit is odd, especially when reporting on an individual’s connections to the intelligence-linked pedophile are a sure-fire way to generate considerable negative attention and fodder for rival campaigns. This is particularly striking given that the numerous accusations that Bloomberg has long stoked a toxic culture of sexual harassment at his company, resulting in no small number of non-disclosure agreements over the years, have received some media attention. Yet, the fact that many of Bloomberg’s close friends have been accused of far, far worse has received hardly any coverage by comparison.

For instance, when it was announced last week that the controlling stake in the Leslie Wexner-owned lingerie company Victoria’s Secret would be sold to a private equity firm called Sycamore Partners, only one media outlet — The Intercept — revealed that Bloomberg has at least $136 million of his money in that firm. The Intercept noted in passing that Wexner — the source of most of Jeffrey Epstein’s supposed fortune, his close collaborator for decades and alleged rapist of many of his victims — had been pressured to step down following the scandal, which also hit Wexner-owned companies hard and had forced the Ohio-based billionaire to seek a buyer for his lingerie brand and its tarnished reputation. Yet, the outlet did not make the direct connection that Sycamore Partners-backer Bloomberg is a friend of Wexner’s and has attended Wexner’s personal social parties for years prior to the most recent scandal.

Yet, even well before this recent opportunity to point out Bloomberg’s ties to Leslie Wexner, there have been plenty of opportunities for the media to question Bloomberg about his now-infamous picture with Ghislaine Maxwell, daughter of Mossad-connected Robert Maxwell and Epstein’s alleged madam and co-conspirator. 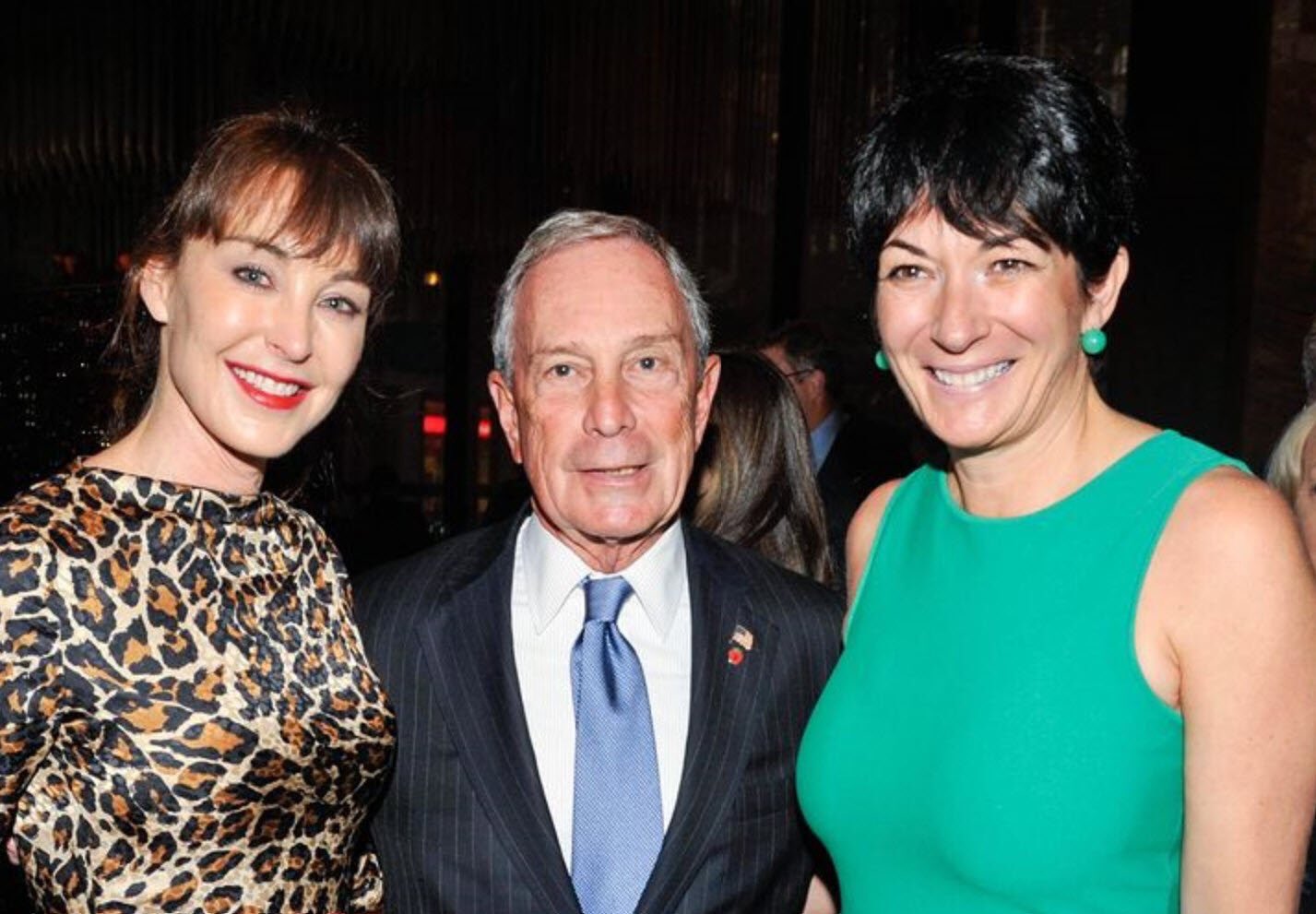 That picture, taken in 2013 at the Four Seasons restaurant in New York, has not been mentioned by mainstream media following the launch of Bloomberg’s candidacy late last November. Similarly, mainstream media have failed to question Bloomberg regarding why his name and five different telephone numbers for him appear in Jeffrey Epstein’s infamous list of contacts often referred to as his “little black book.”

Bloomberg and the Manhattan Swamp

The extent of the Maxwell-Bloomberg relationship is unknown, though Bloomberg’s deep ties to his former employer Salomon Brothers is a possible link, given that that firm served as one of the Maxwell family’s main investment bankers in the years prior to and following Robert Maxwell’s mysterious death in 1991. Similarly, Epstein had close ties to prominent figures on Wall Street, some dating back to his time at Bear Stearns, who are also close to Bloomberg.

Bloomberg and Epstein also shared close friendships with some of the same New York media executives like Mort Zuckerman. Media outlets have described Zuckerman, a former business partner of Epstein’s, as Bloomberg’s “long-time enabler.” In another example, Epstein’s former publicist Howard Rubenstein is a long-time supporter of Bloomberg and was reported to be the driving force behind Bloomberg’s controversial push to run around mayoral term limits and pursue a third term as Mayor of New York.

Another mutual Epstein-Bloomberg associate is disgraced media mogul Harvey Weinstein. Weinstein was part of an investment group with Epstein that sought to purchase New York magazine in 2003. Another member of that investment group was frequent MSNBC commentator Donny Deutsch, who has recently fervently backed Bloomberg’s candidacy.

Weinstein was recently convicted of rape and has dozens of accusers, whose decision to come forward about Weinstein’s sex crimes in recent years helped spark the “Me Too” movement. Weinstein also has ties to former Israeli Prime Minister Ehud Barak, who was a close friend and business associate of Epstein’s, and it was Barak who personally introduced Weinstein to former Mossad spies that Weinstein hired to intimidate his accusers. In addition to being Prime Minister, Barak is also the former head of Israeli military intelligence, the foreign intelligence agency that sponsored Epstein’s sexual blackmail operation involving underage girls in the United States.

Bloomberg’s candidacy has yet to be strongly challenged over his ties to Weinstein, which are considerable. For instance, Weinstein was a major backer of Bloomberg’s mayoral campaigns and even recorded robocalls on Bloomberg’s behalf to boost his election chances. Bloomberg, in turn, appointed Weinstein to a charity board and Weinstein later praised Bloomberg for aiding his film company. While Bloomberg’s ties to Wexner, Epstein and Maxwell have gotten the silent treatment, some outlets (mostly right-leaning) have covered the Bloomberg-Weinstein ties, but there has been little pressure on Bloomberg from mainstream media to address those ties directly.

Another close Bloomberg associate who recently has been accused by numerous women of sexual harassment is hedge fund manager Michael Steinhardt. Steinhardt is a long-time fixture in Bloomberg’s social circle and has long appeared at Bloomberg’s dinner parties. Steinhardt is also connected to Leslie Wexner through his membership in the so-called “Mega Group” — an exclusive group of organized-crime-linked “mega” donors to pro-Israel causes that Wexner co-founded in 1991. Steinhardt also boasts close ties to the now deceased founder of Glencore, the Mossad-linked Marc Rich, and Steinhardt — along with top Israeli politicians and spies — aggressively lobbied former President Bill Clinton to controversially pardon Rich before leaving office.

The oft-quoted saying “Show me your friends and I’ll tell you who you are,” seems to hold true for Bloomberg. For instance, his eponymous media conglomerate has received no small number of lawsuits over the years alleging rampant sexual harassment and even the rape of female workers, much of its allegedly egged on by Bloomberg’s long history of comments that have been derided as sexist. Many of those lawsuits ended in female accusers being asked to sign non-disclosure agreements (NDAs). More recently, The Nation reported that Bloomberg’s 2020 presidential campaign is making use of NDAs in such a way “that could prevent staffers from reporting workplace abuse.”

In addition, a 1999 profile of Bloomberg in Wired magazine quoted Bloomberg as saying “My daughter is tall and busty and blonde. We went to China together. And what’s a 16-year-old going to do on a business trip? So, I got her dates in every city in China.”

Bloomberg, not unlike Epstein and Wexner, also has a history of cozy ties to the CIA. For instance, during his tenure as Mayor of New York, Bloomberg actively promoted a controversial post-9/11 program that saw the CIA work directly with the NYPD to spy on the city’s Muslim communities. Even though the CIA is technically prohibited from spying on Americans not linked to criminal activity, one of the CIA officers working as part of the Bloomberg-backed program said he had “no limitations” on what he could do. Bloomberg has long defended this program and its merging of the CIA with local police.

In the case of Epstein and Wexner, as MintPress News reported in its viral series on the Epstein scandal last year, Epstein once claimed to have worked for the CIA during the 1980s and Epstein and Wexner were the key players behind the relocation of CIA front company Southern Air Transport to Ohio, where Wexner’s business interests have long been based.

In addition, Bloomberg was also a key player in a controversial initiative regarding Israel’s intelligence-linked technology sector. For instance, Bloomberg created a $2 billion project that involved opening a Manhattan campus called “Cornell Tech” that brought together Cornell University and Israel’s Technion, which has close ties to Israel’s national security state and military-industrial complex. Bloomberg personally gave over $100 million to facilitate completion of that project. That campus is now a partner in the recent creation of two Israeli-run “cybersecurity” centers in New York City that are tied to Israeli intelligence and were recently reported on by MintPress.

Jeffrey Epstein was also involved with Israeli military intelligence-linked technology companies and, as previously mentioned, Israeli military intelligence was also the sponsor of Epstein’s sexual blackmail operation that targeted mostly U.S. politicians and public figures for the benefit of the state of Israel, whose military currently receives $3.8 billion per year from U.S. taxpayers.

While these aspects of Bloomberg’s past have received considerable media attention as of late, these same outlets have failed to note that Bloomberg’s inner circle boasts many individuals accused of harassment, rape or worse. With his clear ties to the “Epstein network,” the fact that mainstream media has declined to even question Bloomberg about his social appearances with Ghislaine Maxwell or Leslie Wexner and having five different telephone numbers of his in Epstein’s list of high-profile contacts is a damning indictment of the current landscape of both American media and American politics.