The positive covid vaccine results from Pfizer last Monday, and again from Moderna today, could not have come sooner (although if they had, the outcome of the presidential election would have been vastly different for Trump, whose claims that a vaccine would be discovered this year were met with mockery by NBC’s fact checkers).

Media fact-checkers said @realDonaldTrump was likely wrong about a coronavirus vaccine by year's end, and he needed a "miracle" to do it. For example, @nbcnews in May: "Fact check: Trump needs 'miracle' to be right about rosy vaccine timeline, experts say" https://t.co/xEH2QDvF45

The reason why the good news was critical, is because as Bank of America writes, something big happened in the COVID crisis: a dramatic surge in new cases. 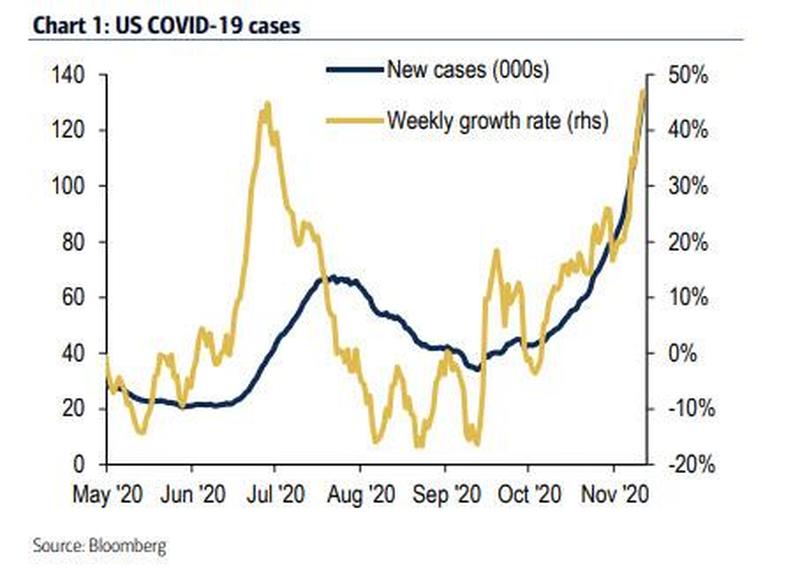 As BofA’s Ethan Harris explains, on Wednesday the seven-day average hit 131k, well above the 67k peak this summer, while “even more striking is the acceleration in new case growth: from about 20% per week on the day of the election to more than 40% now.” At that rate BofA calculates that new cases will more than double every two weeks. Even if the growth rate falls back to 20%, that would mean cases double every four weeks (remember what we said that the Fed needs a “new crisis” to double its QE? Well, we now know what that “crisis” is, especially since neither the Pfizer nor Moderna vaccines will be widely available until mid-2021.

So as part of its build up of the next crisis, BofA – which not long ago said that much of the surge in new cases was only due to increased testing – said that there doesn’t seem to be anything fluky about these numbers: “Cases are increasing in almost every state, and 36 states have made record highs in cases in the last week. This is quite different from the spring, when the northeast was hit very hard but most of the rest of the country was only mildly impacted.”

Amusingly, refuting its own previous comments on the topic, Harris writes that “in the past, optimists [such as Harris himself] have argued that policymakers should not focus on case counts because testing and treatments have both improved significantly.  Therefore as long as hospitalizations and deaths do not surge, there is no need for additional restrictions. Unfortunately according to BofA, the news isn’t good here either.

According to the bank, “while testing did more than double, from ~930k in end-September to 2.1mn at the end of last month, if true infections were not rising this should have caused a big drop in the positivity ratio, since the incremental tests are likely to be done on people who are less likely to be infected.” But the positivity ratio dropped only modestly, from 4.7% to 3.7% as testing doubled.

But what is even more remarkable than the exponential grind higher in new cases, is that there has suddenly been a huge drop in testing this month, accompanied by a surge in positivity ratios, and while BofA believes this is likely due to reporting issues, it’s certainly something to keep a close eye on. 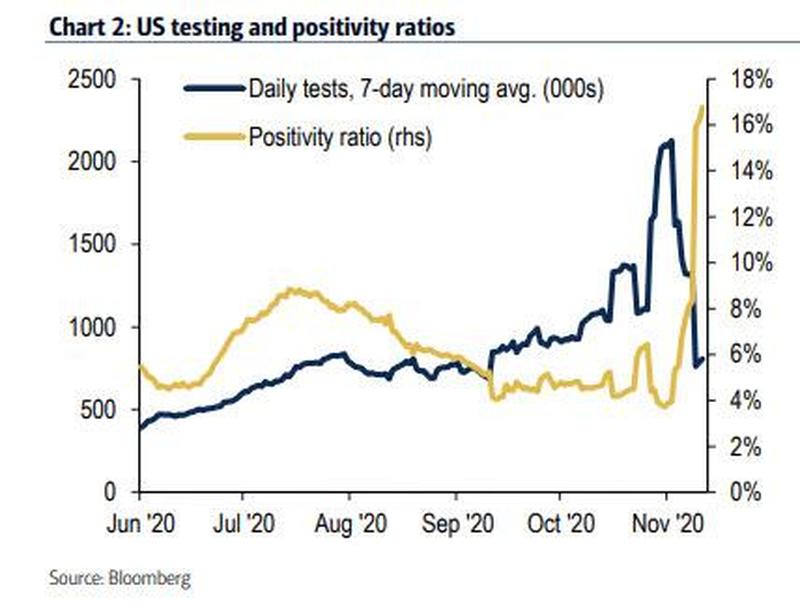 Just as troubling is that while treatments have improved significantly since the spring, the data suggests that there has not been further improvement recently, as BofA explains:

Consider the following simple exercise. The lag from cases to deaths is generally estimated to be three-to-six weeks and has tended to get longer over time. Chart 3 shows the estimated ratio of fatalities to cases using three- and six-week lag. 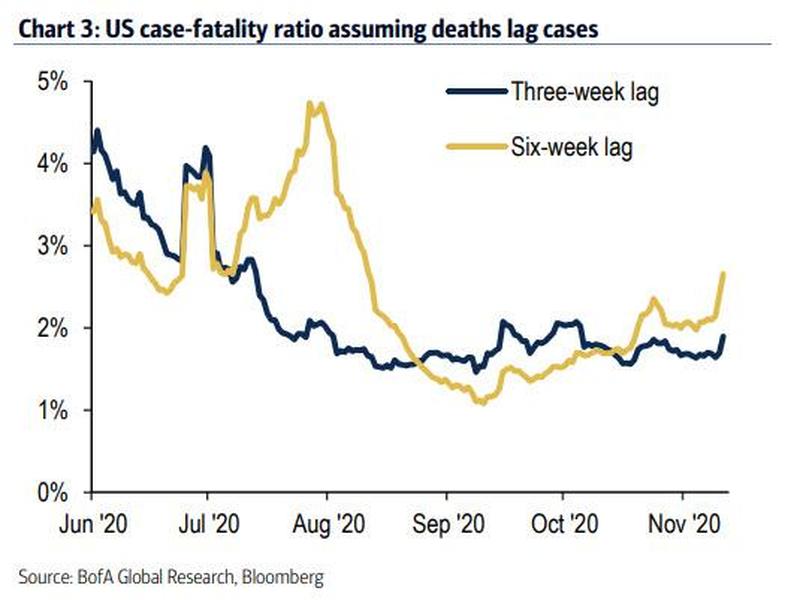 Using a three-week lag, the share of cases the lead to deaths is quite stable in recent months at about 1.5% to 2.0%. If we assume a six-week lag, the share has actually been trending up. That is particularly troubling because more testing is supposed to mean fewer fatalities per case as more people without symptoms are tested. Even if we assume a ratio of 1.5%, new cases over the last week would result in nearly 2,000 daily deaths a few weeks down the line. This is close to the peak in daily deaths from the
spring.

Meanwhile, as we transition into the winter, cases will likely continue to rise as activities move indoors, social distancing fatigue gets worse, and people travel and gather with relatives for the holidays. According to BofA, “it seems reasonable that cases could double over the next month”, which again, would be just the kind of crisis the Fed needs to expand QE.

And, as Harris adds, “in that case a flat case-fatality ratio might be too optimistic because the more the virus spreads, the harder it becomes to protect vulnerable people. Chart 3 shows that the fatality ratio has already started to rise in recent days.”

What happens next is unclear.

Indeed, as BofA writes, “it’s not clear what will stop this exponential expansion. The containment measures taken thus far have been very localized and limited. Unlike in the summer, the rise in cases does not seem to have prompted much change in individual behavior. On the other hand, “the good news is that indicators of daily activity show little, if any, impact on the economy. The bad news is that daily virus data suggest little, if any, impact on the virus.”

In BofA’s view, it will take longer for local officials to respond to the current surge: “Because the virus is spread across the country only a few places are already running out of hospital capacity. We also understand why Governors across the US are hesitating to reimpose strict restrictions.”

On the other hand, the economic costs are only about to re-emerge: Many businesses did not survive the first round of shutdowns in the spring, and additional closures could be economically devastating. This is particularly true given the lack of fiscal support for consumers and businesses this time around. There are no PPP funds, bonus unemploment benefits or aid to states to cushion the blow. Strict restrictions also might not be politically popular, given growing social distancing fatigue. All of this will have to be weighed against the political appetite for a very bad public health outcome.

BofA’s concerns are not merely theoretical, as recent events in Europe have demonstrated.

With Europe a few weeks ahead of the US in the virus cycle, the scenario described above has played out in France and particularly the UK. Both countries tried to ride out the outbreak without hurting the economy, before eventually capitulating when the situation in hospitals became very challenging and ultimately, both went on to impose strict lockdowns. As we showed last week, mobility has collapsed across Europe following the new round of shutdowns, and according to BofA, the new round of restrictions will likely lead a 5% annualized GDP contraction in 4Q in Euro area, and almost an 11% drop in output in the UK. 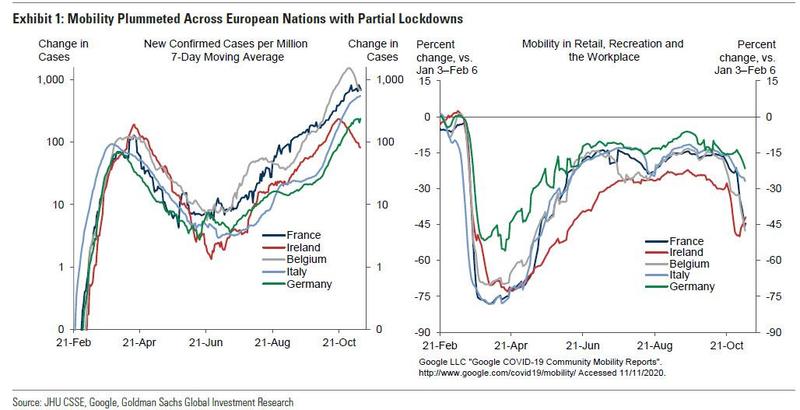 The US is well on its way to seeing its own “crisis”: last week, the city of Chicago issued a stay-at-home advisory, with many more restrictions following across the country. And while so far high frequency indicators in the US show little adverse impact from partial shutdowns… 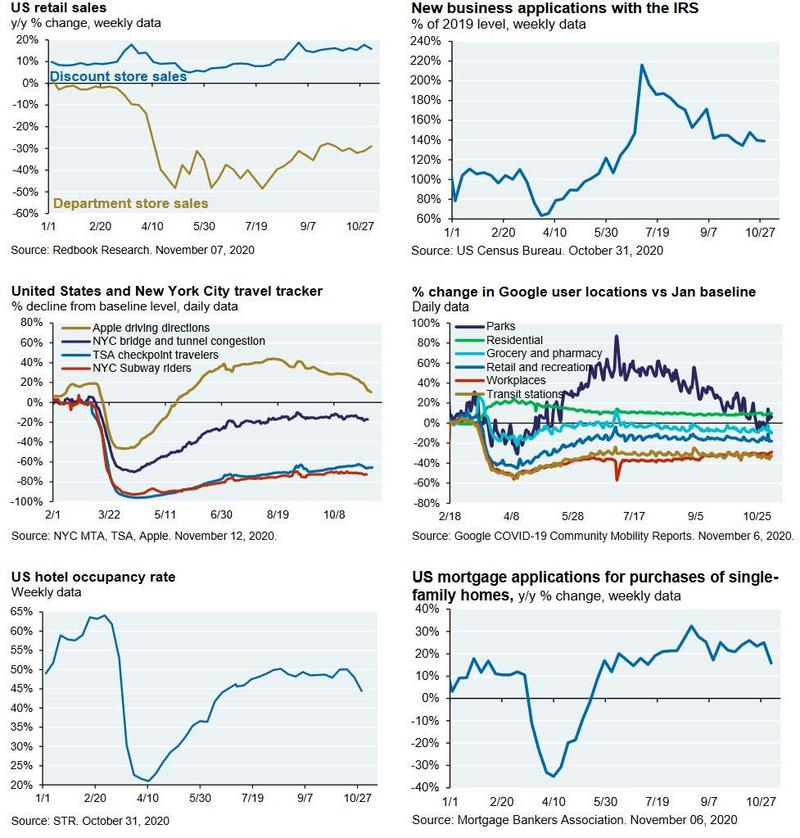 … whether the data hold up given the latest advisory remains to be seen.

Unfortunately, the most likely outcome is the one we “modeled” over the weekend: vaccines in process of rollout will not be made available until early/mid 2021 but by then the economy – either partially or fully locked down – will be deep in a double dip recession. And with no aid coming from a deadlocked Congress, it will be up to the Fed to step up. It will do so, by doubling its monthly QE from $120BN to $240BN, in the process also ensuring it has enough capacity to monetize the entire US fiscal deficit in 2021 which is projected to hit $3.5 trillion.