President Trump fired off a Thursday tweet that’s about to dominate the weekend news cycle – suggesting that the 2020 election could be postponed over concerns that mail-in ballots will lead to “the most INACCURATE & FRAUDULENT Election in history,” adding “It will be a great embarrassment to the USA. Delay the Election until people can properly, securely and safely vote???”

With Universal Mail-In Voting (not Absentee Voting, which is good), 2020 will be the most INACCURATE & FRAUDULENT Election in history. It will be a great embarrassment to the USA. Delay the Election until people can properly, securely and safely vote???

Never in American history—not even during the Civil War and World War II–has there been a successful move to “Delay the Election” for President.

We all knew it was coming to this. Make no mistake about it: Any announcement of a delay of the election will be a declaration of war against America by our criminal president. https://t.co/fIAE4spGWd

Kids can go to school, but we can’t vote?

Both CNN‘s Manu Raju and Business Insider went with the very editorialized “baseless” to describe voter fraud, despite a plethora of evidence it’s indeed based (see below). 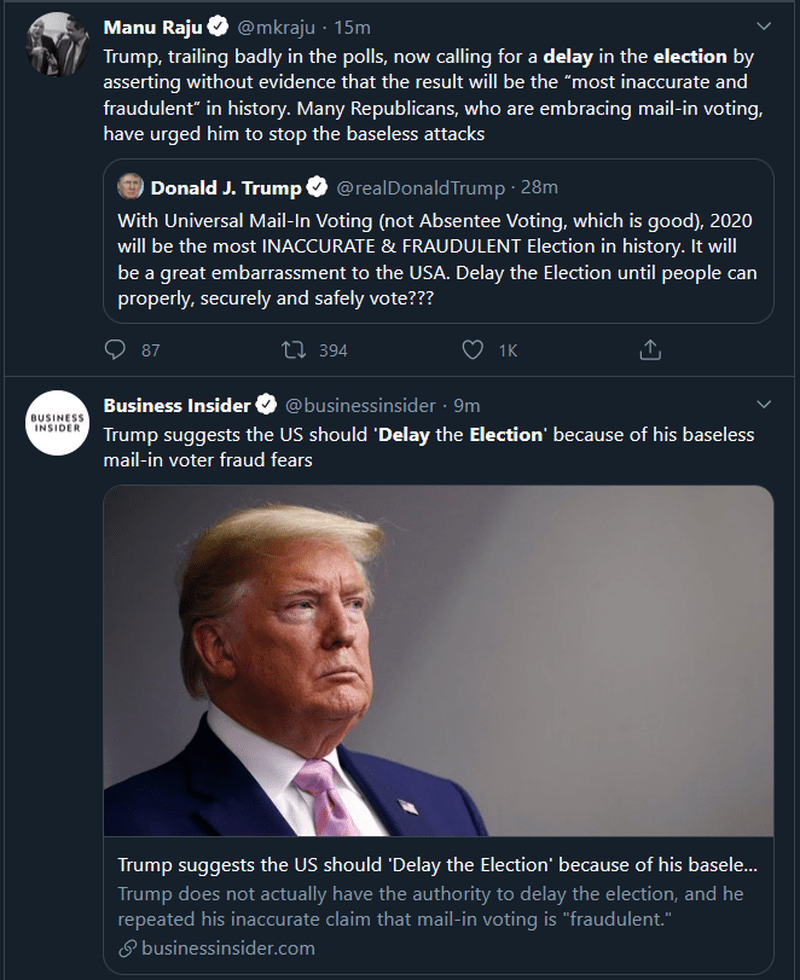 And of course, this is also a giant distraction:

This plays into an April warning by former VP Joe Biden, who said “Mark my words I think he is gonna try to kick back the election somehow, come up with some rationale why it can’t be held.”

“We have to figure out how we are going to conduct a full and fair and safe election in November and no one should have to risk their lives to cast a ballot,” Biden added.

The Trump campaign’s ‘War Room’ account replied to the president’s tweet with a report that “68% of Voters Are Concerned About The Security of Mail-In Ballots.”

68% of voters are concerned about the security of mail-in ballots!https://t.co/SuobT07oez

A poll in late June by The Hill – HarrisX found that 68% of registered voters were either ‘somewhat or very concerned about the possibility of tampering with mail-in ballots.’

Republicans are much more likely to be worried about it, which is likely a reflection of President Trump‘s rhetoric on the issue. Trump has repeatedly warned, without providing evidence, that mail-in balloting is subject to fraud.

Eighty percent of Republicans in the survey said they were somewhat or very concerned with tampering with mail-in ballots, compared to 68 percent of independents and 56 percent of Democratic voters.

Fifty-eight percent said they were worried about the privacy of their vote if they voted by mail, including 70 percent of Republicans, 53 percent of independents and 51 percent of Democrats.

But voters overall were more concerned about being exposed to the coronavirus when voting in person. –The Hill

In May, Trump tweeted that mail-in ballots would lead to the “greatest Rigged Election in history.”

The United States cannot have all Mail In Ballots. It will be the greatest Rigged Election in history. People grab them from mailboxes, print thousands of forgeries and “force” people to sign. Also, forge names. Some absentee OK, when necessary. Trying to use Covid for this Scam!

As Michael Graham of InsideSources wrote in late May:

In the 2018 midterms, a congressional election in North Carolina was overturned and had to be re-held because an unscrupulous Republican operative was using mail-in ballots to scam the system.

And the Public Interest Legal Foundation (PILF) just released data that more than 28 million ballots by mail went unaccounted for from 2012 to 2018, with more than one million going to the incorrect address in 2018 alone.

“Absentee ballot fraud is the most common, the most expensive to investigate, and it can never be reversed after an election,” said the organization’s president J. Christian Adams.

“The status quo was already bad for mail balloting. The proposed emergency fix is worse.”

More recently, “in a Supreme Court contest in Wisconsin in April, about 1,600 ballots were discovered the morning after Election Day in a mail processing facility in Chicago — 1,600 voters whose ballots did not count,” The Hill reports. “Hundreds more who applied for absentee ballots did not receive them in time, according to a report by the state Board of Elections.”

And literally the same day President Trump tweeted that mail-in ballots “would be forged,” the Department of Justice announced a mail carrier in West Virginia was being charged with attempted election fraud by committing forgery on mail-in ballots.

Of course it should be noted that the executive branch doesn’t have the authority to change the date of presidential elections – rather, it would be in hands of Congress to decide such a drastic measure.