As was widely expected and reported in the aftermath of Elon Musk going hostile on Friday morning, on Saturday morning Twitter adopted a measure that will shield it from hostile acquisition bids in a desperate step to prevent billionaire Elon Musk’s offer to take the company private and make it a bastion of free speech.

The board set up a shareholder rights plan, also known as a “poison pill” which as we clarified yesterday for the benefit of the company’s overly dramatic, overly literal and overly snowflake employees, is not literal…

Uhm, someone should probably advise employees "poison pill" is not literal…

… and which is exercisable if a party – read Elon Musk – acquires 15% of the stock without prior approval, lasting for one year (if the pill had expired the day after the midterms it may have been a bit too obvious). The plan seeks to ensure that anyone taking control of Twitter through open market accumulation pays all shareholders an appropriate control premium, according to a statement Friday.

For a company that has struggled greatly with value creation – on Friday TWTR stock closed at $45.08, or 18 cents higher than where it closed on its first day as a public company, or $44.90 – a poison pill defense strategy allows existing shareholders the right to purchase additional shares at a discount, effectively diluting the ownership interest of the hostile party. Poison pills are common among companies under fire from activist investors or in hostile takeover situations.

Twitter enacted the plan to buy time, Bloomberg reported citing a person familiar with the matter, although it wasn’t clear time for what: at $54.20, Musk’s offer represents a premium to the historical TWTR price since IPO on 92% of the time. 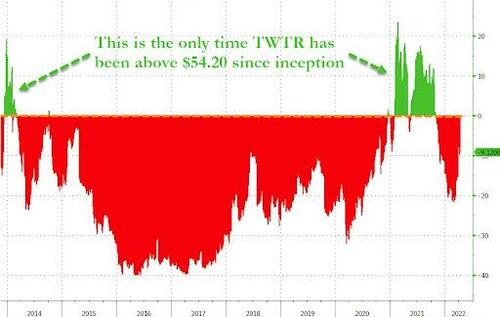 And since the board is about to get bombarded with a barrage of lawsuits claiming it violated its fiduciary duty, the board also said it wants to be able to analyze and negotiate any deal, and may still accept it (spoiler alert: it won’t).

Twitter’s board met Thursday to review Musk’s proposal – which according to the world’s richest man was his “best and final” offer and who had already accrued a stake of more than 9% in Twitter since earlier this year – to determine if it was in the best interest of the company and all of its shareholders.

Included in Musk’s securities filing disclosing the bid Thursday morning was a script of text he sent to the company. In it he said, “it’s a high price and your shareholders will love it.” Hilariously, one prominent – and former – investor said the offer was too low and the market reaction appeared to agree. Saudi Arabia’s Prince Alwaleed bin Talal said the deal doesn’t “come close to the intrinsic value” of the popular social media platform. Which is, well, hilarious since as we showed yesterday, it appears the Prince no longer has direct ownership of even one share of Twitter stock.

Speaking later Thursday at a TED conference, Musk said he wasn’t sure he “will actually be able to acquire it.” He added that his intent was to also retain “as many shareholders as is allowed by the law,” rather than keeping sole ownership of the company himself.

After initially surging, Twitter shares dropped 1.7% in New York on Thursday, reflecting the market’s view that the deal is likely to be rejected or to fall through.

Musk first disclosed his Twitter stake on April 4, making him the largest individual investor. At the TED conference, he indicated that he has a Plan B if Twitter’s board rejects his offer. He declined to elaborate. But in his filing earlier in the day, he said he would rethink his investment if the bid failed.

“If the deal doesn’t work, given that I don’t have confidence in management nor do I believe I can drive the necessary change in the public market, I would need to reconsider my position as a shareholder,” said Musk.

Previewing the poison pill defense, on Thursday, Cameron Winklevoss, founder of the Gemini cryptocurrency exchange, tweeted (of course) that “Twitter is considering a poison pill to thwart @elonmusk’s offer.” In response, Musk said that a “poison pill” move would be a “breach” of the board’s fiduciary duty and could expose Twitter’s board to “titanic” legal liability.

If the current Twitter board takes actions contrary to shareholder interests, they would be breaching their fiduciary duty.

The liability they would thereby assume would be titanic in scale.

Winklevoss alleged in his tweet that, by adopting the poison pill tactic, Twitter was demonstrating its commitment to preserving the status quo even if it has a negative impact on existing shareholders.

“They would rather self-immolate than give up their censorship programs. This shows you how deeply committed they are to Orwellian control of the narratives and global discourse. Scary,” he wrote. Twitter has repeatedly suppressed and “shadowbanned” conservative viewpoints, allegations the company has repeatedly denied.

Adam Candeub, a law professor at Michigan State University, said that Twitter’s board could face legal consequences if they turn down an offer that’s financially lucrative to shareholders.

“Twitter’s owned by shareholders, and the directors have to act in a way that’s in their best interests, not in the way that allows them to keep control of the corporation,” Candeub told The Epoch Times.

“If they turn down a very favorable price, there will be dereliction of their legal duty, and there could be lots of legal consequences.”

Now that his original plan has been thwarted, Musk has said that he has a “Plan B” in stock for the company although he did not disclose what it is. As Mark Cuban pointed out yesterday…

Want to see the whole world lose their shit ? Get Peter Thiel to partner with Elon and raise the bid for Twitter

… one possible response is for Elon to be joined by one or more like-minded, anti-censorship investors such as Peter Thiel who either build up stakes through the poison pill limit in the process making a management and board replacement by proxy vote the simple outcome, or they just raise the takeover price to a level that even the woke Twitter board can not reject.

In the end, however, the only question is how dedicated is Musk to control Twitter, because if he really wants it, he will get it.